Here are 15 parenting life hacks for if you’ve just had a baby…if you have, congratulations! When I was pregnant I wrote a list of pregnancy life hacks (these are simple tips that are slightly obvious and make everything much easier). I love a good list of life hacks, and since we had the baby there’s a couple of tips that have been really useful to me the second time round. 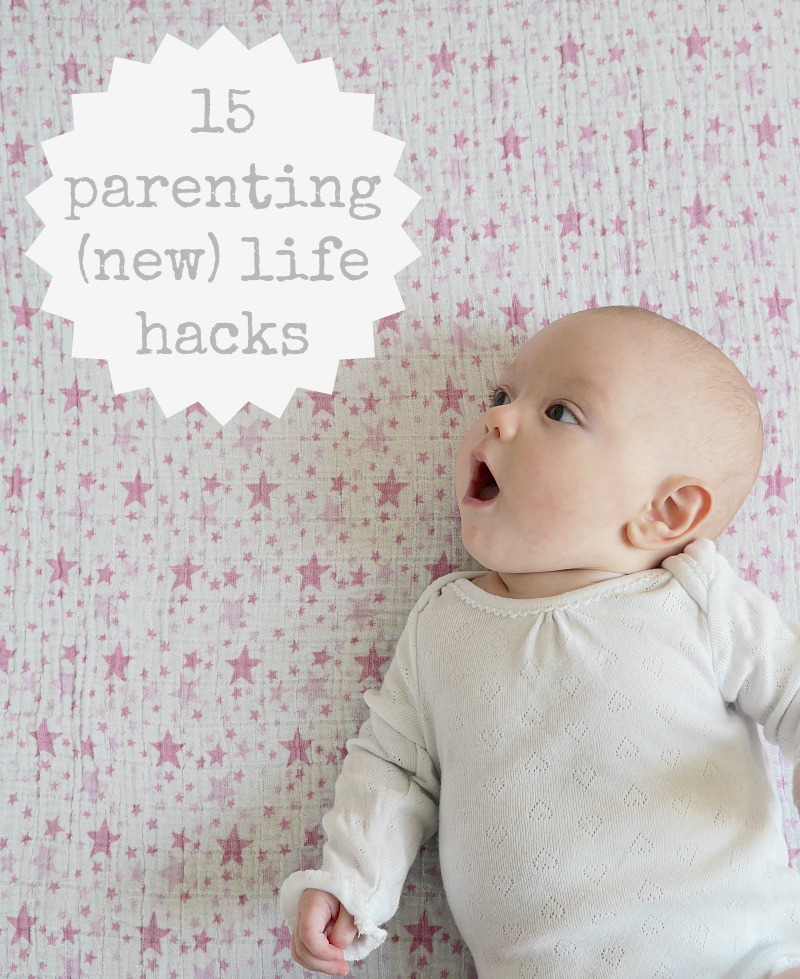 So as my baby is now 15 weeks old, here are 15 parenting life hacks for newborns and babies:

2) Baby won’t sleep in a cot or Moses basket at first? One thing that really helped us was swaddling, where you wrap your baby in a thin piece of material to comfort them and make them feel like they are back in the cosy close confines of the womb (note: here are some NCT guidelines for safe swaddling and a wider discussion on the pros and cons)

You can buy special swaddle wraps with fastenings, but a big piece of light material works just as well. We were sent swaddling blankets from Bambino Mio which are giant versions of your standard muslin cloths,  and you can fold them into a triangle and then fold around your baby. The Bambino Mio wraps are super soft, and covered in a purple star pattern that’s really pretty. They cost £16.99 (you can see them in the photo at the top and also in this post on sisters).

These wraps are a really useful thing to have, because…

3) The great thing about using giant muslins – like the Bambino Mio ones – for swaddle wraps is that they have a multitude of uses after you stop swaddling your baby. You can use them as cot sheets, as a thin summer sleeping sheet for toddlers, a sun shade for the pram, a sun shade for the baby, a picnic blanket, a backdrop for blogging photos, as a duster round the house, as part of a pillow fort, as a superhero cape…the list goes on and on.

4) If you have a very sicky baby, lay a muslin flat in the cot over the sheet and under their head – this way you just have to remove this not the whole sheet (handy in the middle of the night, great for making less washing).

5) White or ambient noise is also useful for calming babies as it mimics the muffled sounds of the womb. The hoover or washing machine might work, but you can download white noise apps which are a lot more portable.

6) And if they are soothed by music but you want to retain your sanity, try Rockabye Baby – lullaby versions of rock and pop songs. There’s everything from Beatles, to Emimen, Radiohead, Bob Marley and even Nirvana.

7) You’re advised to only use cooled boiled water on babies at first to clean them, which isn’t so handy when you go out. However, you can buy WaterWipes that are 99%  purified water (we still use these now).

8) Two quick mum beauty tips. If you already know you won’t wash your hair in the morning because having a baby means there’s never any time, put dry shampoo at night (so when you wake up you don’t have the old lady chalky effect).

9) And if you’re exhausted, don’t be tempted to take your makeup off with a baby wipe, use a hot cloth cleanser instead as it’s almost as easy. Liz Earle is one of the classics, and I also really like REN.

10) When getting off public transport, always get off with you first and the pram backwards (this is also a good tip to go through doors. Read more tips on using public transport with a pram).

11) Make sure your change bag is always packed so you don’t have to do it last minute when you’re already half an hour late. If you’re looking for a bag that’s already incredibly organised, read my review of the fab Pacapod Sydney.

12) Next in our list of parenting life hacks – scratch mits will always fall off, so buy babygros with integrated scratch mits (same goes for socks, so get the ones with feet too). 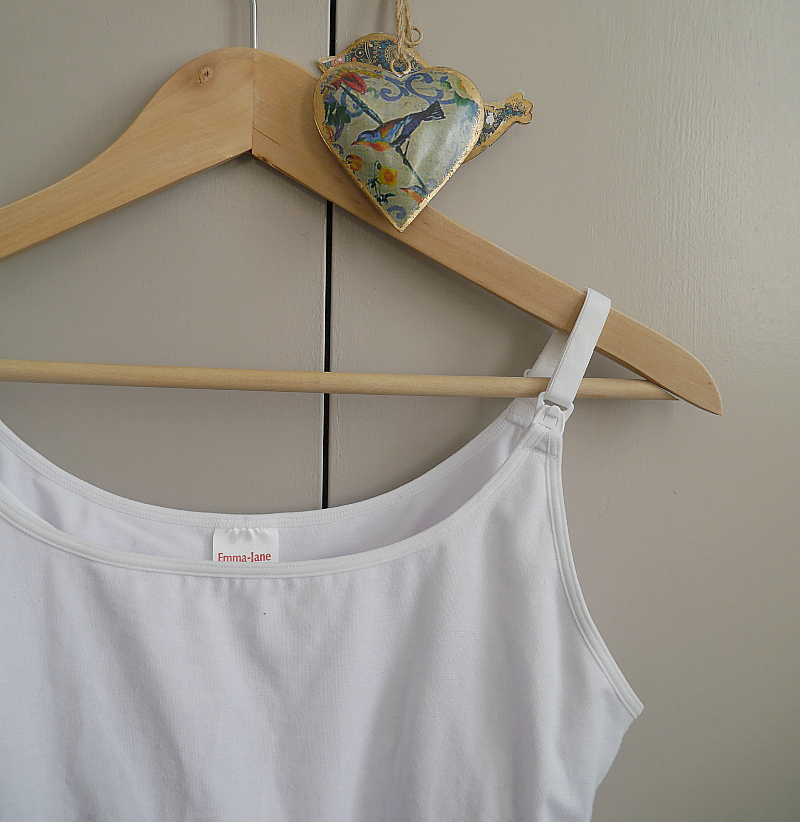 It looks just like a normal basic vest top with spaghetti straps, but has hooks on the straps to allow you to take down the front for easy breastfeeding access – you undo the hooks and can latch the baby on. It’s also really easy to unhook one-handed and the straps are adjustable. 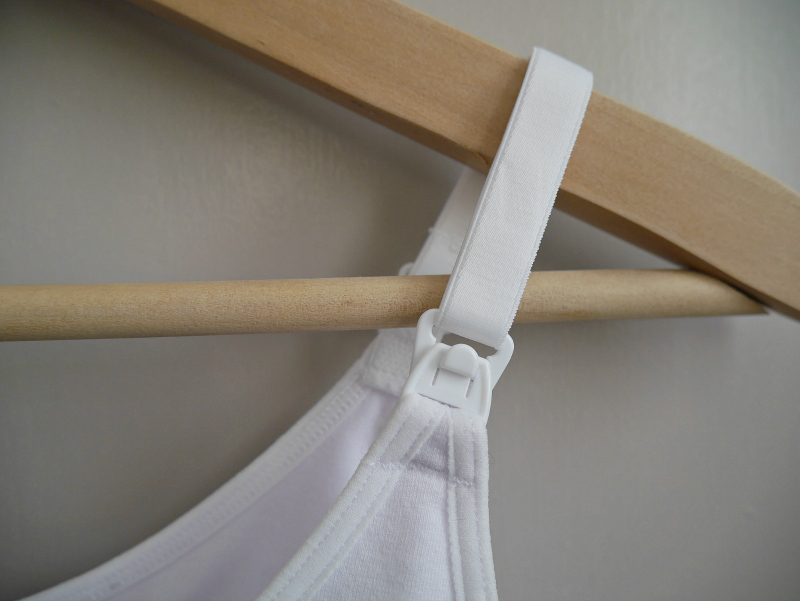 It does have built-in support but isn’t the most supportive of tops, which is something to bear in mind if breastfeeding has gifted you with bigger boobs.

It does makes breastfeeding in public really easy, as you just lift your top up, take the vest down, and latch the baby on. This also mean you don’t get a drafty stomach, which is great in winter. It costs around £19.

14) Next in our list of parenting life hacks? Apparently you produce more breastmilk when you’re pumping if you can see or smell your baby, or if you’re kissing someone. It’s all about the good hormones.

15) And finally in our list of parenting life hacks, from our old baby yoga instructor. She made us all put a post-it note on our phones to remind us to do post-baby pelvic floor exercises. Sounds odd, but just think about how often you pick up your phone…

I was sent the Bambino Mio wraps and the Emma Jane top to review. Everything else is just a personal recommendation. We’ve also been sent a cloth nappy from Bambino Mio to try, so more on this soon (read: when I’m brave enough to try!)

Also, breastfeeding hacks and a review of the SnuzPod bedside crib.