Topsy And Tim: Five Lies And One Truth They Taught Me About Life

Oh, Topsy and Tim. It’s basically Hollyoaks for kids, isn’t it? There’s more pre-school soap opera issues than you can shake a twin stick at.

There’s a Topsy and Tim for that. 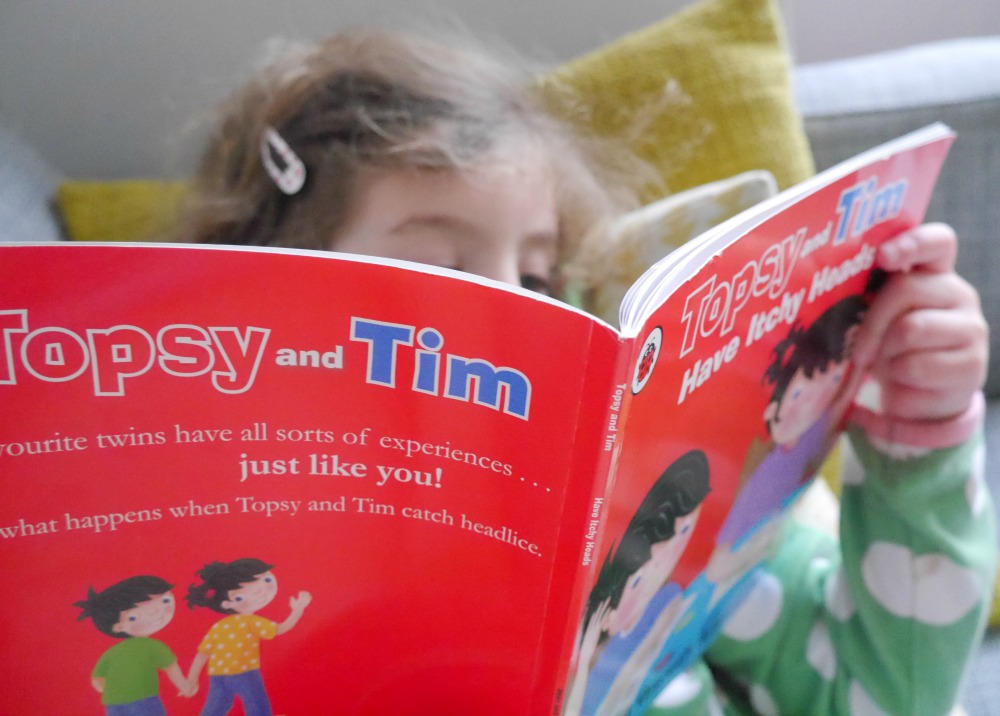 Topsy And Tim And Their Very Calm Mum

We’ve been reading and watching a lot of Topsy and Tim lately due to this and this. It was a firm childhood favourite of mine, it’s now one of my children, which I love as there’s something so wholesome and educational about it. Not least because the TV series is on the no-advert CBeebies and probably because it’s not Paw Patrol.

There’s something for everyone – young people, old people and mums (in the form of Kerry’s hunky fireman dad Carson). The dual character set-up is cleverly used as a stage to explore everyday events and complex emotions and unusually it’s feisty fierce Topsy that’s the twin foil to the more tearful, reluctant Tim.

How is Topsy and Tim’s mum ALWAYS so calm though? She never loses her temper, never shouts. Never gives them ‘just a minute’ when they’ve  ask for a snack for the ten billionth time.

My mum saved my original set of books and there’s now the modern re-writes as well as the TV series. But the more we read and watch, the more I’m beginning to suspect they don’t paint the most accurate picture about life as a parent…

Here Are Five Lies (And One Truth) Topsy and Tim Taught Me About Life: 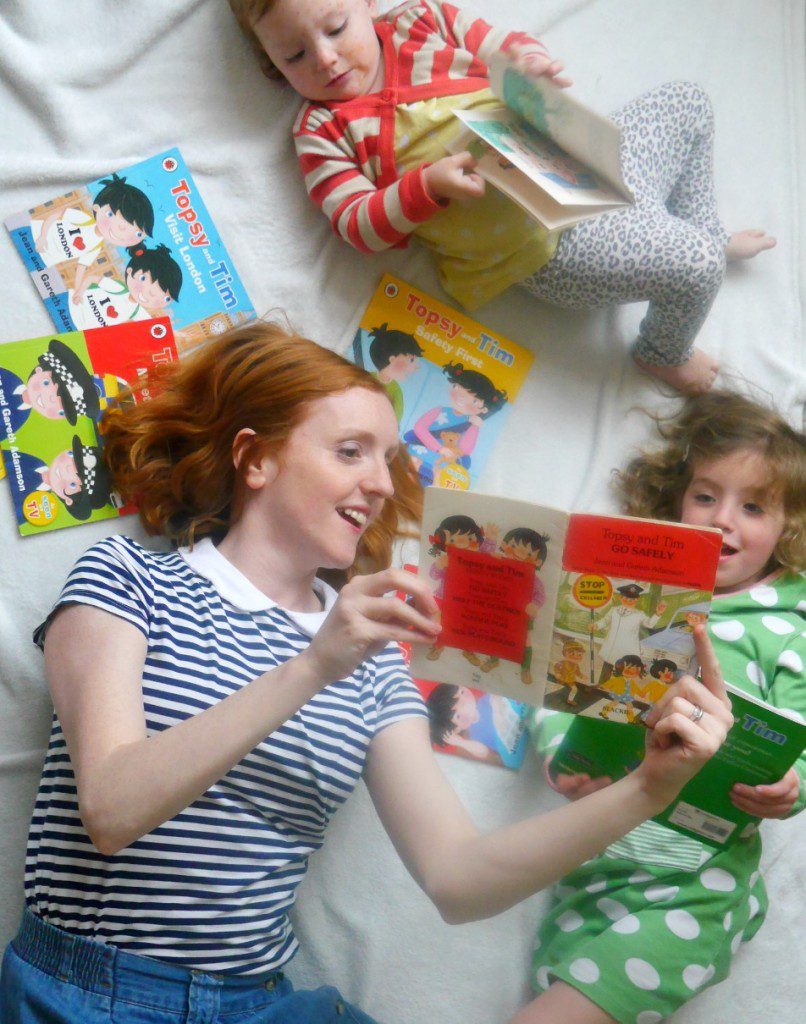 Lie 1: Before starting primary school, the teacher comes round for a home visit
Primary school is a big focus of most four-year-old’s lives (and their mums!) A few weeks before school starts TV Topsy and Tim’s teacher comes round to pay them a pre-school visit and settle and school fears. This one is the cause of much friction in our house because guess what? In real life the teacher *doesn’t* come round. This hasn’t stopped my pre-schooler asking every day when it will happen. Thanks, T&T.

On another note, if there is something in my eye when completely fictional characters start school, there’s no hope for me when it comes to the real thing, is there?

Lie 2: Lovely things happen when there’s a knock on the door
Again in the TV series, there’s an episode where there’s a knock at the door. lo and behold,  it’s a group of friendly old people whose mini bus has broken down. They make music together and forge some beautiful friendships.

Does that happen in real life? Nope, not around here (it’s usually people wanting to replace our windows, other people’s deliveries or fish salesmen, randomly enough).

Lie 3: Children need to be taught (and learn) strict lessons
The very early original books have more than a touch of the Victorian / draconian about them. There’s none of this modern child-lead parenting malarky, nurturing, considering feelings or anything fancy like that. 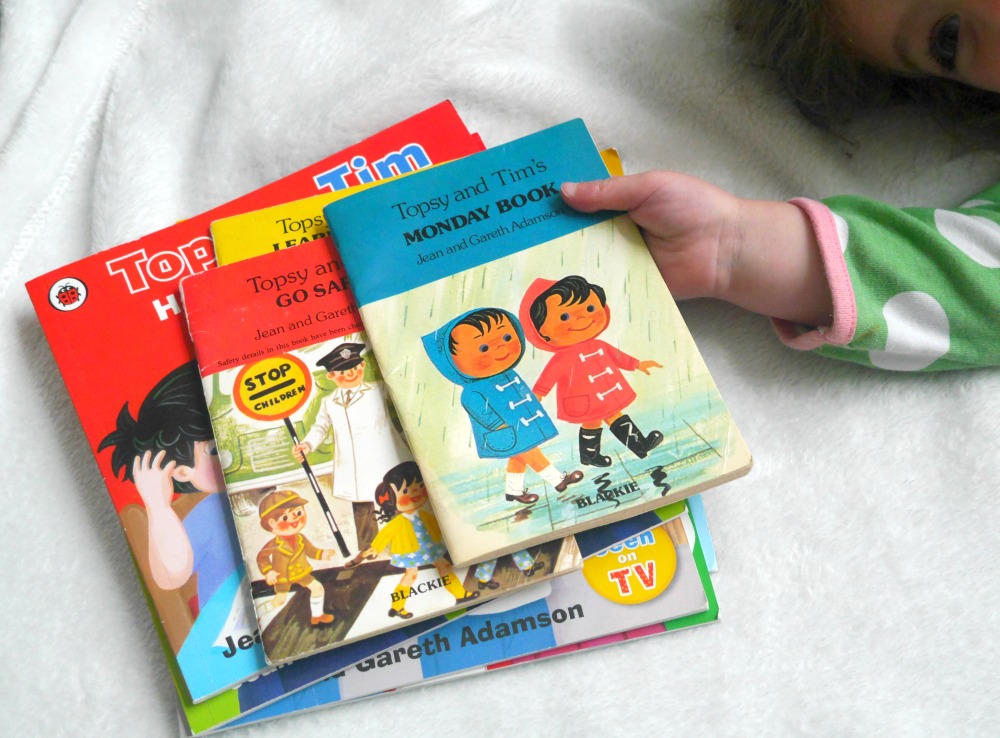 In the Monday Book, Tim doesn’t want to wear his heavy and uncomfortable wellies on a rainy day so his dad flies into a rage and decides to teach him a lesson. Predictably Tim gets soaked and unhappy. but his mum doesn’t suddenly provide spare socks and a hundred packs of baby wipes. Oh no, it’s just Tim and his wet feet. He wears his wellies home. I dread to think what happens in the Tuesday book.

And in Topsy and Tim Go Safely, everyone’s favourite lovable scamp Tony Welch gets run over by a car and hospitalised after he doesn’t pay attention to the road safety lecture. How’s that for hard justice? Yikes. 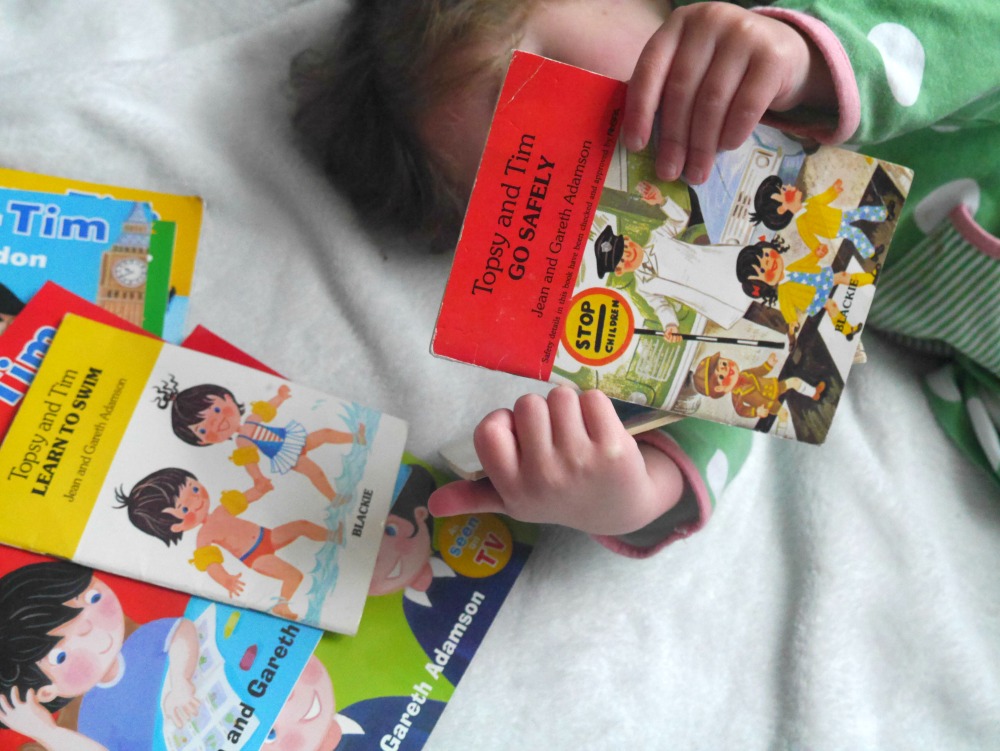 Lie 4: Mums are calm, level headed and patient all the time
I’ve seen much speculation about Topsy and Tim’s mum who is calm at all times, even in the face of so many noisy children doing things like breaking her vases left right and centre. Is it valium? Is she a robot? What is she doing on all her trips ‘away’? Needless to say, mums* aren’t calm and patient all the time (* me).

Topsy and Tim’s mum (played by actress Anna Acton in the TV series) can’t be based on any kind of real mum as she doesn’t have a) a Selfish Mother sweatshirt under her dungarees b) ten hundred striped tops c) one eye on the clock and a hand inching impatiently towards the wine fridge at all times.

Later on, In Topsy and Tim and the New Baby. Topsy and Tim’s mum has a new baby and remains calm…which is something I, and many other mums, were unable to do.

Lie 5: London is a great place to take kids
London with kids *is* great, don’t get me wrong. It’s full of amazing things to do (like this and this) but it’s still London, so you get people giving you evils for having a child on public transport, pushing in front of your pram on the tube and tutting at you for daring to look in their direction. But in the Topsy and Tim go to London book, ‘London’ is a clean and shiny place with no queues, train delays, rain or manky pigeons hopping round on one foot. Where is this place? I want to live there. 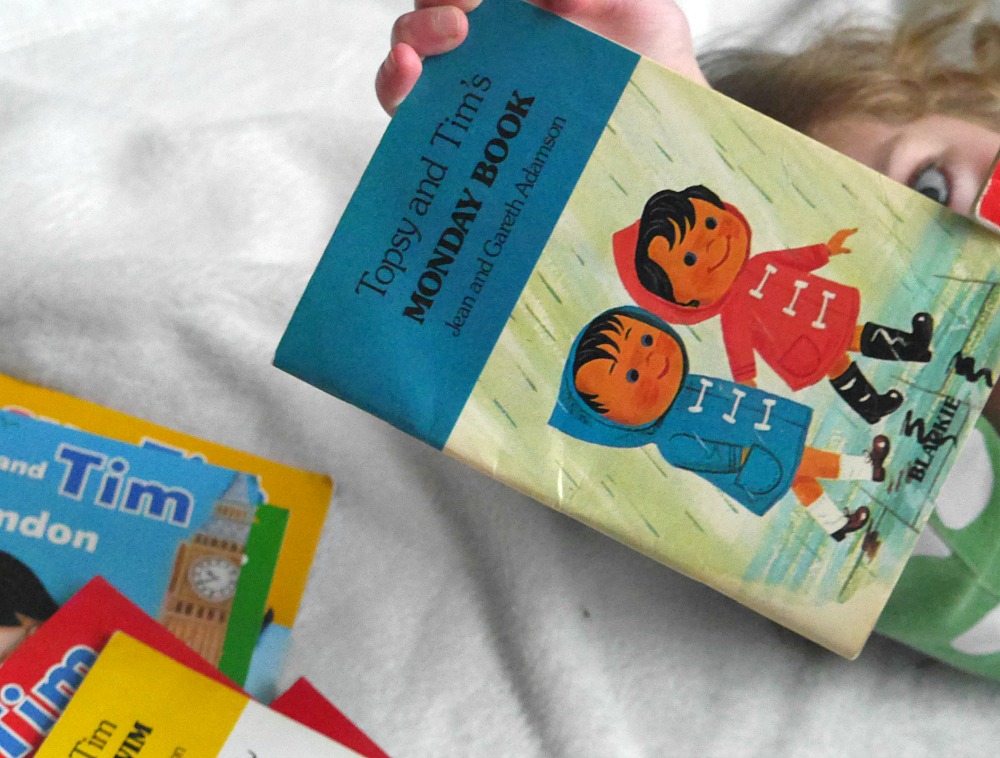 My post-Topsy and Tim childhood consisted of watching 999, a 90’s programme so fraught with potential death traps everywhere that means I now see the danger in everything on TV and spend lots of time expecting something awful to happen at all times.

The later series of Topsy and Tim doesn’t disappoint in this regard. Topsy’s stomach pain on the camping trip leads into appendicitis, an emergency dash and long hospital stay, Tim’s fun eye test leads to glasses, but then there’s something else…

‘The dog’s not going to die is it?’ I said to Alex during the first-watch of the ‘very special’ episode with the poorly dog in the latest series (if you’ve seen it, you’ll know what I mean).

And then the dog died.

RIP Mossy; thanks for keeping us on our toes.

Once You’ve Read My Post On Topsy And Tim, Read These: