We’ve Been Playing With Mermaid Barbies and Barbie Dreamtopia

We were recently offered a Barbie Dreamtopia review (it’s the new, brightly coloured Barbie range). Here’s what we thought.

But first, can you be a feminist mum and let your children play with Barbies? It’s a decades-old debate but one I’ve been thinking of recently. 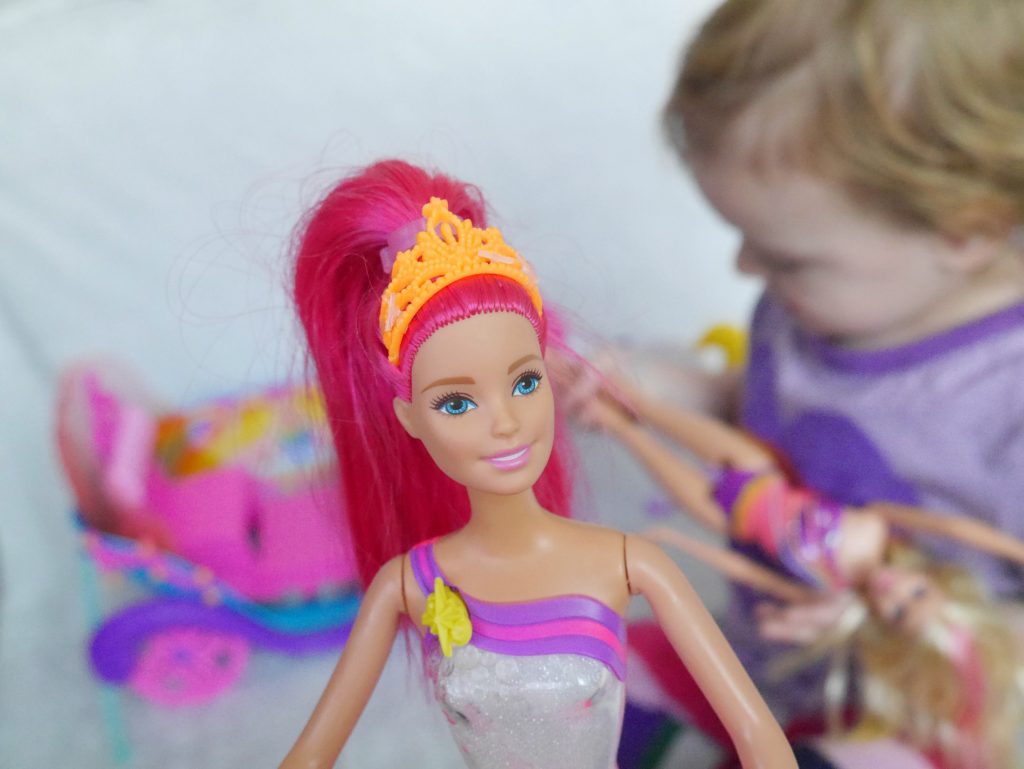 Like most girls of a certain era, I grew up playing with Barbies (I had this one – anyone else?). I loved her; she was always the more glamorous older sister of my motley crew of really odd inherited-from-my-older-cousin Sindy dolls.

But as a mum of girls I’ve always been slightly more, shall we say, suspicious…

It’s partly because of the criticisms about unrealistic Barbie body shape and self-esteem at such an impressionable age (it’s obviously difficult to tell the conscious or unconscious effect this had on me, although I don’t ever remember thinking Barbie had a realistic body shape in the first place – my mum had one of those – and Barbie was just Barbie).

It’s partly because we’ve always tried to keep things fairly gender-neutral around here and not automatically push them towards anything too girly – which isn’t always always easy, as we found out with our pretty pants shopping trip – but Barbie has always seemed like the most girly toy you can get.

And also, the focus is our house has always been on things like superheros and Star Wars. Then a love of Frozen started and suddenly there were more princesses in the mix. A recent trip to my parent’s house unearthed my old Barbie, which both girls were fascinated with. And I was impressed to recently read about Mattel’s commitment to new, more realistic Barbie body shapes.

So when we were asked about a Barbie Dreamtopia review, I decided to give the girls the choice to see if it was something they were interested in.

So in some unsurprising news, here’s what we thought of the new Barbie Dreamtopia range: 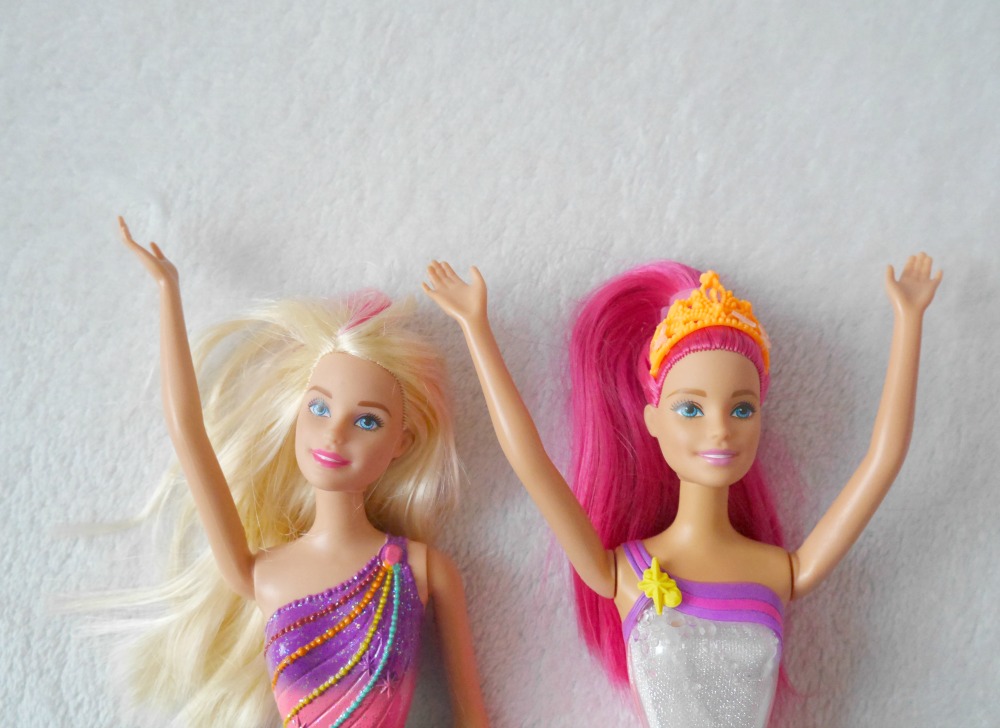 The Barbie Dreamtopia range is a colourful world imagined by Barbie’s sister. We were sent the Barbie Rainbow Cave Light Show doll (pink hair, on the right), plus Dreamtopia carriage which comes with horse and another doll (pink streak, on the left).

They are colourful and cartoony – very Katy Perry-esque – with painted tops, skirts and shoes, which were taken off within seconds, of course (why do children always make dolls as naked as possible?)

The Rainbow Light Barbie also has a pretty magical trick up her sleeve: 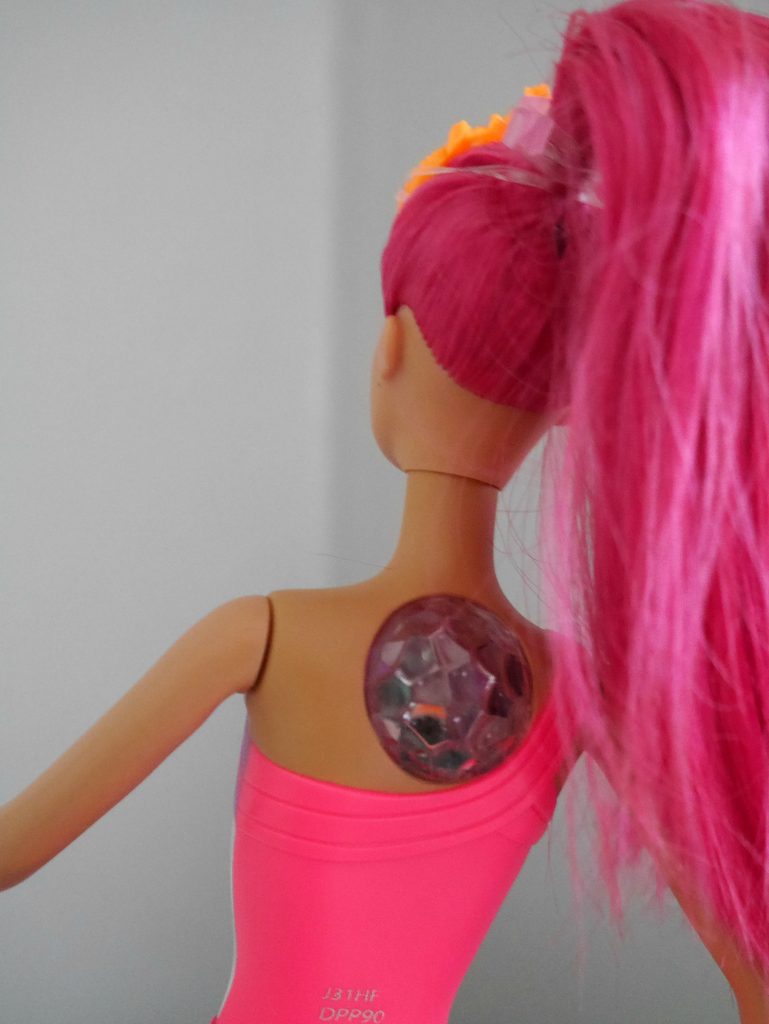 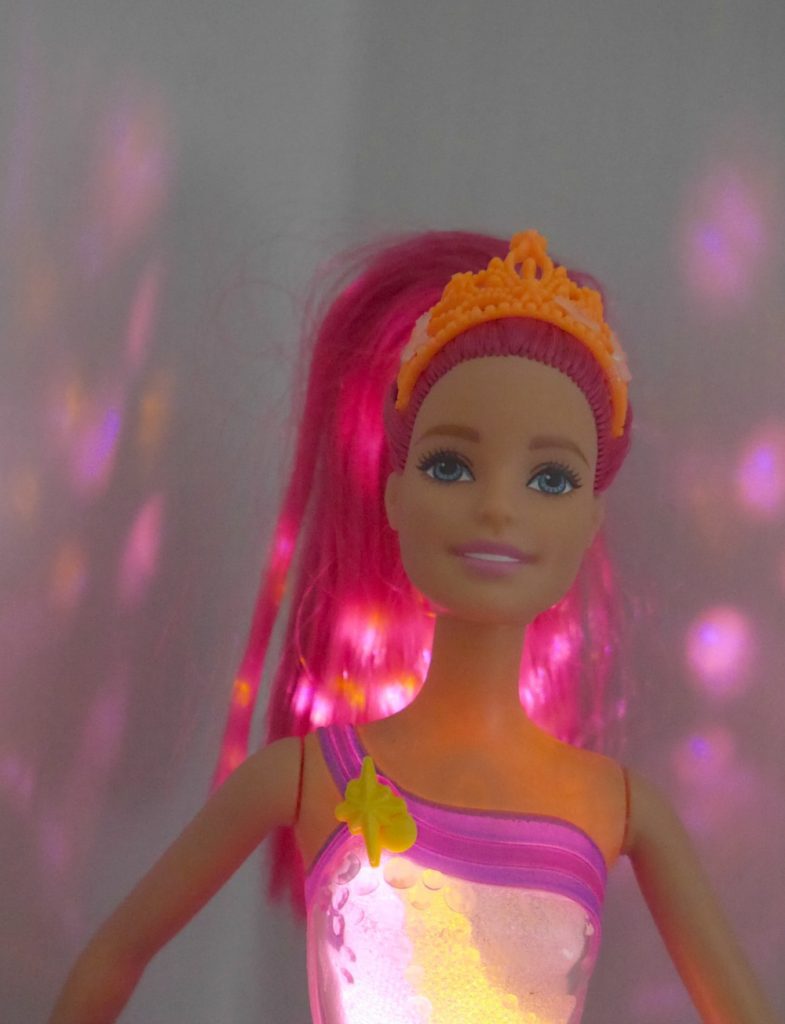 And while I’m not sure the carriage is something I’d have ever chosen for them, both of mine loved playing with it: 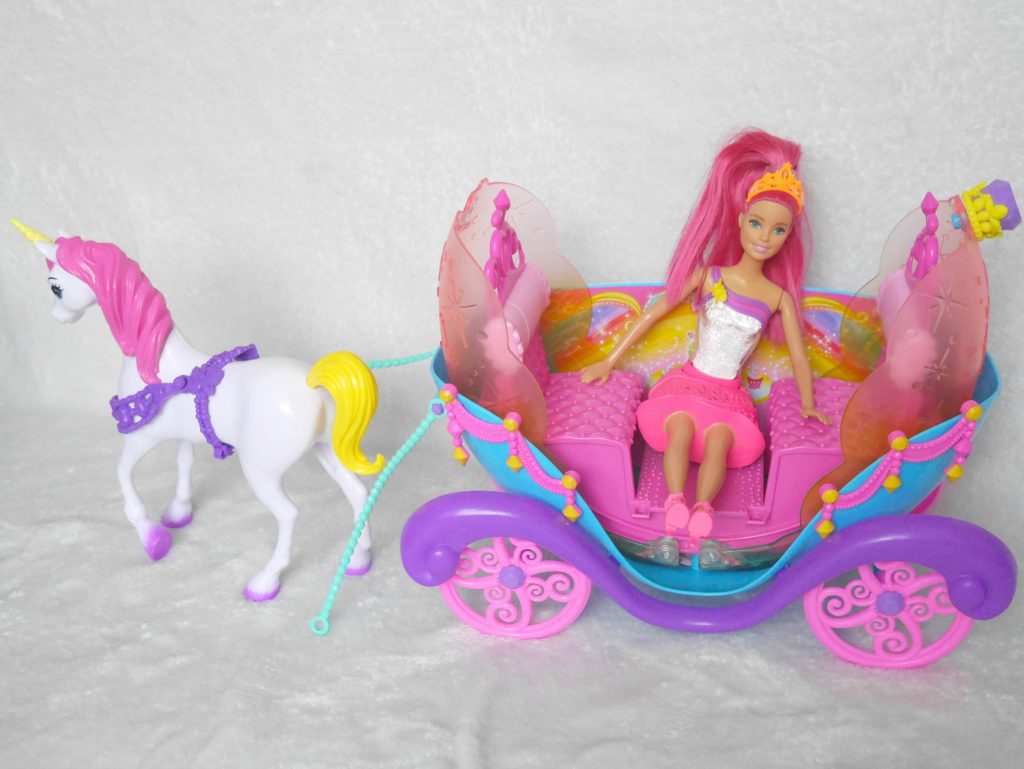 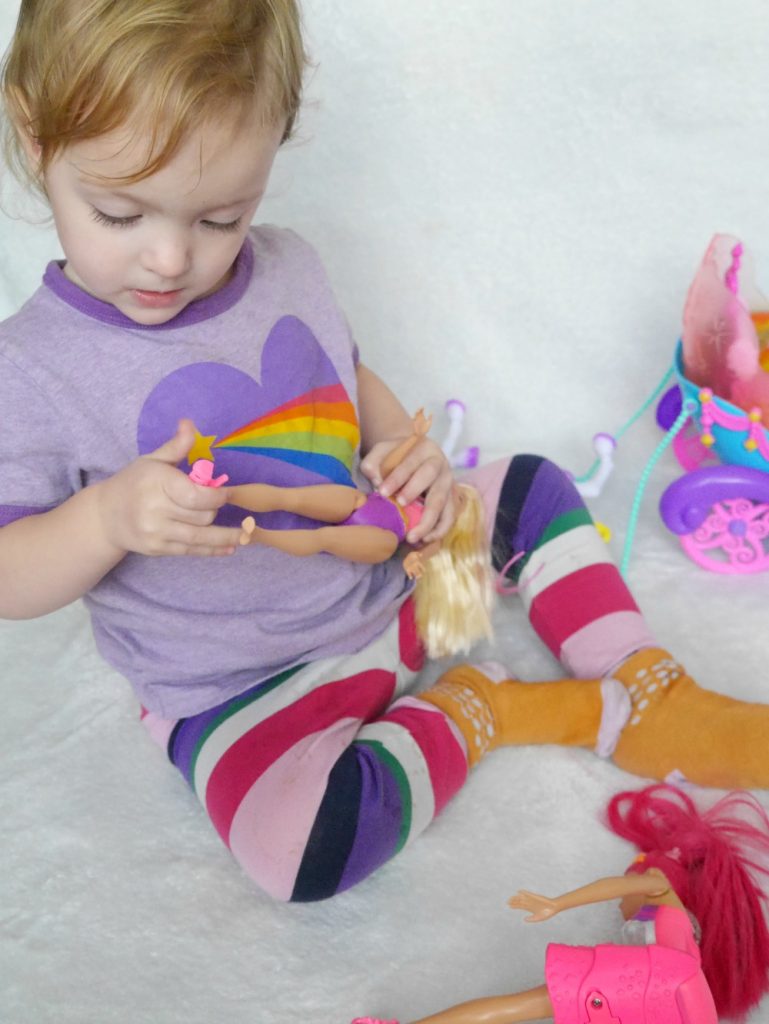 The brilliant thing I remember about Barbie was that she was always a blank slate for whatever imaginative play you were doing. She was never just the character she came as – she was a mother, teacher, astronaut or millions of other things. And also always the boy character on days when Action Man was out of business, right? I did worry that with the painted tops – and Dream Cove Barbie’s plastic ‘skirt’ that hides her light mechanism – they’d be more ‘stuck’ as their characters, but this hasn’t really stopped the imaginative play scenarios.

There’s also a new Dreamtopia app (we were sent a Kindle Fire to play it on – which is brilliant as you can set really strict time limits). In the app you can either be a hairdresser or a fashion stylist; it is very pink and frilly, but fun. There are a lot of in-app purchases on offer though, although you can happily play with what’s on offer for free. I really like the idea of the tech adding the extra dimension to play, too. 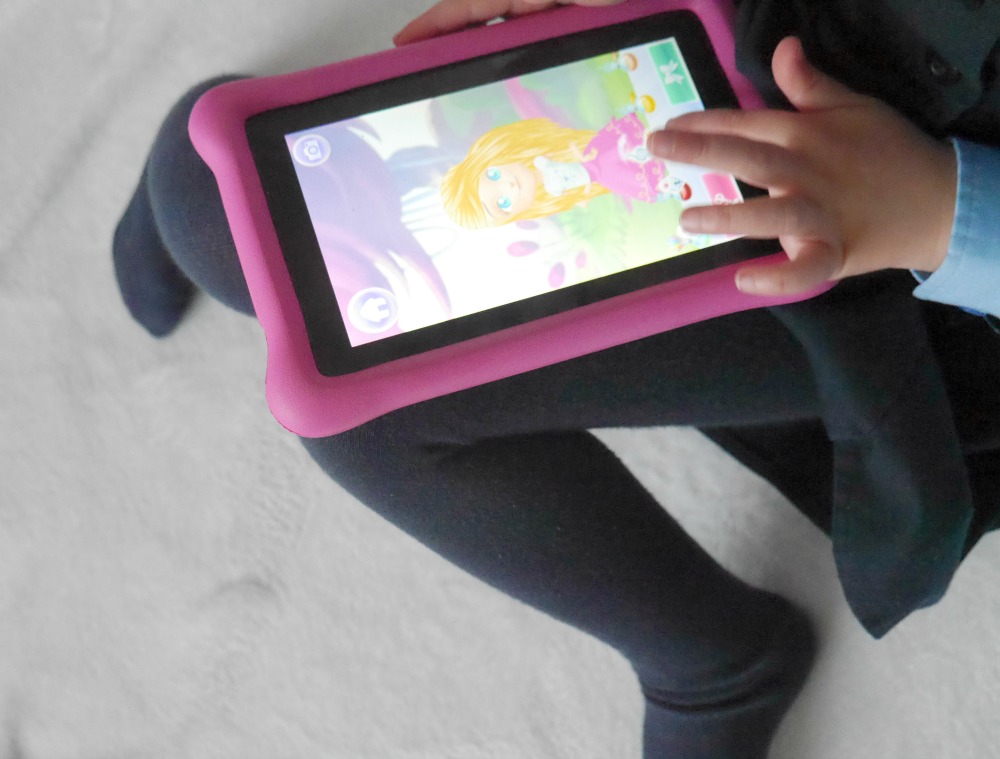 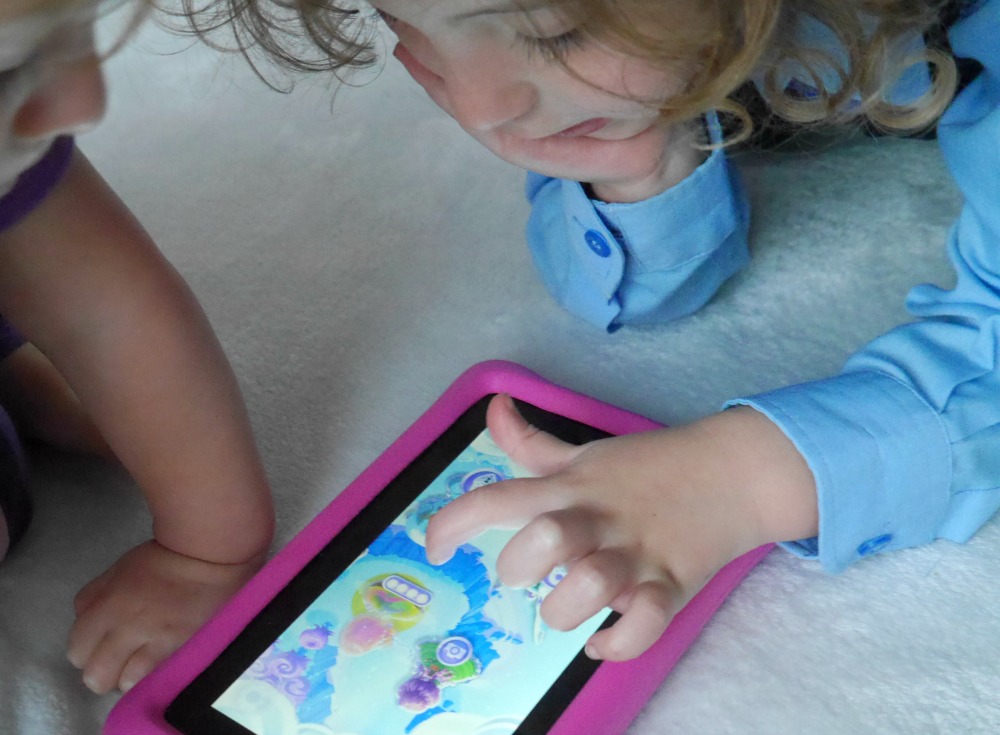 This has come in really handy on a couple of recent train journeys. 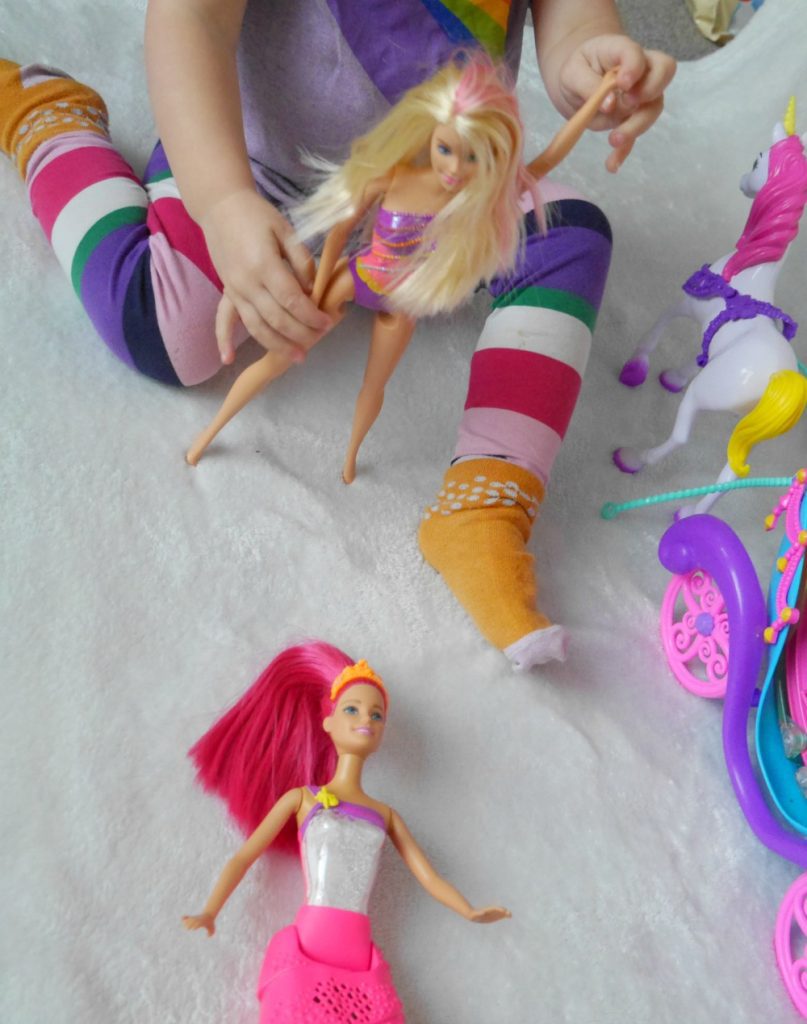 The Barbie Dreamtopia range has been a big hit in our house (if you already have a Barbie fan in your life then they might make for good Christmas present ideas as they are so different to the usual range). And essentially Barbie is just a doll, one which they have loved playing with. I think that as with pink being OK as long as it’s not the only colour offered, Barbie has fitted in to the whole range of different toys they can choose from.

We were sent the Dreamtopia Rainbow Cove Light Show Princess Barbie (around £19.99) and the Dreamtopia Princess Horse & Carriage which comes with one doll (around £44.99) along with the Kindle Fire to play the new app. More posts…if baby milestone cards were made for mums and things I love about being the mum of two