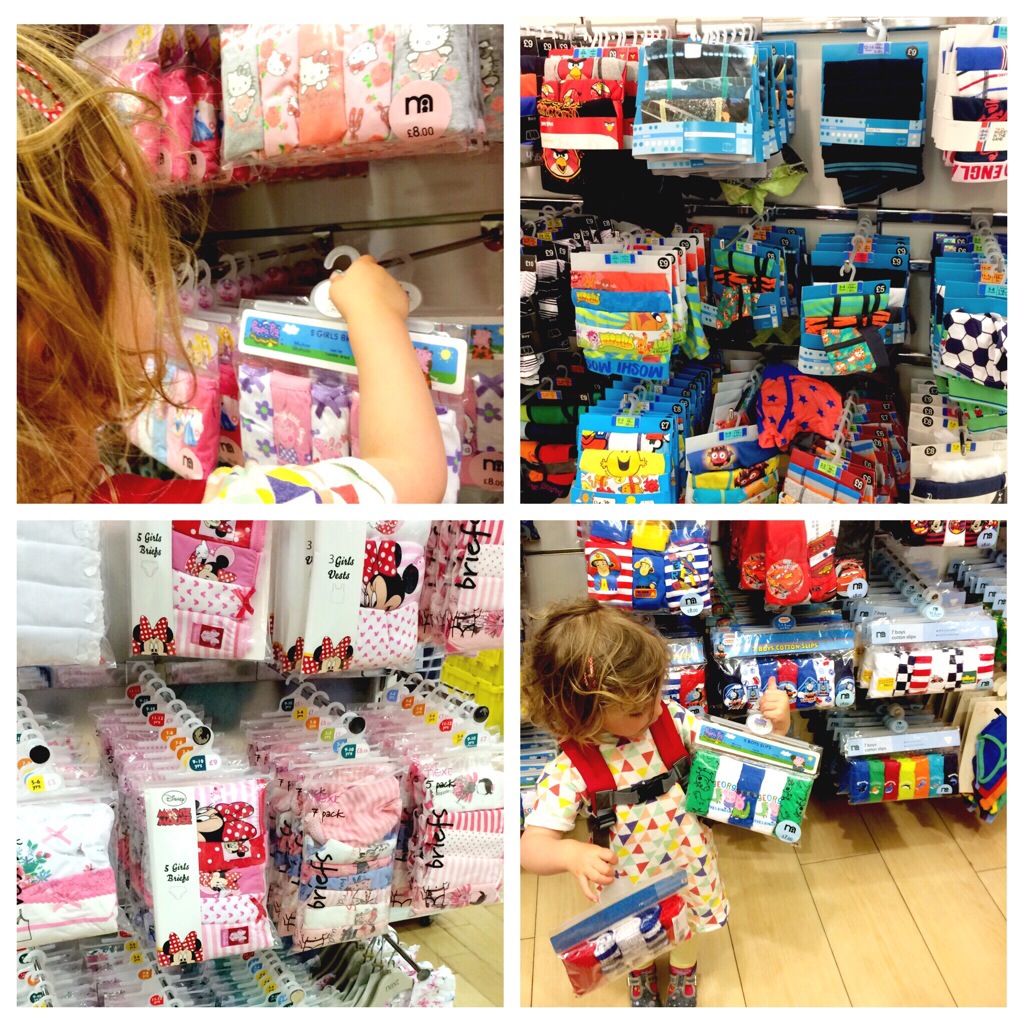 Taking your toddler to buy their first pair of proper pants isn’t quite on a par with a first bra fitting, is it? At two, they’re over a decade away from being aware enough to suffer the same red-faced mortification and spine tingling embarrassment as a teenager. But as Eliza and I approached the shops on a ‘grown-up pants’ buying mission, it still seemed like a sweet rite of passage, all the same.

With the dreaded potty training underway, ahead of the shopping trip we’d decided to bite the ‘no cartoon clothes’ bullet and go for character knickers. After some discussion about which ones she wanted, Eliza named her wish list as Thomas the Tank, anyone from Cars and Neep from Abney and Teal. I figured Neep might be quite niche, but we had a decent shot of getting one of the other two….right?

So we trundled up to the shops, starting at *unnamed big brand children’s retailer.* We located the underwear display at the back, neatly swerved the tempting toy display, and approached.

It was a huge wall of pants. There were three different sorts of Thomas, Cars, George Pig waving a dinosaur, and even new favourite Fireman Sam. Bold, bright colours. Great! I thought. Easy.

But oh wait…what’s this? I suddenly realised. Oh right; These are the BOYS pants. And as much as I normally buy her tops and leggings and jumpers from either department – or preferably online from retailers that don’t make a distinction – I wasn’t sure boys pants would fit well or be at all comfortable.

So bracing myself, I looked in the other direction to locate the ones for girls. And was hit by the inevitable. There was Minnie Mouse. Fairies. Dancing bunnies. A pack of Disney Princesses. Any cartoon character you liked, as long as they were female and you wanted it in pastels and pink.

“Where are the Thomas pants, Mummy?” Eliza asked, as I desperately scanned for something, anything that might fit. But no. So we bid a hasty retreat.

We went in four different stores after that, but it was all the same depressing story. Red and blue Thomas, Sam, Cars, Angry Birds for boys. And pink, fairies and Disney for girls. And the girls pants were all so, well girly. Swirly patterns, and lace, and bows. Incredibly feminine. With a hint of white or purple pastels, if you were lucky.

As Eliza was becoming a dangerous combination of both bored and tearful, I grabbed the nearest and most suitable, a pack of pink Peppas. One pair even bearing the nauseating legend ‘I’m so pretty’, I found out at home. Don’t get me wrong, she loves Peppa. It just wasn’t what she wanted.

I didn’t name any of the retailers in this sorry story, as I imagine they are all much the same. But come on guys, there must be a demand. Eliza loves Peppa and Holly as much as Ben, George Pig, Thomas, and Sam. And where’s the choice for boys? Toddler boys watch and love exactly the same cartoons. And would surely welcome Peppa, or Holly, or someone from Frozen.

It’s not a great situation, is it? I’m not saying there shouldn’t be pink pants for girls, or that lots of girls don’t like princesses. They do and that’s fine. But it should just be one option available from a whole rainbow. What lesson are we teaching our little future feminists if they do have a choice, as long as it’s pink (or possibly white)?

I know it’s not a huge thing to get my knickers in a twist about. But why are we unnecessarily pigeonholing our children with something as trivial as pants, at such an early age?

Why not just let pants be pants, and children be children?