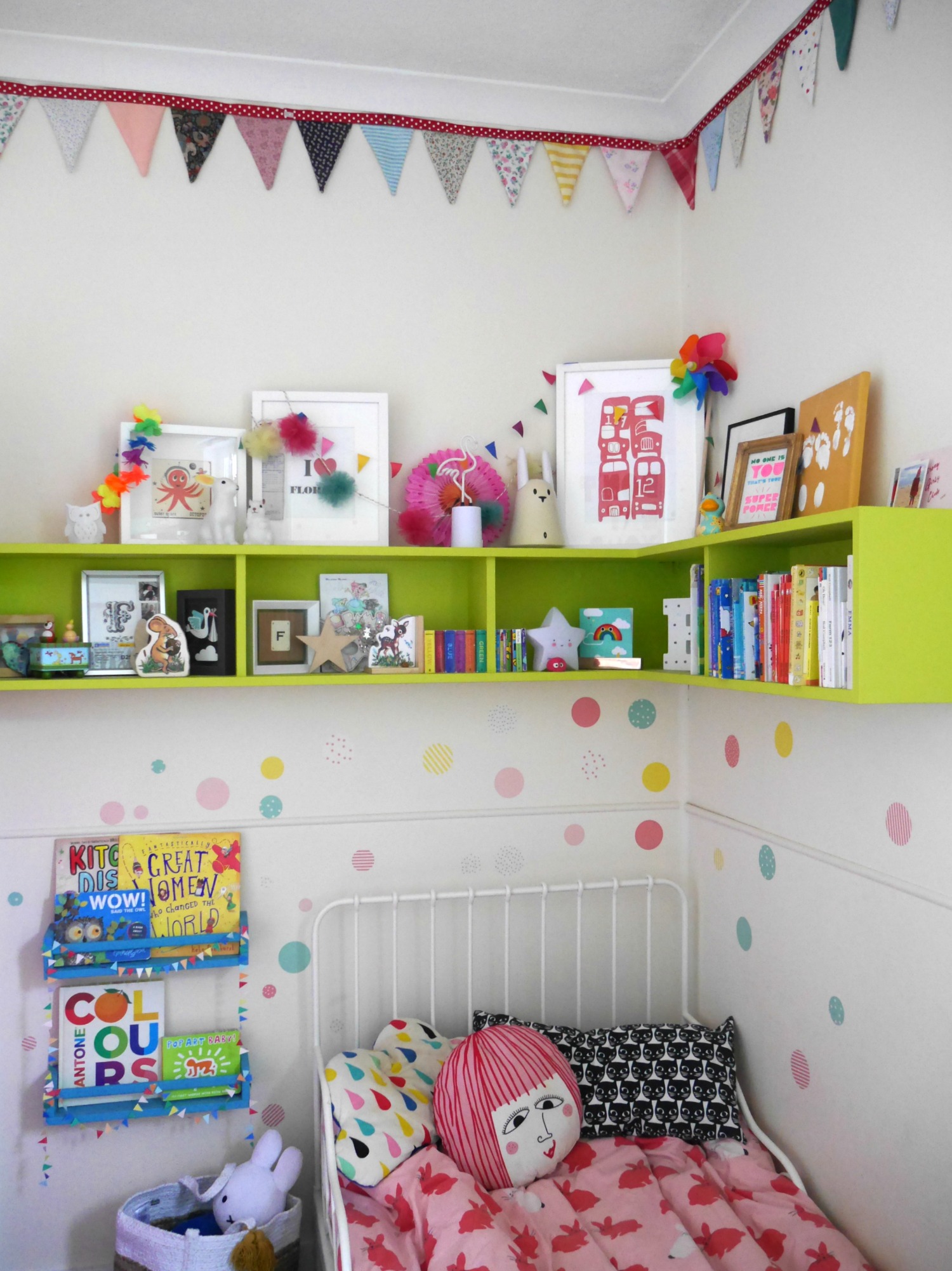 The children’s rooms are my favourite in the house, as they can be as colourful and fun as you like, and let’s face it, you can stick all the toys in there away from the rest of the house and not worry about them, can’t you?

Anyway! F’s room was inherited from her sister a few years ago (you can see it as it was a few years ago here) after E moved into our room, after we moved up into our then-newly converted loft.

We didn’t change the room a whole lot at once at first – as she still slept in with us for most of the night – so we’re gradually making changes now.

It’s a long, thin room with the only original fireplace in the house left in (a much nicer one than the hideous red fireplace we inherited in one of the other rooms). I think like a lot of parents we went for the failsafe of neutral walls and floor and bright everything else.

We were recently sent some products from Vertbaudet, a company I love which has a great range of children’s homeware which is it’s really fun, colourful and reasonably priced.

Storage: Although storage is the enemy of Marie Kondo (who thinks it’s just another place to add clutter) children generally have a lot of clutter, don’t they? So it makes sense to have a lot of storage! F’s room used to have a giant walk-in wardrobe and a big cupboard which we sacrificed for the loft stairs, so now this room narrow and doesn’t have a lot of built-in storage, apart from alcove shelves on one side. There are some really good Vertbaudet storage ideas, I love these baskets as you can just shove everything in them and it’s out of sight. out of mind (right?)

This Vertbaudet toy mat / bag is also a genius idea – you can lay it out to use a a play mat and then scoop up the mat and everything else to turn it into a bag. This is great for all those little things. And Lego.

Paint: While painting the entire room is a bigger project and a massive faff, it’s much quicker and easier to paint furniture or smaller areas instead. We inherited the box shelves on the wall from our previous owner, but decided to paint them a bright colour.

You also can see more of the children’s bedroom colourful doors which we painted pink and purple, and our magnetic chalkboard wall which you really don’t need much space for, as well as our IKEA hack bookshelves.

Wall stickers: I you don’t want to wallpaper or paint a room then wall stickers are a good option as a) they’re removable b) low effort. We liked these Vertbaudet circle stickers, as they came in a mix of sizes and colours.

Washi tape: We also use a lot of washi tape in the children’s rooms, because it isn’t great for wrapping presents but it is good for sticking on the wall temporarily and not removing all the paint.

Here are our DIY wall stickers and our washi tape rainbow shelves.

Rugs: All of the carpet in our house is practical hard-wearing greige, which is great for spills – and slime – but not so pretty. We bought this ourselves from Vertbaudet’s children’s rugs a while ago now – it’s the Harlequin rug – and I love it, it’s colourful and a good play space.

Plus, it’s brilliant to lie on, and what more could you want?

Thanks so much to Vertbaudet for sending us the products – this post contains affiliate links, which means if you click and then buy something I receive a really small percentage

HELLO to a) Friday b) the weekend and c) anyone wh

SO, has everyone with a new school starter started

Is this it now, weather-wise, until next year? Are

‘What are you going to do NOW?’ Is the questio

How are all the new school starters getting on (an

Here’s to strong women, may we know them, may we

It’s SEPTEMBER (how is it already September? Whe

After a week of going arghhhh 😱(anyone / everyo


Error: API requests are being delayed for this account. New posts will not be retrieved.