Pregnancy week 22: footprints, and finding out the sex 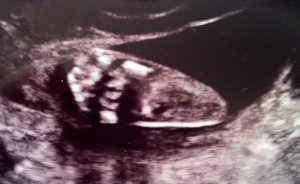 As well as marking our second wedding anniversary, week 22 also bought with it the anomaly scan. In addition to checking out all was as it should be with Baby C, it was a chance where we could, potentially, find out the sex. I asked at the 12-week scan, but they boringly wouldn’t even make a guess at that point (I’ve also been Googling every old wives tale and theory on sex prediction out there; not-so-surprisingly based on it being 50 / 50, some turned out to be right and some were wrong).

Alex and I agreed at the start of pregnancy that we’d find out if he/she was a boy/girl. I’m a really impatient person – I blame modern life – and I couldn’t bear the thought of waiting to find out something this big, especially when it was something we could know. And unlike the whole process of trying to conceive, this was an element was in our control. We also liked the idea of bonding with the baby on this level, and, on a purely practical side, being able to plan and buy things ahead of time – not so much that things will be all pink or all blue, but so they don’t have to be neutral.

When it came to the scan, I was lots less nervous, as unlike twelve weeks I knew there was something actually in there. And it was as amazing as last time – we’re in good hands as King’s is a hugely important centre for fetal medicine and research. Both times we’ve had completely lovely sonographers, who have taken over an hour to scan everything in great detail and explain it all for us to see, including the spine, all the fingers and toes and each chamber of the heart. We both received a perfect bill of baby health, which was a big relief.

And the gender? I know a lot of people don’t find out so they can have surprise at the moment of birth, which is lovely; however to us it was always going to be a surprise, whenever we found it out. And I can’t imagine a bigger or nicer surprise than the one we had on that day.