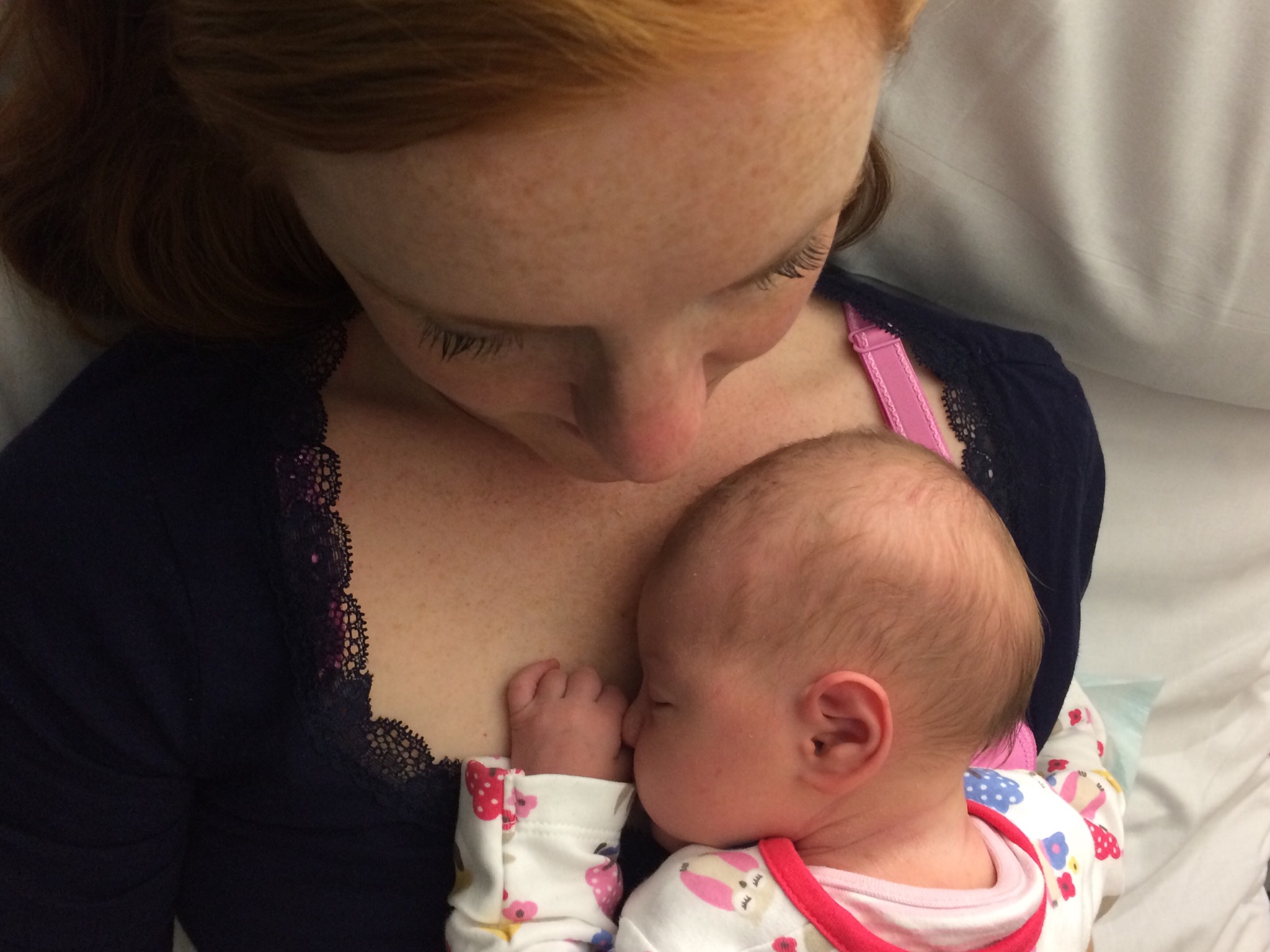 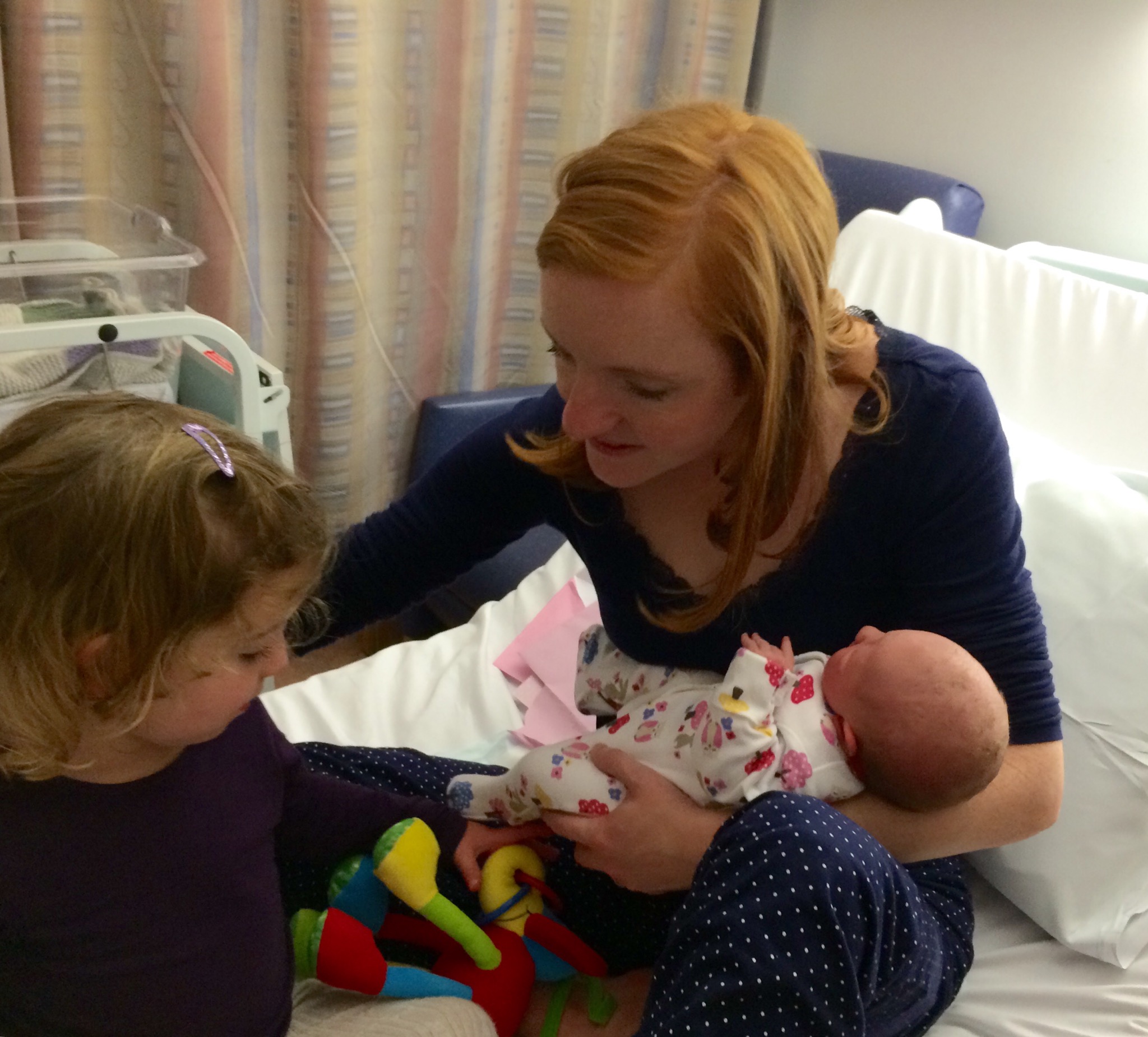 “Wake up, I’m having contractions.” I whispered into the darkness at my husband. He sat straight up “So this is it?” “Yes!” I paused “I think…”

I’d woken at 12am from a vivid dream with a burning sensation in my stomach. I was four days overdue at that point and had been impatiently waiting for something, anything to happen. But if it was contractions they didn’t seem very regular. Could it be a false alarm?

I had a couple more after that, but distracted myself with messaging the only person still awake, my friend in the US. Just before 2am I timed the contractions at six minutes apart, then immediately after at four. Four minutes? That sounded…promising. They were also becoming breathtakingly uncomfortable. So I woke up my sleeping husband.

Alex timed a few at just under four minutes apart; we rang the labour ward and on hearing it was a second baby they told us to come straight in. We called for a taxi and got my hospital bag ready, and I woke my parents to be on Eliza alert. It all seemed to be happening quickly. My contractions intensified, and we went from ’20 minutes wait for the taxi is fine’ to ‘Where’s the taxi?!’ pretty fast.

And after that? I went to kiss sleeping Eliza goodbye, then the taxi finally turned up and I remember the quiet and rainy ride through the empty streets to the hospital, I remember the radio playing a song I’d heard shortly after Eliza was born, and I remember having a huge contraction and gripping Alex’s hand as tight as I could to avoid shouting out (although it was surely very obvious – what else would be happening to a heavily pregnant woman and her husband, on the way to the hospital in the middle of the night?)

The hospital was deserted and we made it up to the maternity ward at 3am, but even at this point I still thought it might not be established labour and they could send us home (looking back I have no idea why). It turned out to be a busy night for babies and the only spare delivery room was being cleaned, so we had to wait in reception.

But after a contraction that was so painful I was bent double on the floor, the midwife rushed us in. “I really hope this is it and I’m not wasting your time” I remember saying, which made her laugh. “Don’t worry! You are definitely in labour” she said as examined me “…and 8cm dilated.” I shouted out “Is that ALL?!” Which, of course, everyone thought was hilarious.

It was surreal, strange and lovely to think that we’d meet our baby so soon. The lights were dimmed and we put on my labour playlist. The next hour was all at once both blurry and crystal clear, but I remember the following:

* Asking for gas and air – ah, lovely lovely gas and air – which made it all better and let me breathe through the rapidly intensifying contractions
* Making interim small talk between about the midwife strike, the amount of accidental Coldplay on my playlist, and my previous birth experience
* Not giving a single thought to changing into my ‘giving birth’ top, but staying in the one I was already wearing, then just wearing my bra
* The midwife leaving the room “She clearly thinks it’ll be ages!” I said to Alex, just before she came back in with a delivery trolley and a second midwife
* Thinking it would still be a while before anything happened as my waters hadn’t broken…
* My waters immediately breaking (same as with E, right at the end)
* The gas and air not working, biting the mouthpiece instead
* The contractions piling up and my body starting to push by itself
* Being totally consumed by the pain and the moment and telling myself to just get the baby out
* The midwife telling me to listen to my body and do whatever felt right
* Pushing, the head being out
* And then pausing…

Then with one final push, Florence was born, opening her mouth with a loud wail as she was placed upon my chest.

I’ve been thinking about what made it so much better this time. It wasn’t just that it was quick (although it was quick last time, this time my entire labour was officially timed as an hour and 18 minutes, starting from when we got to hospital) or that this made it any less painful – it really hurt! Especially as she came out with her hand by her face – the stitches, ouch. It helped that I wasn’t induced, that it was a different and less chaotic hospital, and that I didn’t get to 10cm on a ward with bright lights and panic, and there were a couple of other things we did differently. But this time I also knew what was happening, knew I could do it, my body took over and I felt far more in control.

Our delivery midwife was also amazing – kind, calm, funny, supportive – said all the right positive things, and was really conscious of what we wanted. Post-birth I had to almost immediately go on a drip for four hours due to the blood-thinning injections I’d been taking, but she delayed cord clamping for as long as possible and gave us the option to delay the baby weighing for an hour so we could have extended skin-to-skin.

After the rush of the birth, it felt like the world was on hold just for us. I held the baby, she breastfed, then Alex held her. We chatted about everything and nothing while we watched the dawn creep up and the sky turn golden on Florence’s first morning ever in the world.

Afterwards we were taken to the ward where we stayed for the rest of the day, and where Eliza met her sister. All our visitors left mid-afternoon, and I was supposed to sleep but couldn’t, totally keyed up on endorphins and love for the tiny new baby I couldn’t put down or stop staring at.

After last time, I always thought positive births happened to other people but I was amazed – and still am – at how well it went. I felt almost superhuman when she was born, completely euphoric and seriously elated. I don’t think anything can ever beat that feeling.

You can also read Eliza’s birth story and all of my weekly pregnancy updates.