Oh, the joys of home building work when you have small children. Apparently we are a week away from all of ours being finished. But it’s been happening for so long I can’t imagine it ever being over. Or ever getting rid of the dust. Oh, the dust… 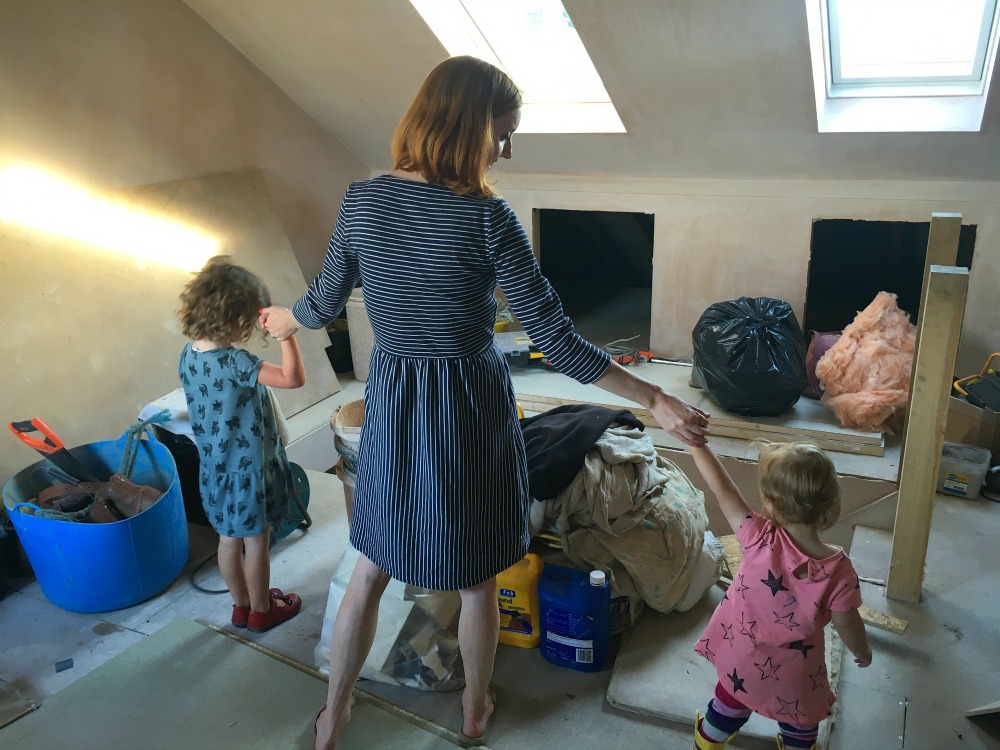 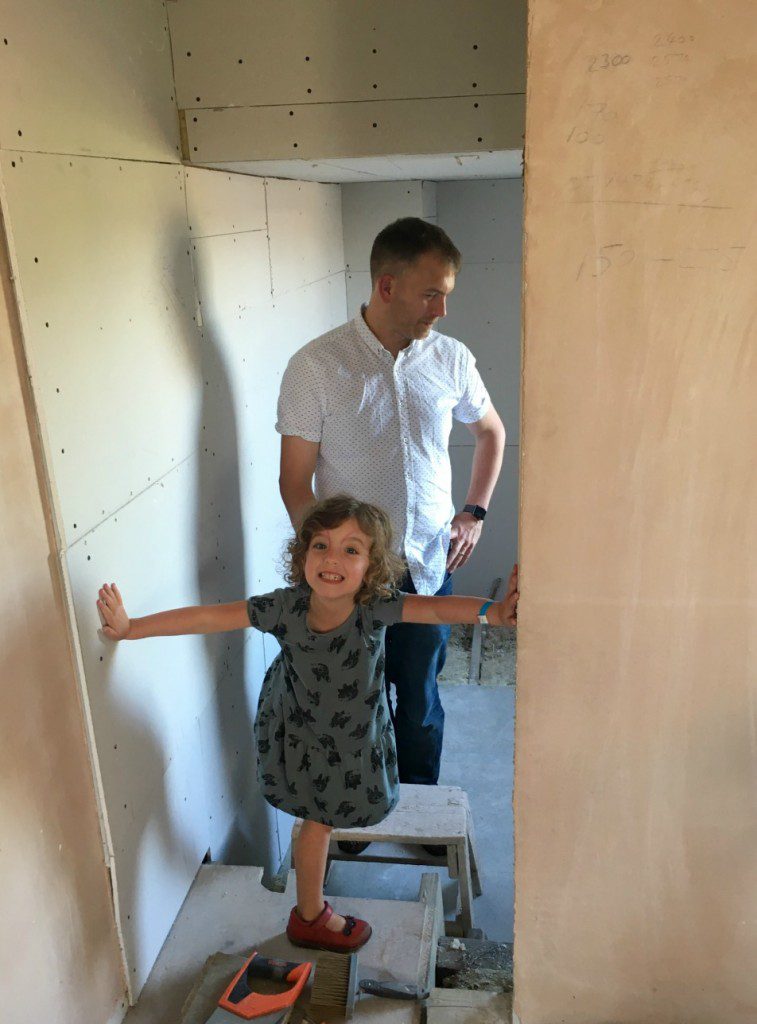 I’m clearly a true child of the 80s as I am, like most people I know of my era, obsessed with house prices and property. And property programmes, of course. We watch them all, from Grand Designs to Small Spaces to Homes Under the Hammer (a maternity leave guilty pleasure…tell me it’s not just me?)

And two and a half years ago we took Kirstie’s Location x 3 advice and went for the worst, most woodchip-covered house on the street. Before then the most extensive DIY work we’d done was painting followed by drinking wine, or calling a parent to come down from Sheffield to take us to IKEA, again (sorry, Gill and Keith).

So it’s fair to say it’s been a learning curve as steep as the stairs we had removed. Especially as home renovations with small children running around is a particular kind of project to manage. So two and a half years of building work in, here’s ten things Kirstie and Phil and Sarah Beany and George Clark and Kevin McCloud don’t tell you about the joys of building work when you add small children into the mix:

P.S. despite the fact we are never, ever moving again, ever, I still look at Rightmove, for fun. 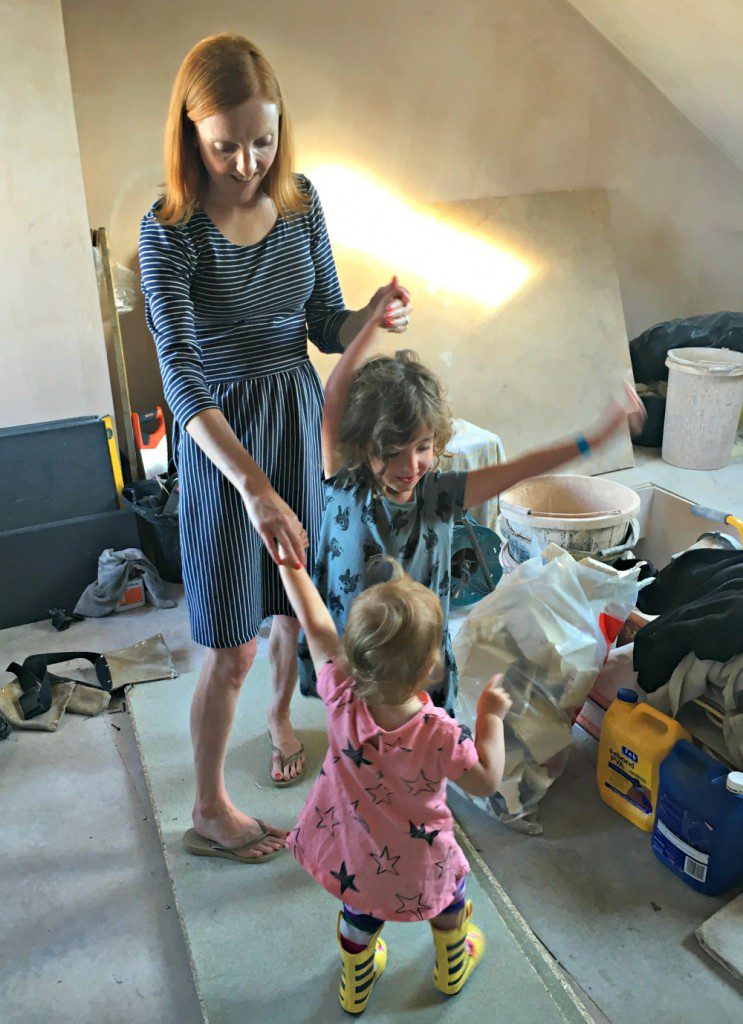 Someone really does always gets pregnant…One of the things Alex and I always joke about is the amount of people who are pregnant on house renovation shows, always at a really tricky time of the renovation. ‘New baby, new house!’ my mum said to me when we first moved in here. ‘Haha!’ I said. Oh wait…Pregnancy does have the advantage of giving you a very definite deadline. But it’s no fun being pregnant with no bathroom. Or no kitchen. And it makes nesting very difficult when your nest is feathered with dust sheets. But it’s great fun when one of your strange pregnancy cravings is wallpaper removal.

The children will be drawn magnetically towards DIY danger…If there’s a stray nail lying around, they will find it, 100% guaranteed. While lurching towards any kind of open hole in the wall, open paint can or the loft stairs with no banisters. Yikes. Thankfully they also get bored pretty quickly.

It turns your house into a giant version of Mouse Trap. You can’t go upstairs as they’re demolishing most of it. You can’t go out the back as it’s raining dust and nails and there’s the added excitement that a hammer might drop from three stories up. You can’t get out anyway as scaffolding’s blocking the door. You can’t get out of the front door with a pram as there are piles of stuff on the path. You can’t get to the kitchen as the future bathroom stuff is there. It’s like a very weird soft play. Or the Crystal Maze, if Richard O’ Brian was replaced by Bob the Builder.

There’s no-where to dry the washing. Probably the most boringly domesticated point ever made on this blog, but there you go. You can’t dry it in the loft as it’s being demolished. You can’t dry it outside because see above. And the scaffolding is blocking the line. Obviously during this is the time of sick children and loads and loads of sheets and towels.

Having a serious conversation with a tradesman? One of the following will happen: your child will urgently urgently want something non-urgent. Your child will attempt to pull one or both of your boobs out of your top. Unexpected nakedness from one or both children. Surprise!

Your toddler, who wakes up in the night if you so much as breathe, will now be lulled to sleep in the day by the bone-scratching sound of the circular saw and even sleep through a wall being demolished right next to their bedroom. Building work = the new white noise.

The dust, oh the dust! Everyone tells you about the dust to be fair. It really does gets everywhere and in everything. No-one tell you you’ll be bathing both children and bits of the ceiling will be falling down around you. Or that water will come through the lights.

You’ll lose everything in the overwhelming chaos. Like all components of the ballet uniform. Matching pyjamas. Matching shoes. Your mind, somewhere in the sea of dust. The children will inevitably get ill at the worst time (see: chicken pox x 2). There will always be a delivery 30 seconds into naptime.

It *is* fun for children. I remember my mum making us a makeshift swing on the roof struts when they built my childhood home. E’s new game is ‘let’s climb half way up the ladder while mummy’s back in turned’ It’s unexpected and new for them. You can also kill many hours watching scaffolding going up or metal beams being winched over the house.

But then you spend most of your time a) making tea for many people, when you remember b) wiping up dust, if you can find the wipes c) saying ‘Careful! Don’t touch that! Where did that hammer come from?’ If you’re a work from home parent, expect to get no work done due to chats with all the chatty tradesmen around. Where have all my mugs gone? When’s Location x 3 back on?

Dare I ask how the home schooling is going? 📚 G

Hey, how’s everyone doing? Such a weird time of

Do your children produce a lot of ‘art’? What

I just want to record the fact that, even if it ne

‘Twas the night before World Book Day and all th

The days are long but the years are short...isn’

Ad - Question...how do children acquire so much ST

Actual real life representation of how I feel, one