How To Travel In London With Children – Via Black Cab

Can You Take A Pram In A Black Cab?

We Look At Taxi Travel In London With Kids Via App

If you have a small baby and live in London, you might be wondering if you can take a pram in a black cab. We look at a good app for taxi travel in London with babies. 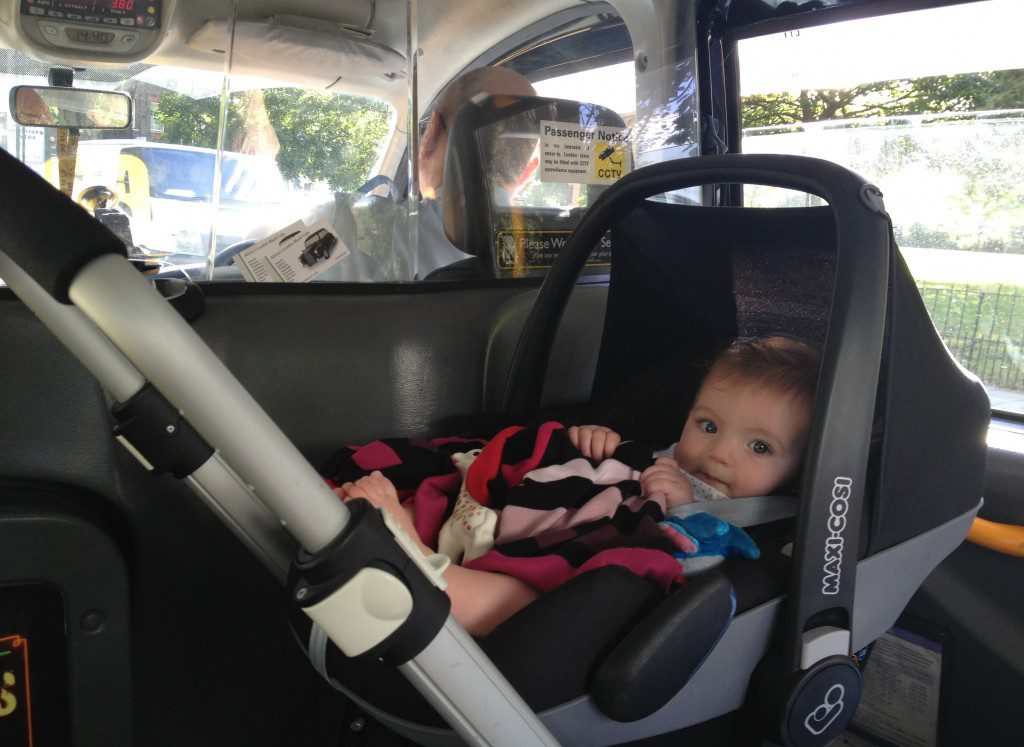 It’s an understatement to say that getting around London with very young children can be pretty tricky. Last year I wrote my tips to navigate public transport with a pram, and it seemed to chime a chord with a lot of parents who live in cities and don’t drive. Train stations are notorious for never having escalators or lifts, the tube is easily overcrowed, buses are often full or just don’t stop, everyone tuts and often no-one helps.

We were approached by Hailo to see how getting from A-Z with a B A B Y in a cab compares to using public transport. So without a car, could this be the answer to every parent’s city transportation woes?

Firstly, Can You Take A Pram In a Black Cab?

Yes, you can! You can take a pram in the back of a black cab, unfolded. So your child can sit in the pram for the journey.

They will need to be properly strapped in, and you’ll need to have the brakes on. Some black cabs will have additional straps to secure the pram.

Our Bugaboo Bee 5 fit in the back of black cabs pretty easily.

So what is Hailo?

Why Is Hailo Useful For Parents And Babies?

So how did we get on? Here are the journeys that we took:

After a weekend at my parent’s house, Alex came home on Sunday and Eliza and I got the train back the next day. From Clapham, it’s one train ride home. However, after a solo two hour journey with a restless toddler who refused to sit on the seat and shouted “boooobie!” at all the wrong, quiet moments, I just could not face another train ride, especially one that involved then carrying the pram and our massive bag up the steps at our local, lift-less station. I used the app to call a cab; it arrived within five minutes, the driver called us as soon as it was booked and then again once he arrived, and helped us in and out. We were at our front door in half an hour.

(An aside, one of the biggest mysteries of London life has to be – why are there NEVER any normal taxis at Clapham Junction aka the world’s busiest train station? We’ve always struggled when getting a taxi back from there).

We used Hailo to make our way to and from the station when we went on holiday recently. We had a suitcase, a giant bag, various other bags, and an Eliza in a pram. It would have been a nightmare on the train. The only time we encountered problems was on the way back at Clapham, where the app kept telling us there was a taxi in the area (there wasn’t). We had to wait about 15 minutes to book. but got one in the end.

OK this is a totally lazy one, and didn’t involve children in any way. I went out for dinner and drinks with my friend Gemma. I would normally get the bus back, but it was dark and raining and to be honest, I’d had some wine and I just couldn’t be bothered. I thought I’d see if there were any cabs in the area. There was one, so we were both home and dry really quickly.

Taxi Travel With Babies: What did we think?

It doesn’t take much common sense to work out that getting a taxi is a lot easier than getting the bus or train, especially with a pram and a baby or toddler. Of course it is. But on those opportunities where you need to take a cab, Hailo makes it even easier – you don’t have to faff about trying to hail a taxi in the street or having to call for one when you’re not too sure what the name of the road you’re on is. And you don’t have to pay with cash (as someone who never seems to have any, this is great).

The service does depend on there being taxis in the area – there aren’t often many driving around where we live, but we are quite far out in London terms so this is to be expected really – although saying that we did get lucky with the above journeys. The only real problem we had was our morning journey back from Clapham after our holiday we had to wait for about 15 minutes before there was one in the area. I imagine you wouldn’t have this problem in more central London, or at busier times though. And the service is growing as more taxi drivers join up.

If you have a small child, all the related paraphernalia, lots of luggage, are on your way somewhere, or at the end of a long journey, getting a cab is a lot easier than battling with public transport. And using Hailo makes it even easier. Sure, taxis are most expensive than the bus – that’s a given – but on certain occasions, anything that can make your life as a parent easier is a bonus. And Hailo does just that.

Thanks Hailo – we were provided with account vouchers to try out the service. However, we’re keeping our account open and definitely use it next time we need a cab.

Make Sure You Read These Posts: