Going on a cruise and looking for tips on taking children? 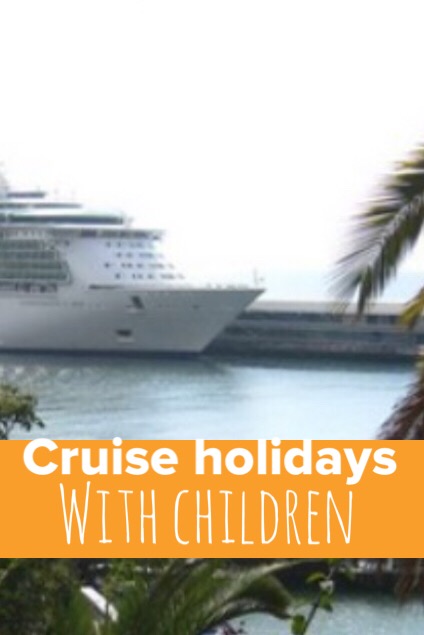 As I think I might have mentioned once or twice, we’re just back from our family holiday. We went with Royal Caribbean on the Independence of the Seas, for an 11 day cruise around the Canary Islands and Spain.

It is not the sort of holiday Alex and I would have considered pre-children, but my parents have been before and loved it – and wanted to take us all to celebrate their wedding anniversary. As a family holiday it makes a lot of sense as everyone gets to spend time together (and you can always get off the boat to spend some time apart!)

So is a cruise holiday suitable for children? Here’s some things you might want to know (and you can also read my tips on cruise holidays for parents)

Children’s facilities: as I said here there’s a whole load of things to do on the ship for people of all ages, from swimming pools to an ice rink to a climbing wall. There’s also a huge dedicated children’s area; facilities range from the nursery for younger children, through to several different kids clubs (there’s a disco area for teenagers, and they even can have DJ training in the nightclub). You do have to pay for the nursery – we didn’t use this, but there is a children’s play room that’s free to use, and there’s no charge for the older kids clubs. Royal Caribbean have a deal with Fisher Price, and all the children’s areas are decked out accordingly; there’s lots of toys and they’re all new. Basically, there’s an awful lot for children to do without even getting off the ship. Eliza had the most amazing time ever.

On a practical note, high-chairs and booster seats are available in all the eating areas. You can buy nappies and wipes in the shop (but not swim nappies, so take them with you). 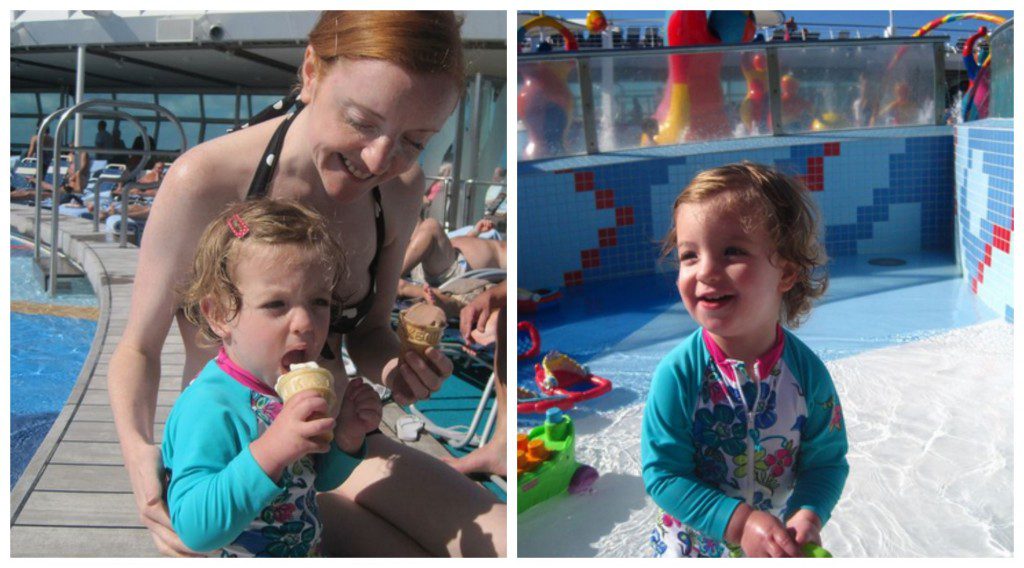 Swimming: There were plenty of swimming pools and jacuzzis on board. In addition,  there’s also the children’s H20 zone with water fountains, and a dedicated baby splash area. As it’s an American ship it follows American rules, so children are only allowed in the pools if they are toilet trained, even wearing swim nappies (but on the days the ship is docked no-one really notices if they’re in the wrong bit of the water zone, *ahem*) 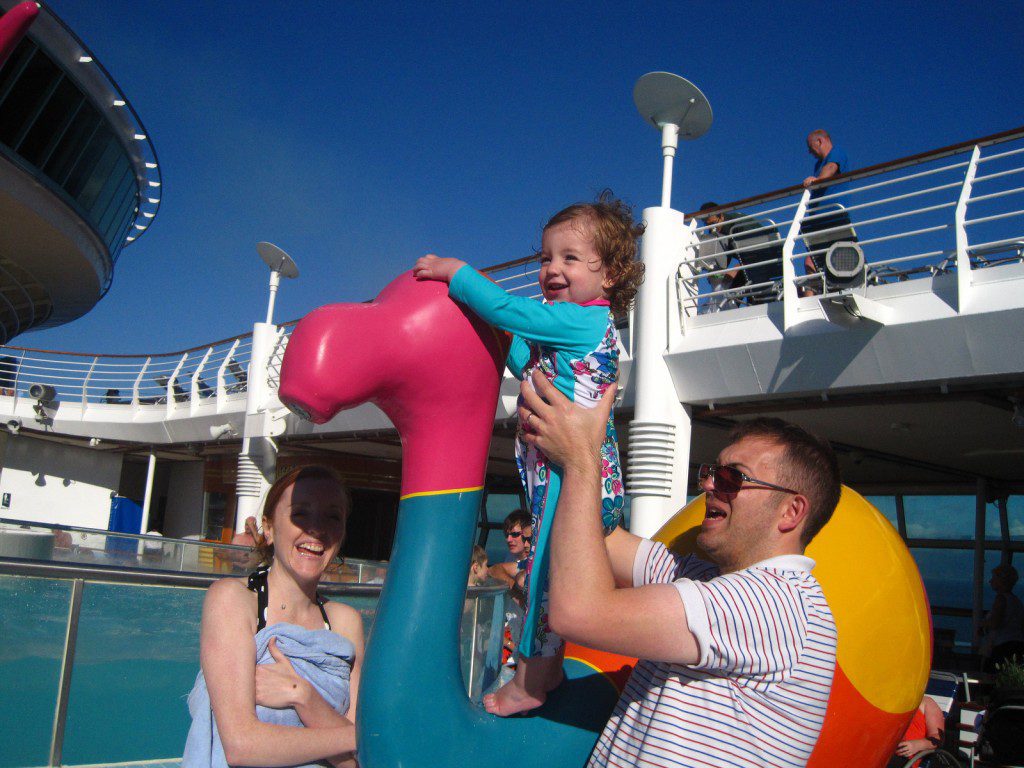 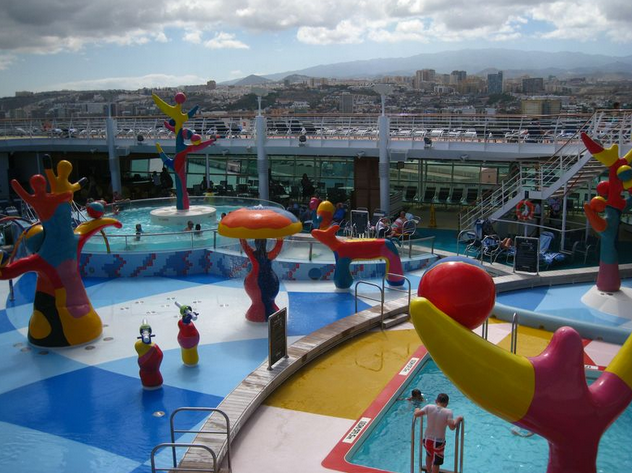 Food…there were two main options – the buffet-style Windjammer Cafe, which is open for most of the day, and the formal dining room. The cafe is huge and has an ongoing supply of most sorts of food, so it’s very easy to find something children will want to eat. There’s also a lot of cake in the afternoon. The formal dining room has a big children’s menu, with lots of healthy options (and chips, of course). The food was SO good – I miss it!

There’s a free supply of frozen yoghurt outside, by the swimming pools. It’s probably best not to allow your children to have one of these early on, or they will pester you for one every day for most of the holiday.

There were also several extra restaurants you have to pay for; RC kindly gave us a free meal at the American diner-style Johnny Rockets, which was brilliant fun, especially for Eliza. It’s definitely worth going if you have children.

…and drink: you have to pay extra for alcohol, but there’s lots of lovely poolside bars to drink it in.

Sleeping: we were incredibly lucky that our room was upgraded to one with a balcony, which had a huge double bed and then a sofa area. We were given a travel cot to put in our room for Eliza. This did take up a lot of the room, but we were still able to sit out and have drinks on our balcony or watch TV on the bed without disturbing her.

Safety: as a typically neurotic mum I was ever-so-slightly worried about Eliza going overboard. But all the rails are all quite high, and we were with her at all times anyway. 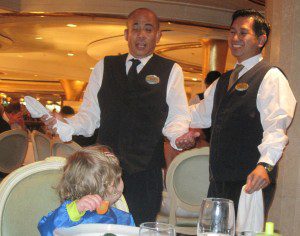 The ship’s staff: all unbelievably lovely and made such a fuss of all the children. I know it’s their job to be happy and professional, but they all really are (everyone says hello and hi-fives your little people). Our waiters in the dining room especially were fantastic with her, sang at her and gave her two puddings most nights.

Here are Eliza’s favourite things about the cruise:

And finally, here’s some of our tips for taking children on cruise holidays:

This was an extended-family holiday completely independent of anything else. Royal Caribbean actually got in touch a few weeks before we left to offer me a press trip cruise, which we had to turn down due to the timing of the one we were already due to take with them. However, the RC press team arranged lovely things for us for this trip, including a room upgrade, Wi-Fi and a free meal. So thank you!