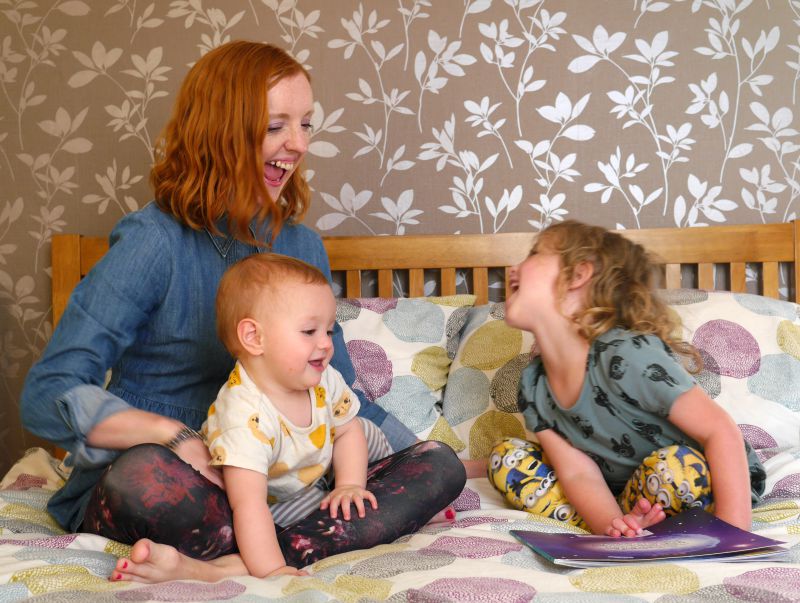 Buy the biggest bed you can: the secrets of co-sleeping parents

Are you a co-sleeper? Did you ever co-sleep with your children? Or is the thought of bed sharing with your baby, toddler or child a complete nightmare to you?

The thought of co-sleeping used to terrify me, ‘I’ll NEVER let my baby sleep in our bed’, pregnant-me thought as I starfished in it, smugly.

Even our very sensible and pragmatic NCT teacher drilled us in safe sleep guidelines and told us how to co-sleep safely, as she was sure we’d have the baby in with us at some point. However, I still thought it was *sharp intake of breath* a massive no-no.

And then I actually had children.

We didn’t co-sleep when our children were babies, and for the most part Florence slept in her snuzpod bedside cot next to me. But as time went on she definitely WASN’T sleeping through, still, thanks so much for asking. The ongoing sleep deprivation struck, hard, and we were still breastfeeding a lot at night and generally up all night. So in a bit to get a bit more sleep, she kind of accidentally ended up coming in with us in our bed. And never really left.

Even now, four years on, you can usually find a combination of all four of us in there. Most mornings.

Because like breastfeeding, extended breastfeeding and babywearing, co-sleeping is one of those types of attachment parenting techniques that seen all 70s earth mothery and for other people, the 70s earth mothery types, but are the type of thing you might end up doing, probably accidentally, for the simple reason that these things work, for your family.

There are many sleep benefits of (safe) bedsharing and it’s something that a lot of people do, either openly or on the quiet. So why shroud it in secrecy and shame?

So in a bid to bring it out into the open more, here are the sleep secrets of the not-so-secret co-sleepers, aka us:

You need to buy the biggest bed possible: For YOU. As you’ll all probably end up sleeping in it, together, at some point. And you might as well be comfortable, right? I still regret bitterly that we didn’t get the legendary snug of co-sleepers, the Super King (we only had space for a King, which is better than a double, but still…all that space we could have had…).

But however big your bed, you’ll still end up on the edge: Clinging to the edge of the mattress, covered by a tiny scrap of duvet. While your child starfishes sweetly somewhere in the middle, their foot nestled in your face. Bringing new meaning to the term ‘baby yoga.’

Everyone gets more sleep when you co-sleep: Feet in the face, wriggling toddlers, everyone fighting for space, how do you get more sleep?! Well, I have two small children who are wide awake and want to watch YouTube at 5am, I’m tired. But the very thought of getting out of my lovely warm bed in the very small hours, scooping up my newly wakened four-year-old, wedging both of us uncomfortably into her small-sized bed, staying until she falls asleep and I inevitably do too, waking up with a bad back and neck and a permanently bad mood, is exhausting. Despite wriggling children, you get into a co-sleeping rhythm – which means my bed is way more comfortable for us all. Although we’re all night weaned, co-sleeping also helps with breastfeeding, as you and your boobs are right there, with no need to take them anywhere else.

You’re probably not having that much sex with your partner, then, anyway: Ah, that old chestnut – how can you have sex if there’s a child in your bed? Well, you just need to think outside the box / bedroom. And at first you’re probably still smarting from the stitches and lactating whenever anyone looks in your direction, or later on so exhausted from toddlerdom that you can’t keep your eyes open anyway, so sex binges might not be the first thing on your mind (or they might be!)

You might need to modify your bedtime TV binge: Probably not the best time for Breaking Bad. Or any kind of tense, peril-filled thrillers (due to ongoing winter sickness season, both of mine are now accidentally aware that ‘Jim from The Office’ is married to Mary Poppins).

Don’t get too precious about your bed linen: Your duvet cover will probably bear the brunt of all the germs / bug / leaks / spills. Get one that washes well, it will be washed a lot.

Most people will probably co-sleep, either openly or secretly: While ‘co-sleeping’ might be a loaded term, I bet if if you asked most parents if their child ever slept in their bed, then they would say yes. I was pleased to see the Lullaby Trust update its advice on co-sleeping this week. Co-sleeping happens, and parents need to know how to do it safely and that it’s OK to talk about it. The big secret is it shouldn’t be a secret. As parents we should be able to make educated and informed decisions about what works best for our families.

And finally, the biggest secret about co-sleeping? It’s absolutely delicious: A big misconception about co-sleeping is that it’s something you have to grit your teeth about, and endure. But the biggest benefit is that there’s nothing lovelier than snuggling with your lovely warm child. Especially when it’s freezing. Or waking up to them, which is wonderful. Even if they do demand the iPad at 5am.

These photos are from a post I wrote in 2015…how young do we all look?! More posts…the politics of Paw Patrol, why you shouldn’t cherish every summer and the very busy smear test