A very royal Baby on Board – but would you wear the badge?

Watching the news last night, the pregnant Duchess of Cambridge was visiting Baker Street underground station to help celebrate the 150th anniversary of the tube. A TFL official gave her a Baby on Board badge, resulting in much hilarity all round, as well as confusion from Prince Philip.

If you’re not already familiar with them, the Baby on Board badges are given out to pregnant women to wear on London’s public transport, to let people know you’d like a seat. The badges were the inspiration for the name of this blog – for the obvious connection – but despite my daily commute to and from Soho until I was eight months pregnant, I never actually got one for myself.

This was for a couple of reasons really; my route to work meant I almost always got a seat, and when I finally started to look pregnant, people would mostly offer. And used to the faceless anonymity of the tube, I thought it would make me feel ever-so-slightly self-aware.

However, there were many occasions where I had to stand for ages, as people either didn’t notice my bump, or pretended they hadn’t. Should I have been less stubborn and just worn one?

Here’s what some mums had to say on the matter:

Tamara, Gingernut Fox – I did wear one, after about 5 months people generally ignored it though – I was standing at 36 weeks. My worst two stories: the man who pushed in front of me to get the last seat realised I was heavily pregnant and then pretended to be asleep all the way and the delightful two young ladies who shouted at me and told me they hated people who thought a badge entitled them to a seat and that they wanted to sit down…I see shocking behaviour everyday of women with badges displayed and being totally ignored

Emilie, @mrsramskillI had one and LOVED wearing it! Still have it now…I was quite sorry when I had to stop wearing it – people were kinder to me when I had it on…

Natasha, @foodqueenI put it on just before got on tube to help get a seat…although I wore it, on so many occasions people looked up at me, clocked the badge and looked down again at their paper!

Rachel, The Little Pip – No, but we only moved back & used the tube from 32 weeks onwards when was pretty clear. Wouldn’t have had one I don’t think though…

Alice, More than Toast and MamaUK– I had one but only wore it once or twice! It made me feel self conscious

Emma, Born in 2001 – We lived in London when I was pregnant and I wanted one but never did get one! I couldn’t quite bring myself to it! 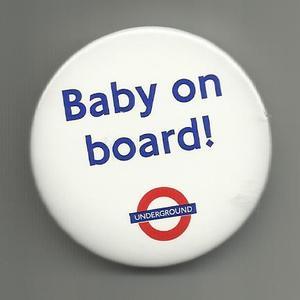 Obviously Kate’s badge was all for the photocall as she never has to take the tube, but what do you think?

P.S – I love this Daily Mash article – Kate STILL explaining the badge to The Queen and Prince Phillip.