The VTech phone is a wi-fi-enabled tablet that comes with a web browser, camera, multimedia functions and apps  – all in one parent and child-friendly package.

So how did we get on? 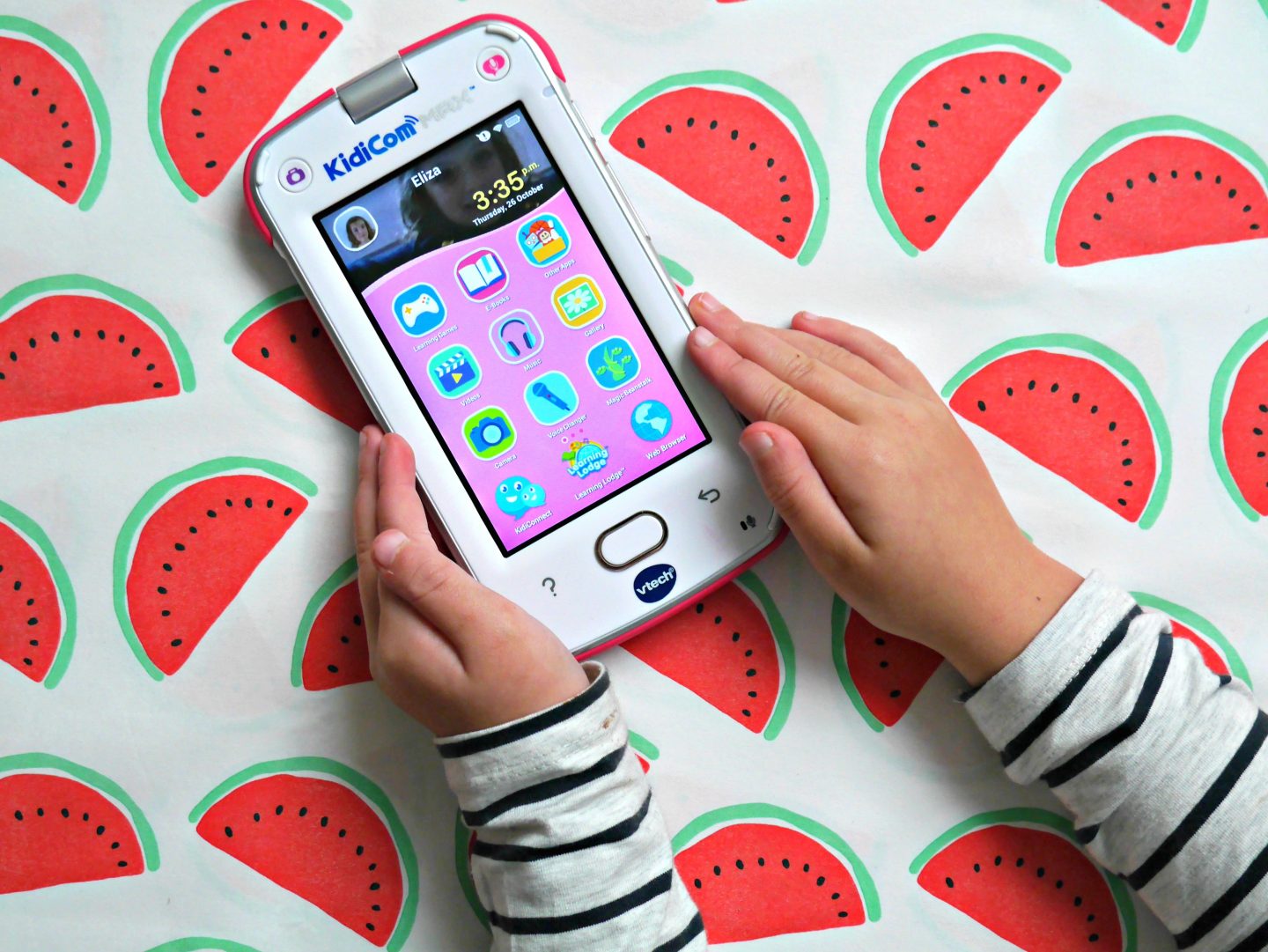 What Is The VTech Kids Phone?

The VTech KidiCare Max is essentially a simple Android tablet with an interface designed for children that has strong parental controls. There’s also a messaging app that lets children chat with pre-approved contacts who have the app on their smartphone.

As we are a very tech-friendly house with a couple of different tablets among us, we were interested to see what it was like and how it compares to other child-focused tablets we’ve tried out.

Firstly, we went along to the KidiCom Max launch party… 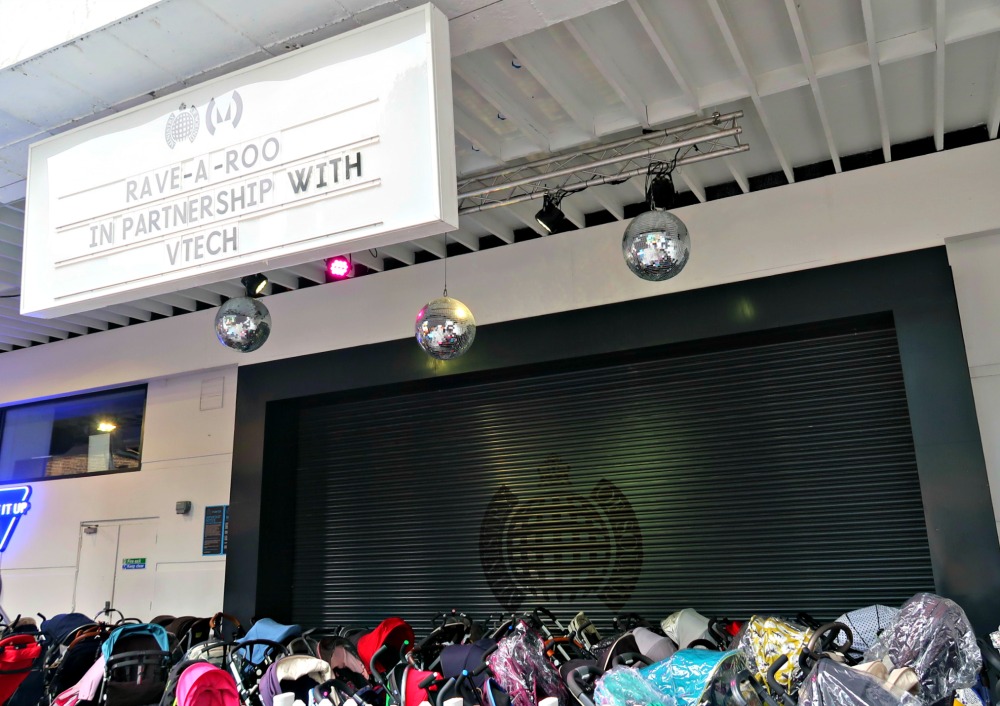 The KidiCom Max launch was at Rave-a-Roo at the Ministry of Sound. Rave-A-Roo is a music and dance party for children and is one of those events that brilliantly balances entertaining children (with music, dancing, soft play, tattoos and crafts) along with keeping adults happy, too (with classic rave / party / dance music and a prosecco bar). 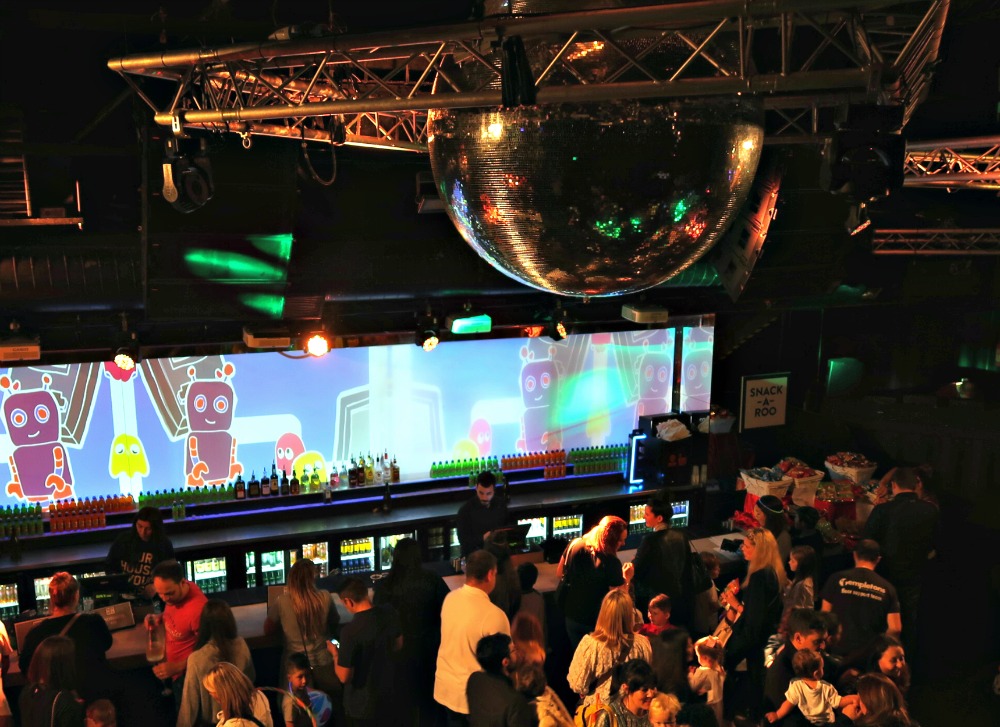 There are many ways that London changes when you’re a parent, but both me and Alex worked out we’d somehow avoided the Ministry of Sound in our youthful days of freedom in the city, so it was funny that the first time we went was with our three and five-year-olds. 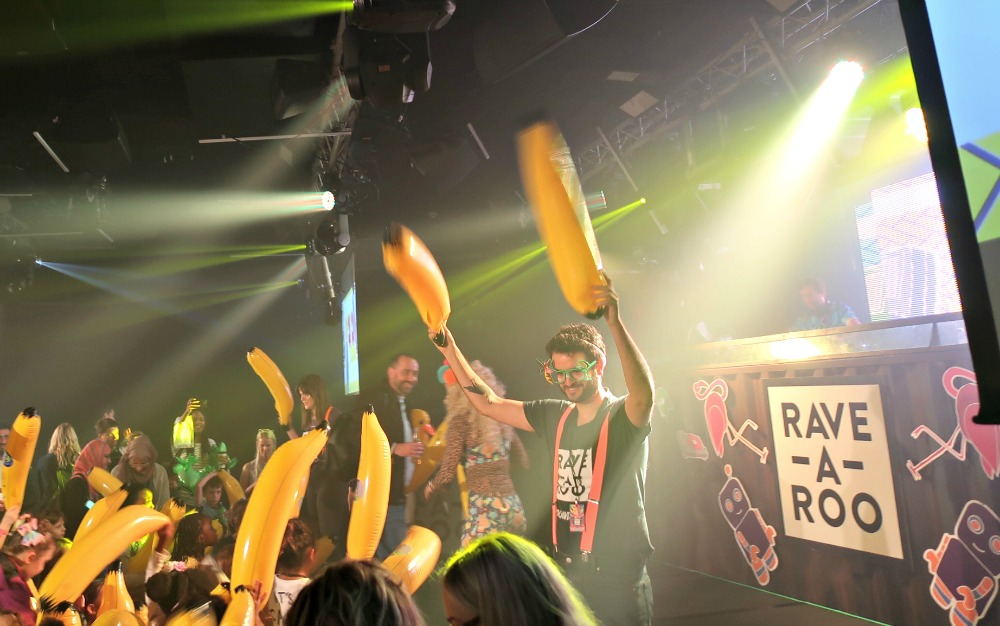 There was music, there was dancing, there was glitter and inflatables, there was soft play and crafting, there were a lot of children and parents and noise. It was, predictably, chaos.

We got tattoos, danced along to Shaun the Sheep DJ and threw some inflatable bananas around, but when it all got a bit too much we retreated to the VIP area to check out the KidCom Max. 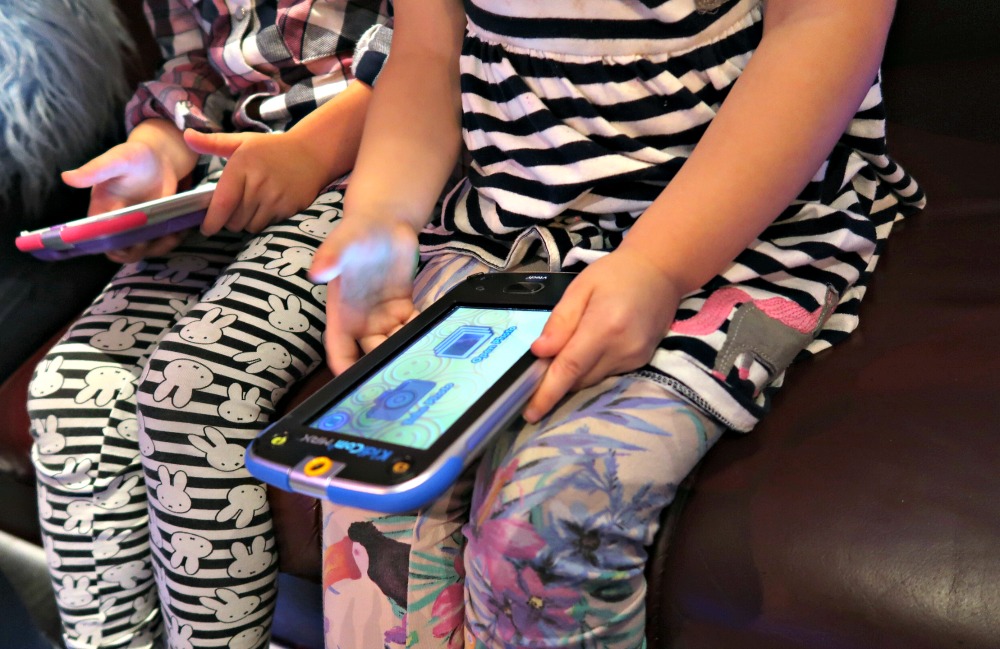 VTech assistants were on hand to demonstrate how to use the KidiCom Max and both children had a go. While Florence had most fun playing around with the buttons and camera, Eliza tried out lots of the features, including the games.

Initial thoughts on the KidiCom Max; what’s in the box?

A few weeks later we were sent our own VTech KidiCom Max which we’ve been trying out ever since. 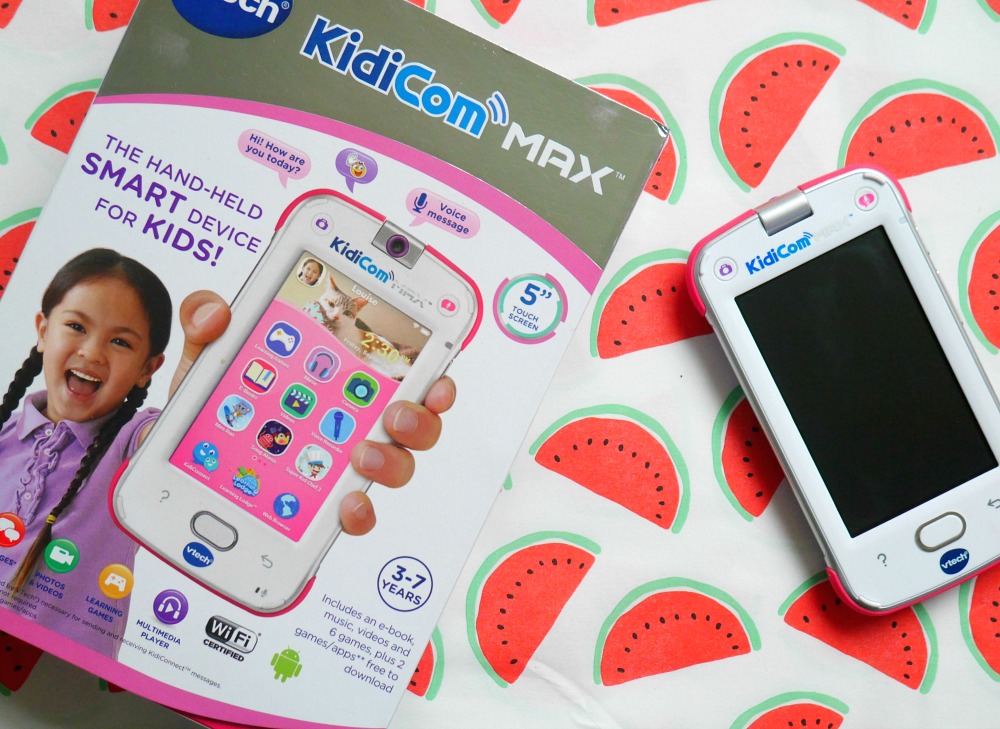 First impressions were good; it looks very much like a cross between a smartphone and a small tablet. This is great as children aren’t fooled by fake designs, as every parent has found out when their child wants to play with their phone and not the fake plastic smartphone from the toyshop.

The tablet has a plastic bumper and a 5 inch touchscreen that’s also shatter-proof, which is a very handy design feature. Related; I’m still mourning the loss of my less-safe iPad Mini, which met a sad and splintery end when it was dropped on a concrete floor.

What Age Is The VTech Phone For Kids Suitable For?

The KidiCom Max is suitable for ages 3-7 and it’s available in two colours – white and pink / purple, and black and blue – which seem unnecessarily gendered to me, more on these later. 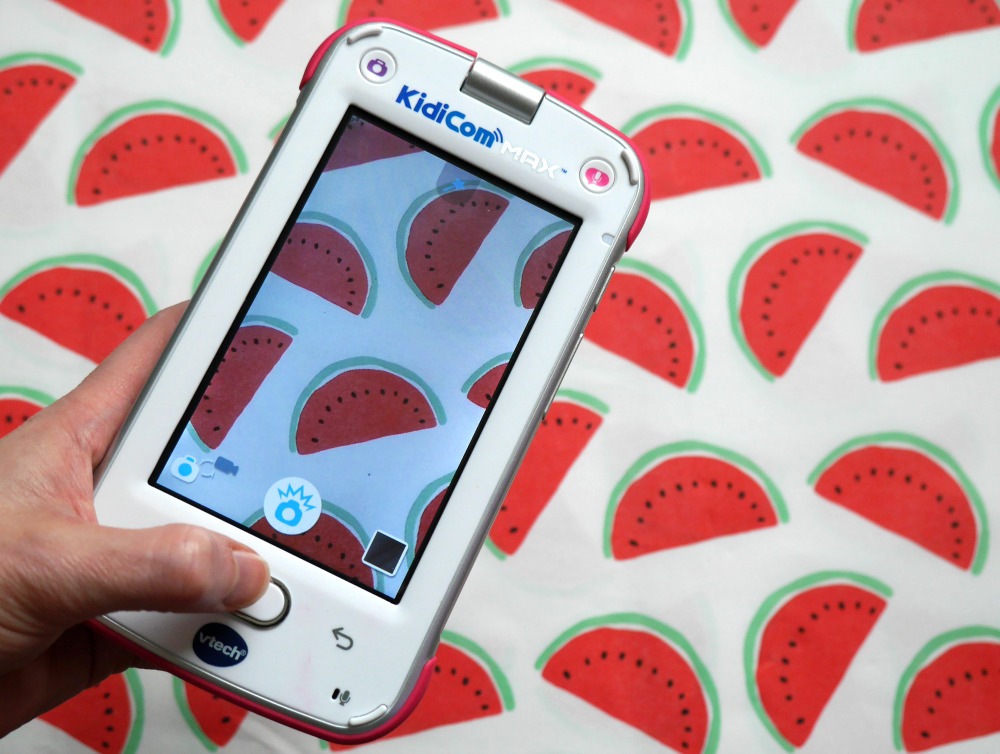 There’s also an external camera which you can flip from front facing to back facing, a feature I thought was simple and clever.

So what’s included with the VTech KidiCom Max?

What did we like about the VTech KidiCom Max Phone? 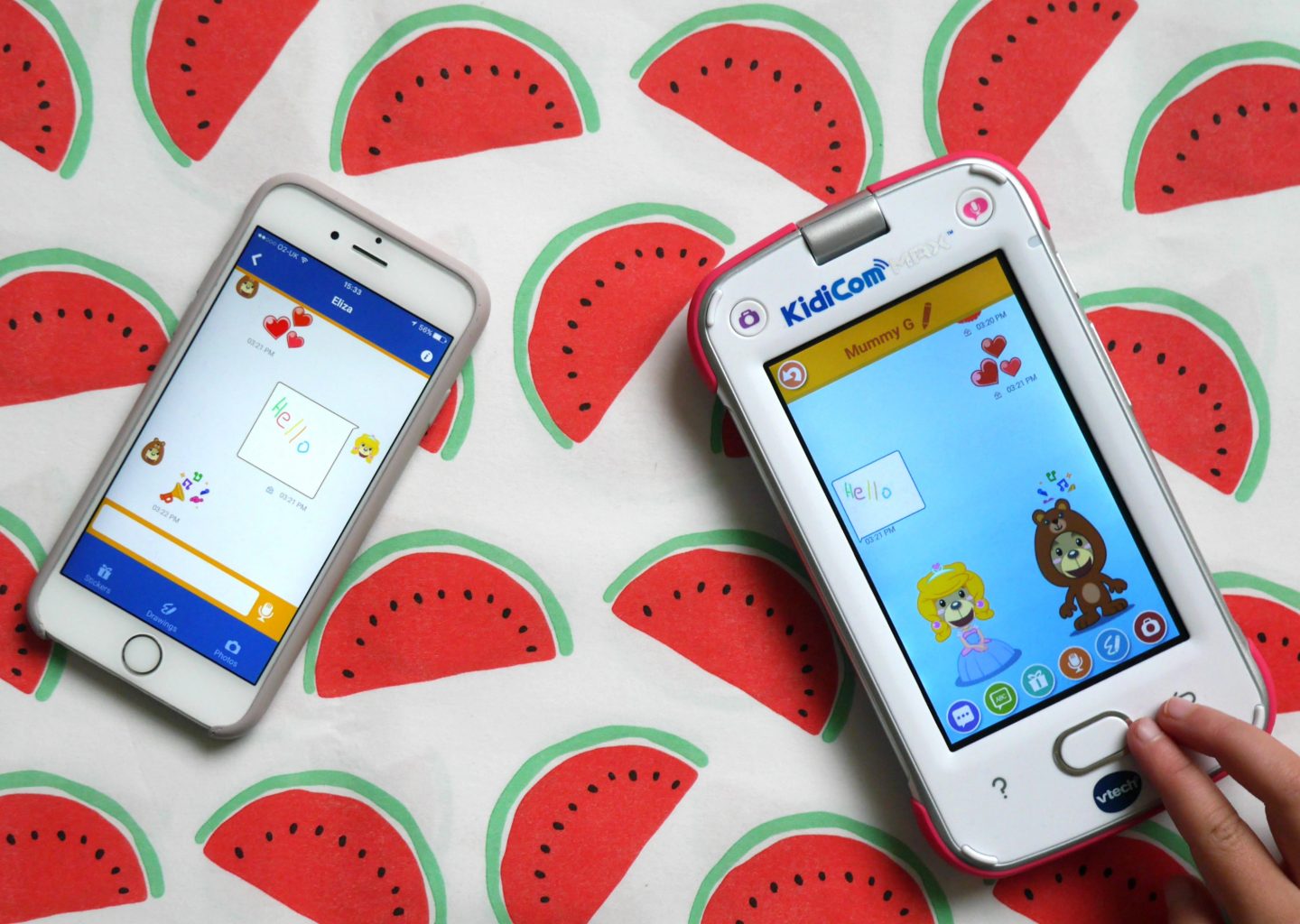 The messaging app is a good idea – you can use the KidiCom Max to speak to approved contacts who have the app on their own phone. You can message individuals or groups, and also send photos, pictures and voice messages. For us at the moment it’s a fun thing to do in the house or when Alex is at work.

My two are far too young for us to even consider them having a phone yet (not till they’re 21, of course) but I can see how this would placate older children who are keener than their parents on the idea of them having one. It isn’t the easiest to set up though and we have found group messaging to be slow.

And what wasn’t so great about the VTech Kids phone?

During our KidiCom Max review we found that some of the apps are really pricey, for example there’s a Trolls app that costs £19.99 and was advertisied on the front page of the app store. Although lots of the games and apps cost around £2.99, it seems like this could add up quickly, especially considering the amount of brilliant free content for kids that’s out there, like the CBeebies apps or Toca Boca games.

The KidiCom Max comes in two designs, with either white / pink / purple or black / blue. In the customisable settings, the typically pink, girly designs are mocked up for ‘Louise’ and the blue designs for ‘Aiden.’ This did seem very gender stereotypical; I know you could buy these for either boys or girls, but then why pick these colours?

You can also only set up one profile at a time, which isn’t the best for siblings, especially when they are at different ages and have varying likes.

The parental control is almost too restrictive – one thing E likes on her Amazon Fire is browsing the children’s app store and picking her own games. It almost seems too fenced in and I’m not sure how long it would retain older children’s interests.

So what’s the verdict on the Vtech kids’ phone? 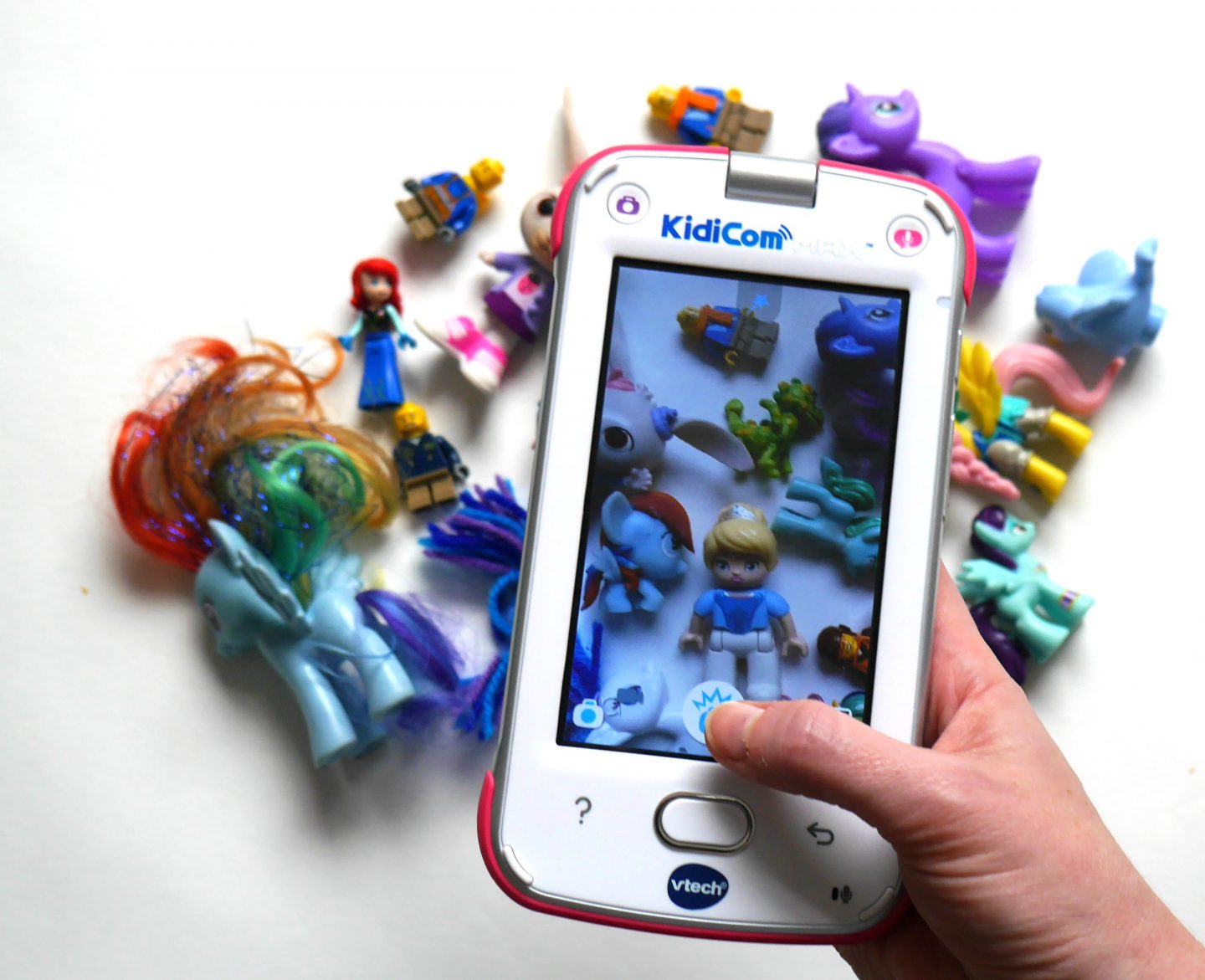 How Much Does The VTech KidiCom Phone Cost?

Retailing at around £80, the VTech KidiCom Max is slightly more expensive than other children’s tablets on the market (particularly the Amazon Fire), but less than an iPad. It’s a great design and it’s fun and easy to use, with lots of well-thought-out features.

There’s also peace of mind for parents; you don’t have to worry about anyone stumbling on a site you wouldn’t be happy with and you can also set usage limits for as little or long as you like. If children are used to the earlier VTech electronic toys, it would be a good starter tablet as it’s so child-friendly and easy to use.

More information on the KidiCom Max is here. We were sent the tablet for our VTech KidiCom Max review and tickets for Rave a Roo, and compensated for our time.