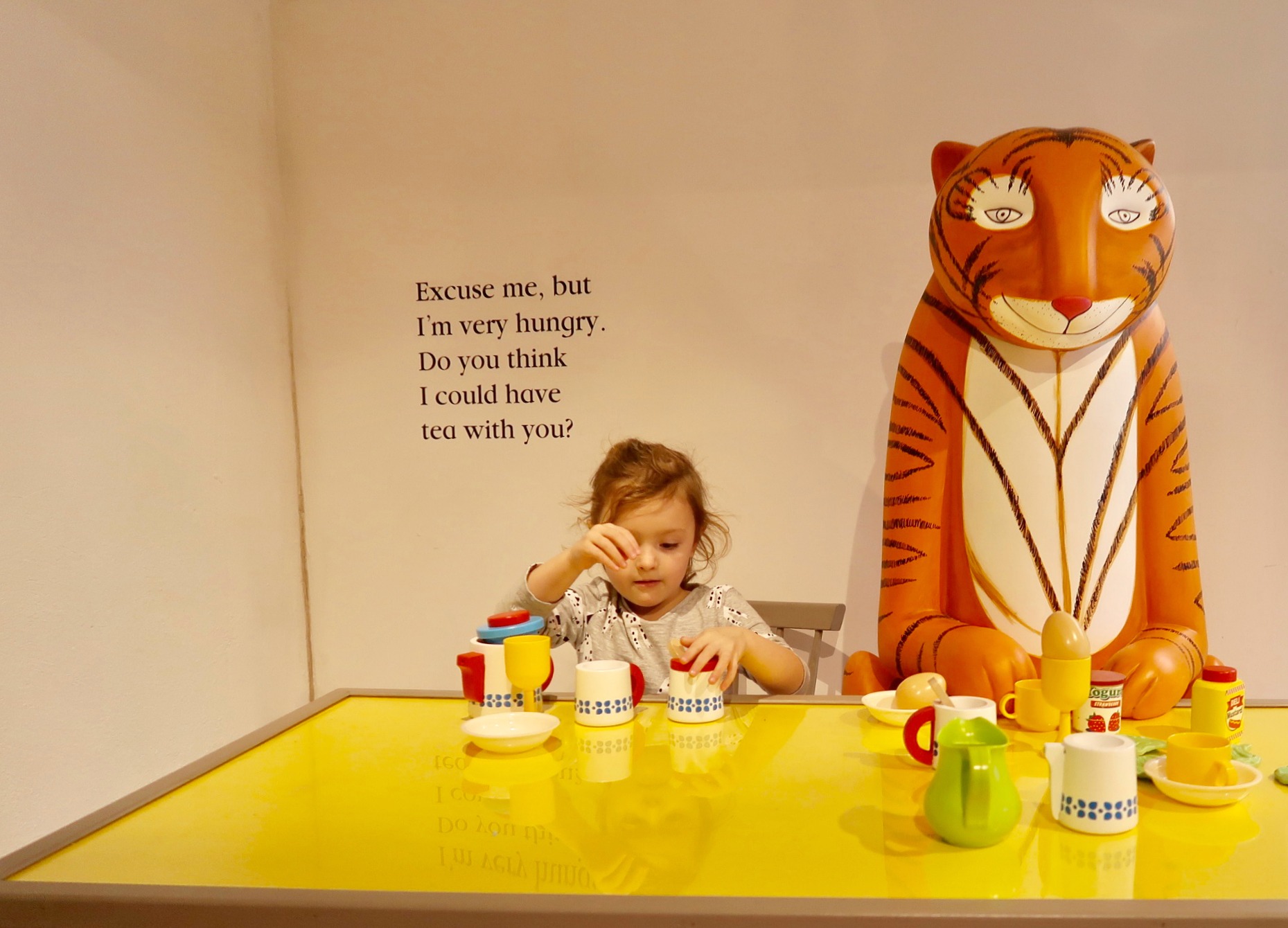 Tea with the Tiger at the Discover Children’s Story Centre

We were invited along to the preview of The Tiger Who Came to Tea and the adventures of Mog, the new exhibition at the Discover Children’s Story Centre in Stratford. Here’s what we thought:

Have you heard the one about the Tiger who came to tea? He ate all the food in the cupboard, drank all the water in the tap and OF COURSE you’ve heard that because if you’ve read that book once you’ve read it a million times. It’s everyone’s favourite bedtime book for good reasons.

That’s why The Tiger Who Came to Tea and another children’s classic character by author Judith Kerr, Mog, are the subject of the new exhibition at the Discover Children’s Story Centre in London.

The new exhibition starts with an interactive story-telling of The Tiger Who Came to Tea – complete with the Tiger, the tea and a giant tin of TIGER FOOD (what else?).

The doors are then opened to Judith Kerr world – a big room set up as lots of different smaller world, scenes and play areas themed around the Mog and Tiger stories.

There’s a greengrocers, there’s a bus you can drive, a post office where you can write and send postcards. There’s an cat basket you can sit it, a slide you can ride, and lots of Judith Kerr books you can read (or have read to you).

Dotted around are costumes, characters – spot the crocodile under the bed – and as much play food that you could possibly want to throw all over the floor. Children are free to run around and nothing is off limits.

You can even sit with the Tiger and play with all the food in Sophie’s kitchen.

Also, can we talk about the Tiger-themed tea?! We were given a special tea party – with tiger-striped cake and even blue jelly – which is available in the cafe for visitors (it’s all vegetarian and vegan friendly, too).

As an aside, as lazy south Londoners we’ve never ventured up to the Discover Children’s Story Centre, which was obviously silly as it’s worth the trip. It’s a magical place, and the outdoor play area is brilliant.

It’s suitable for children aged up to around eight, and adults of all ages. And unlike the Tiger, we’ll be back.

We were invited along to the press preview of the event and given tickets and tea. The Tiger Who Came to Tea and the Adventures of Mog exhibition is on at the Discover Children’s Story Centre in Stratford until September, more details here. Tickets cost £7.50 and include admission to the entire centre. Make sure you book in advance as it’s really popular…more things to do in London – the London Transport Museum and the Cutty Sark...also how London changes when you’re a parent