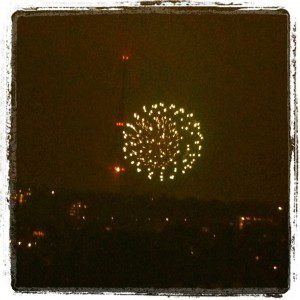 I’m trying not to speak too soon as there’s still one day left of it, but it’s been a very uneventful couple of days so far, especially after the past few weeks. I went back to work and then just did completely  normal things like going out to dinner with friends, shopping, and lying on the sofa and watching terribly trashy TV. Also, watching fireworks; it’s a really good time of year to live on a hill overlooking London.

Alex and I started NCT classes; more about those later, but everyone lives in our area (I was slightly worried they wouldn’t, as we have to go down the road to Dulwich for them as the Crystal Palace ones are only on Friday afternoons). All the people there seemed lovely, and we all had the same sort of baby-related concerns and questions. And next week we get to look at…photos of a placenta.

I saw the midwife again; all was fine and the baby did the usual trick of trying to kick off the foetal monitor. The midwife also told me about the parenting classes they run at the surgery which I’ll probably go to in January, and she told me about coming in for the ‘birth chat’ at 36 weeks when they discuss everything that’s going to happen in labour. 36 weeks isn’t that far away, and I’m sure it’ll go really quickly – especially with Christmas in the middle.

This week I also started to look really pregnant; I woke up on Thursday and my bump

just seemed a lot…bigger. For ages I’ve had people comment about how small I am, so it was an interesting change of events to have people say about how pregnant I’m starting to look. Thanks to my mum though, who texted me say ‘you’re not really fat until you don’t fit into maternity clothes, so don’t worry.’

Next week we’ll get to see for ourselves how big the baby is, as we have the 28 week growth scan. At Kings you get three scans as standard (12 weeks, 22 weeks, and then one after 30 weeks). However I’m also having additional growth scans due to my thyroid condition – which can mean babies are smaller – although everything’s been spot on at the previous scans and my bump is measuring normally according to the midwife.

As well as the scan I also have appointments at the pregnancy clinic (about my thyroid) and the haematology clinic (and my blood). And it’s six weeks until my maternity leave starts…