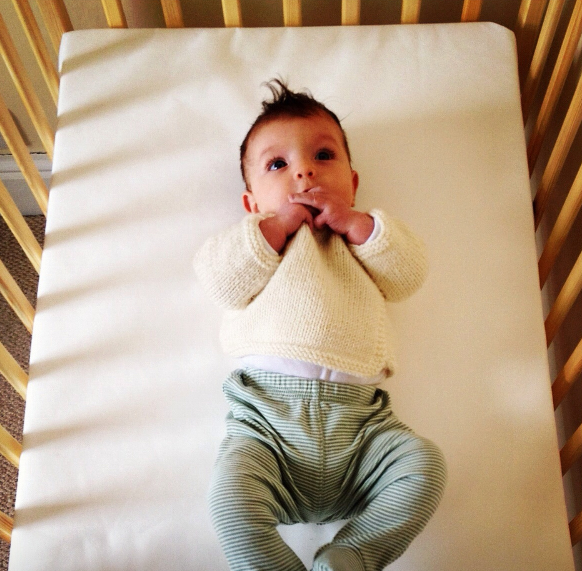 “My baby won’t sleep in the Moses basket…help!” I remember saying to the midwife when she visited the house, about 12 hours after our return from hospital.

She gave me a sympathetic but knowing look, before saying “Yes…that’s perfectly normal.”

In my just delivered, highly hormonal and not-slept state I was stunned. Did this mean there wasn’t an easy answer that we’d missed?

Newborn Eliza slept fine in the clear crib at hospital, and we just assumed it would be the same at home. But no, every time we put her in the Moses basket she’d wake up or wail and wail. She would only sleep on us. We were flummoxed.

Although we’d been told how to co-sleep safely by out NCT teacher, I was terrified of squashing her. So instead in the early baby days we took it in turns to sit up with her asleep on us in the night. I dreaded the nights and feeling so isolated. And we were both exhausted.

In the end, it was just perseverance that got her sleeping in the moses basket. We tried everything; t-shirts that smelled like me, muslins with breast milk on, swaddling, and so on. It makes me smile to think of this know, knowing lots more about babies and keeping them close (and to be honest, she was never a massive fan of the Moses basket and didn’t really like her cot either).

I’ve been thinking a lot about what we’d do differently second-time-round, and the answer, despite this tiring story, is not a lot. Not because we were perfect parents – far from it – but because everything we did ended up being instinct based. If she cried, we picked her up. We held her for hours. She slept on us. She napped on us. All the things that you’re not ‘supposed’ to do, but we did them anyway. Even if they were exhausting. It was what was right for us, at the time.

But the sleep thing is one thing I’d like to change this time, as I want the baby to be as close to me as possible, especially as we’re planning on breastfeeding again. And with a toddler who spends most of her time in our bed (fears of squashing her went out of the window at some point) who likes to get up and play at 6.30AM, I will do anything to make sure we all get a bit more sleep.

I had vaguely heard of bedside cots, but in my sleep-addled state last time I didn’t know if it would be exactly the same as the Moses basket, which was right by our bed. Later on, I featured the SnuzPod from Little Green Sheep on TalkMum and thought it sounded perfect. It’s a 3-in-1 bedside crib that attaches to the side of your bed, and you can have the side down meaning you’re right next to your own baby but still in your own space. I love that it’s safe and has the benefits of close sleep, but within your own spaces. And doesn’t it look really lovely too? It also looks great for breastfeeding, which you do a lot of with a newborn.

So I’m pretty thrilled that we’ll be reviewing it when the new baby arrives. I’ll be posting it properly in a few months time, but tweeting about it too in the meantime. Fingers crossed for more sleep, though. Wish us luck! And did you try a bedside crib?