Can you really take children to a Gordon Ramsay restaurant? 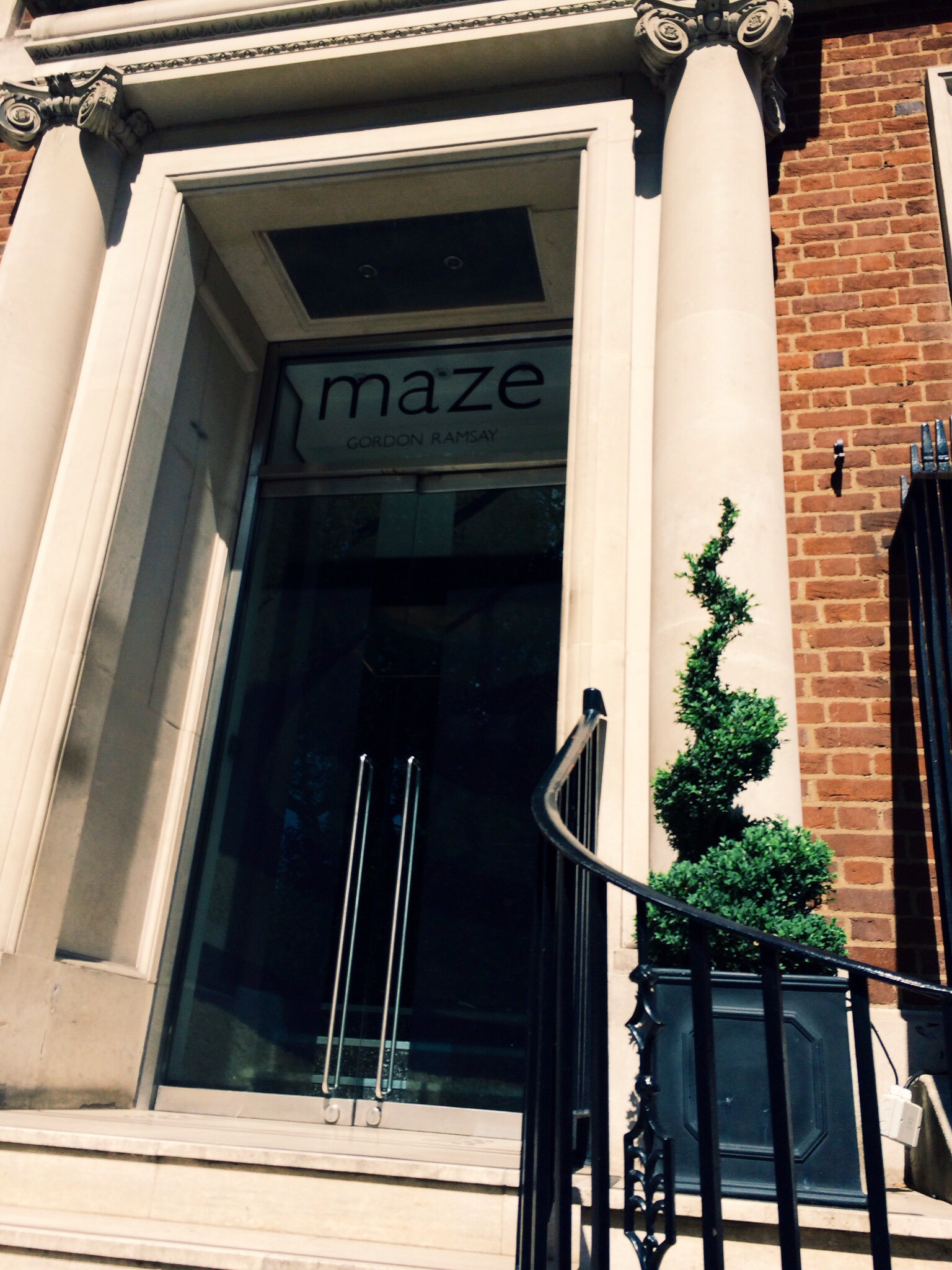 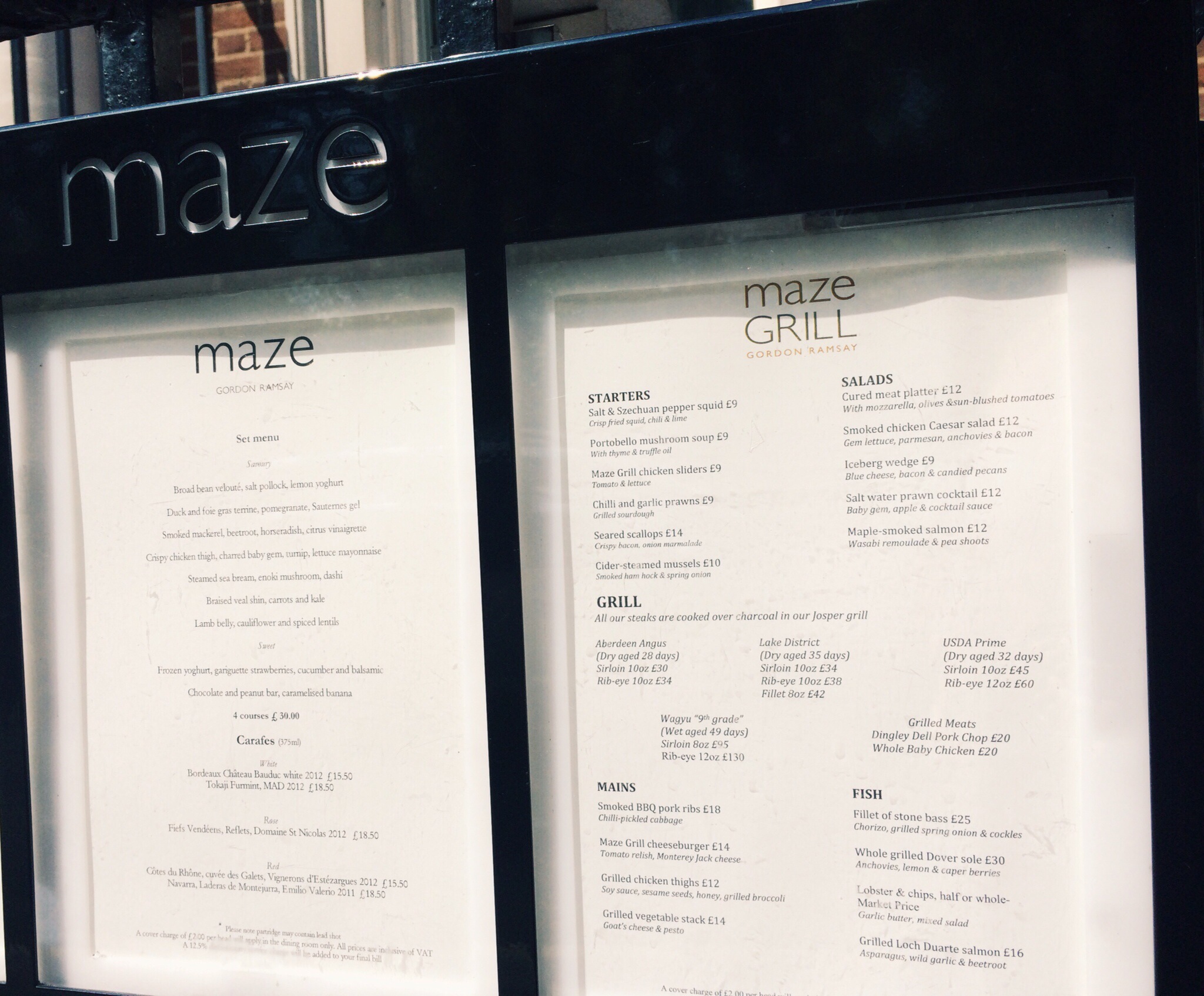 One of the things I miss the most about our pre-baby life is going out for dinner whenever we felt like it; to celebrate, on special occasions, or just because. And often because we had no food in the house, which used to happen quite frequently as we didn’t need to worry about it back then. I miss the kind of lovely dinner where the waiter has to keep coming back to take the orders as you’re talking too much to have even looked at the menu, there’s lots of wine, and trying each other’s food, and too much cheese, and shall we have desert? I’m too full. Really. Oh go on then. As a parent, it can feel like you’re limited to the usual quick pizza / pasta / gastropub affairs where they welcome tiny visitors who run riot, spill stuff and don’t spend anything on booze.

So when we were invited along for lunch at Gordon Ramsay’s Maze Grill restaurant, in honour of a new promotion where kids eat for free during weekend lunches (from 12-6, with every adult course ordered), it took me about two seconds to say yes please. However; children at a Gordon Ramsay restaurant? Eliza is not one to sit demurely at the table when there’s new places to explore and things to see, so we approached our lunch with a healthy side serving of trepidation.

The Maze Grill restaurant is in the Marriott Hotel, just on Grosvenor Square. It’s mere minutes from the top end of Oxford Street but you seriously wouldn’t know it as it’s so leafy and green and well, very Mayfair. We told Eliza where we were going, and she was very excited about on the bus journey over about our trip to ‘the cafe’ where she wanted to eat sausages, chips and peas. Which did make us laugh.

When we arrived, we were taken to the bar for a drink first. I had half a champagne and it was seriously amazing. Eliza was offered contraband orange or apple juice (the waitress actually asked her which she wanted; very sweet). I think this was her favourite part of the whole meal. She did not put her glass down, probably for fear I’d swipe it. 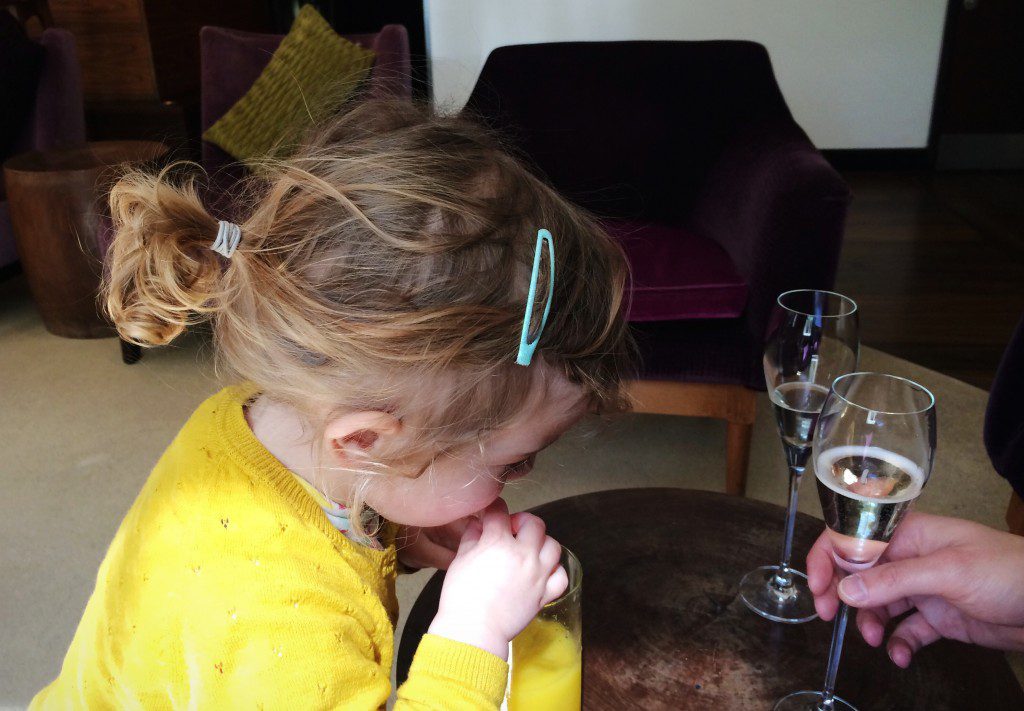 Going through to the main restaurant… 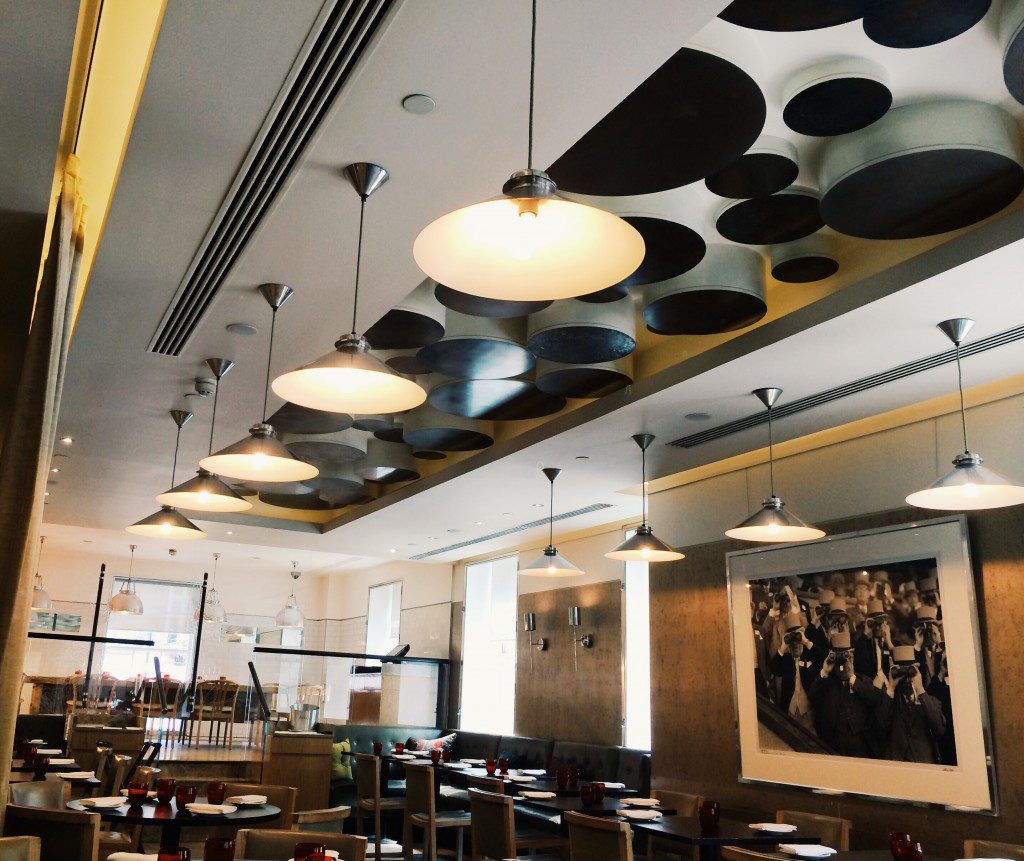 …and children are given their own menu, which is actually printed on a box with crayons and pictures inside. Instant distraction tactics. 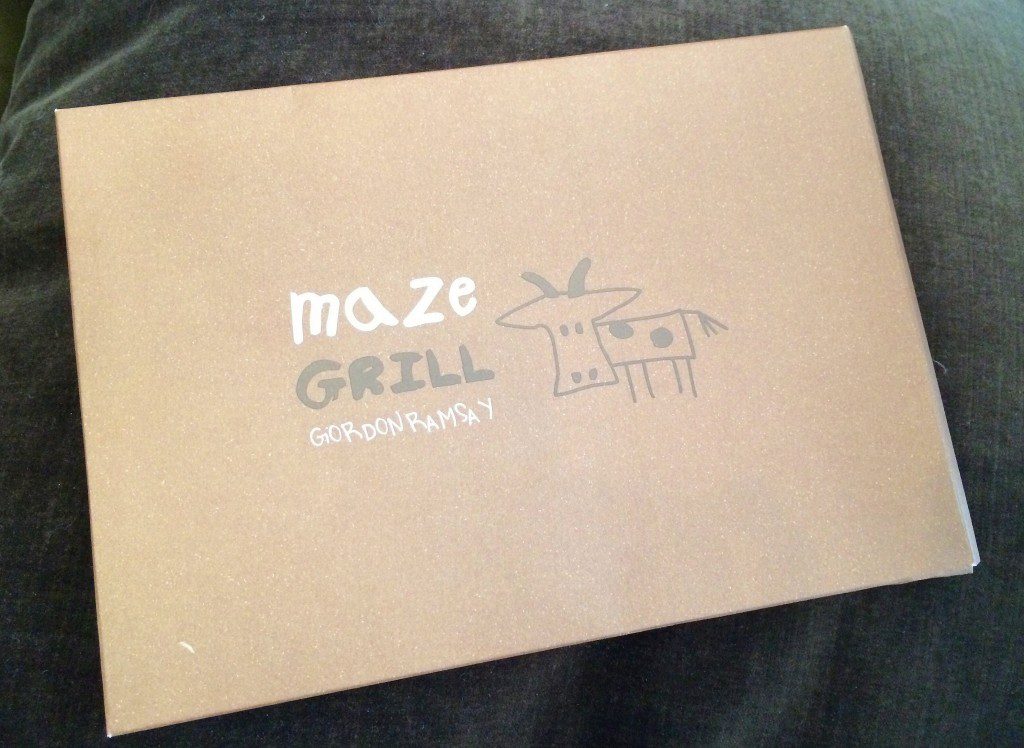 There’s a choice of about five options, including a soup starter. It’s not a huge choice, but then I can’t image most children wouldn’t eat one of them. Eliza picked sausage and mash which arrived within about ten minutes. She tucked right in, and so did we – purely in the interests of research, of course. 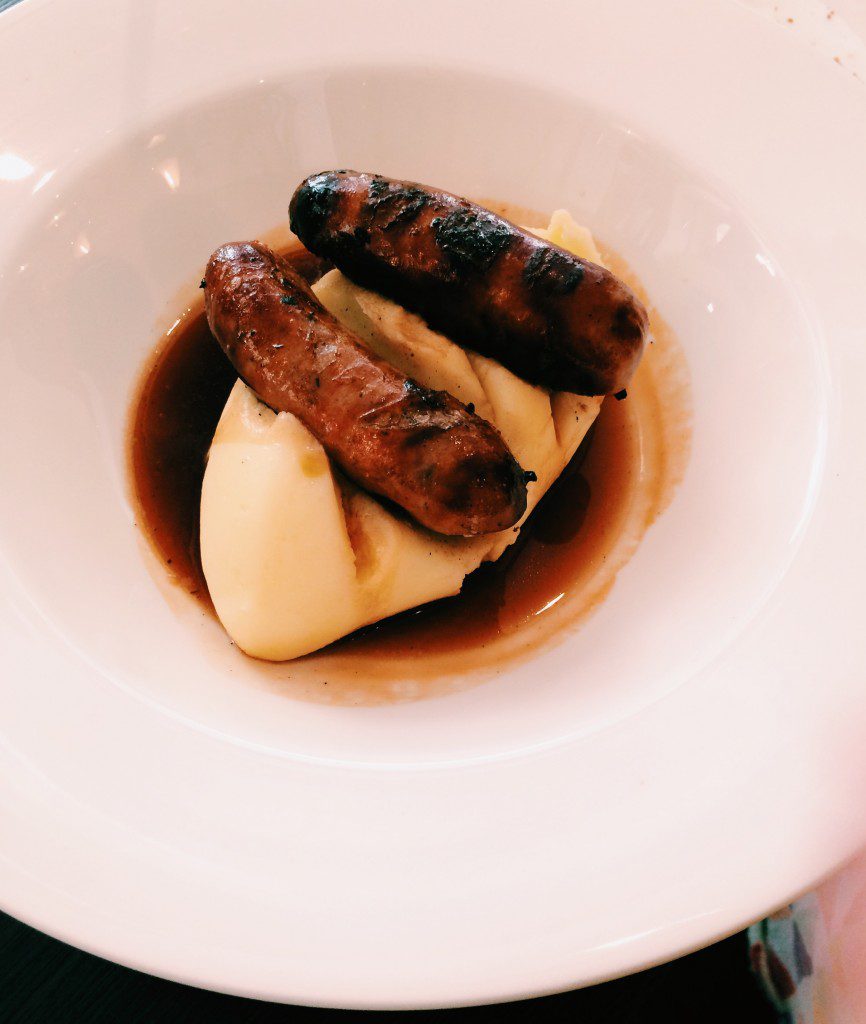 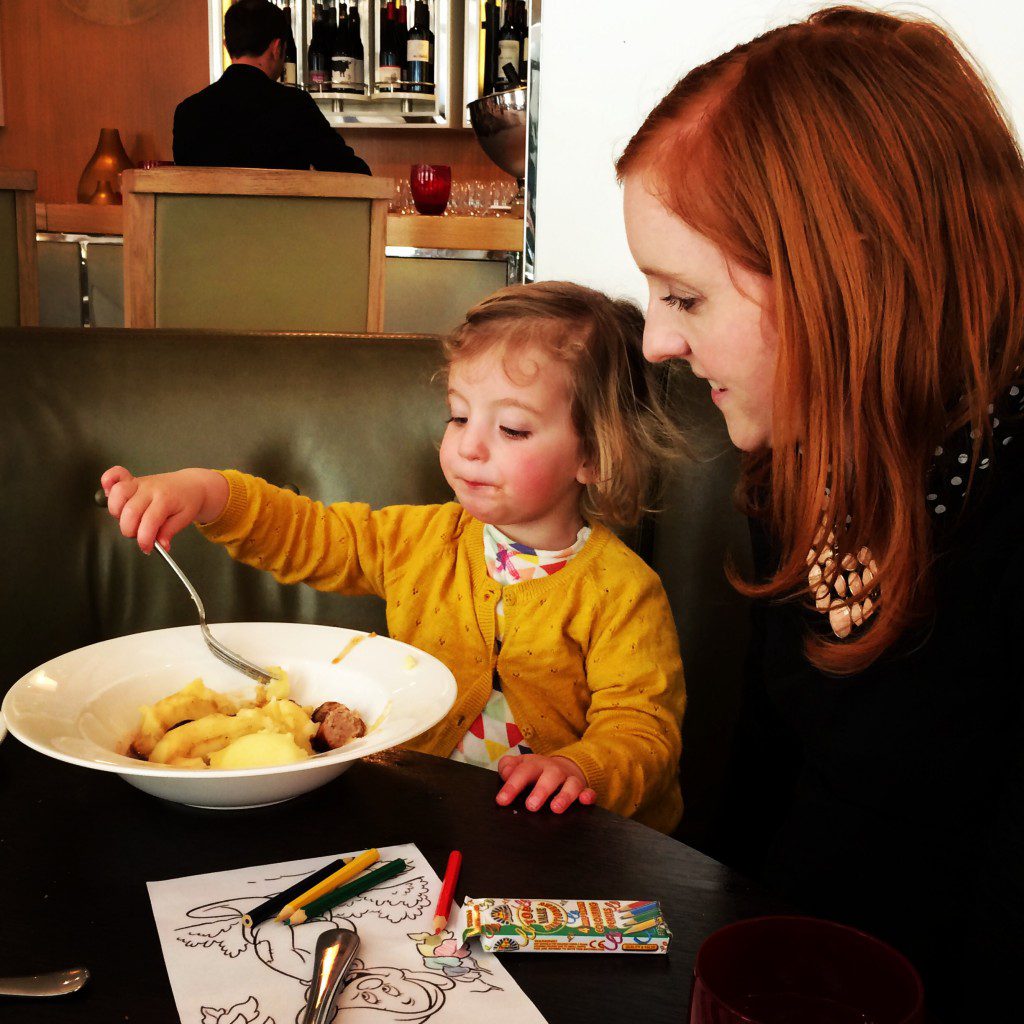 It’s mainly a steak and sushi restaurant, so Alex and I both went for steak. Because you would, wouldn’t you? Despite having to have it cooked for a pregnant person, it was so, so good – I’m still getting flashbacks as to how good it was. I had a complete baby brain moment and went for the blue cheese sauce because the béarnaise had raw egg in it. I didn’t click till it arrived (and luckily it was heated; seriously though!) 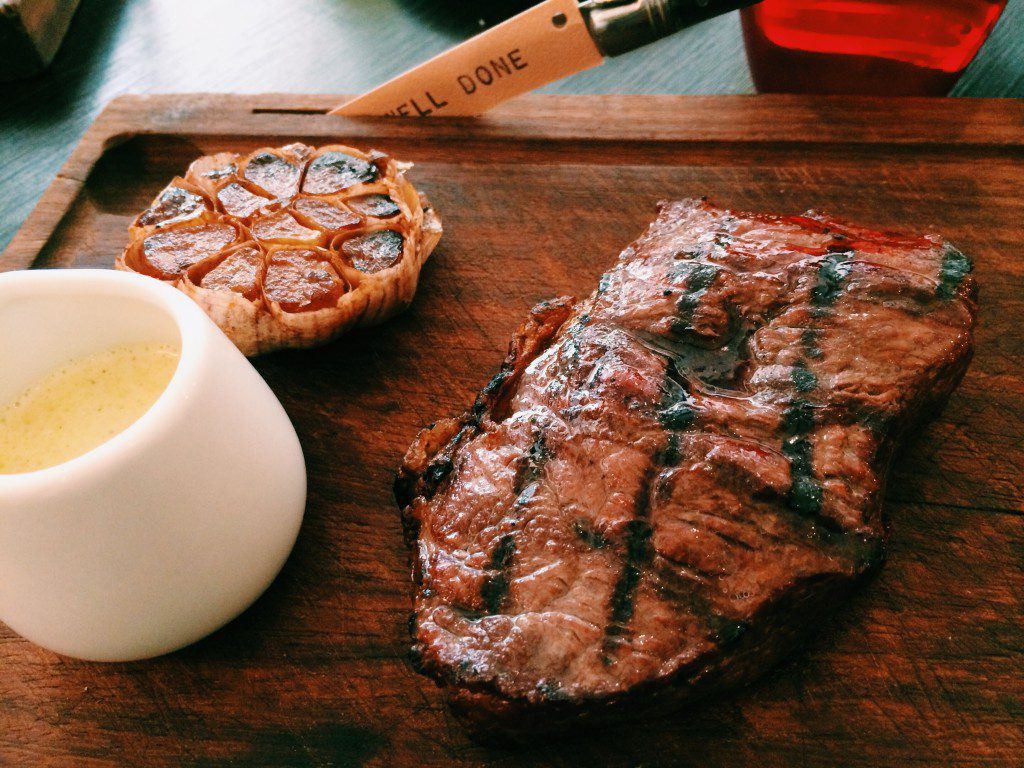 And of course, a little someone helped themselves to our chips. 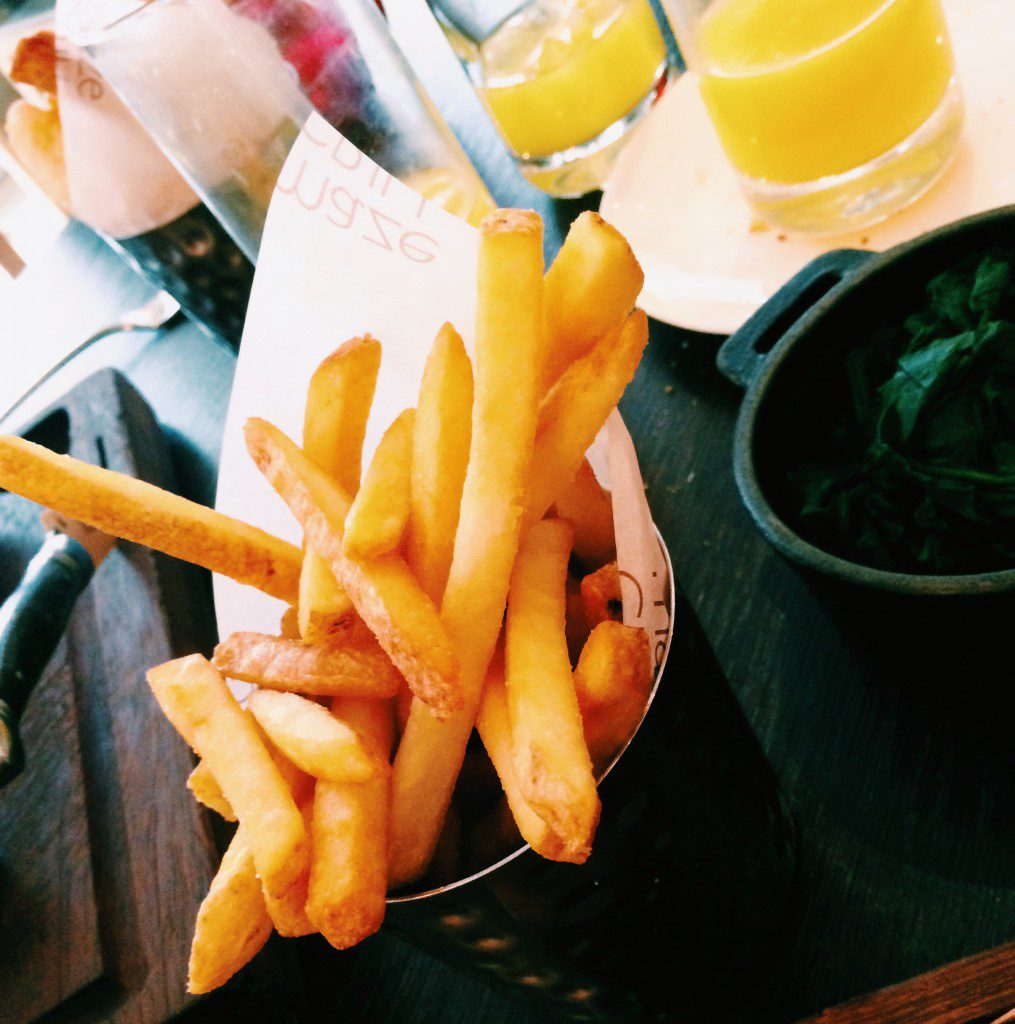 When we’d finally finished – and were too full for desert – we were taken to see the kitchen and meet the chef. It was the calmest kitchen ever, and there was definitely no screaming and shouting going on. 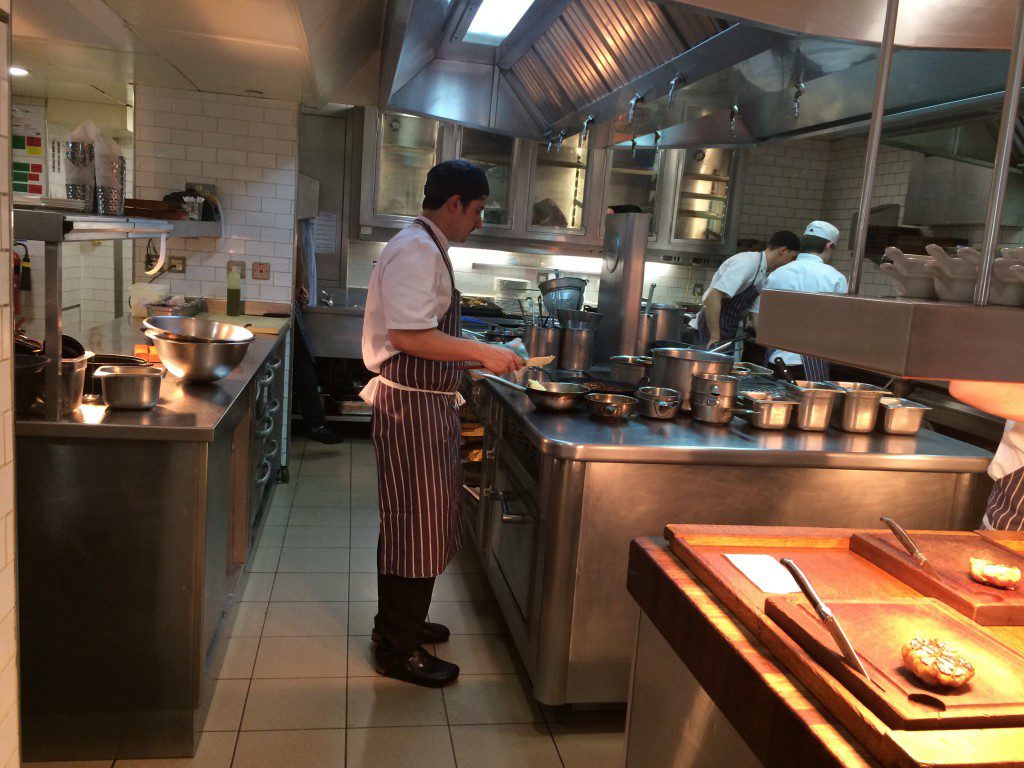 So can children really eat in a Gordon Ramsey restaurant? Yes! Everyone was beyond lovely with Eliza. Not just the people waiting on our table, who paid her a lot of attention, but everyone who walked past did too. She did do a fair bit of exploring away from the table; we were sat near to the hotel steps and she ran up and down those a few times, but no-one minded or made us feel like we were getting in the way. I don’t think we were given special treatment either, as there were a handful of other families with young children also eating, and they all seemed to receive the same attention. There was even a couple with a tiny baby in a car seat; clearly too young to take advantage of the children’s menu, but how lovely would it be to go here for a post-pregnancy rare-steak-and-champagne celebration? 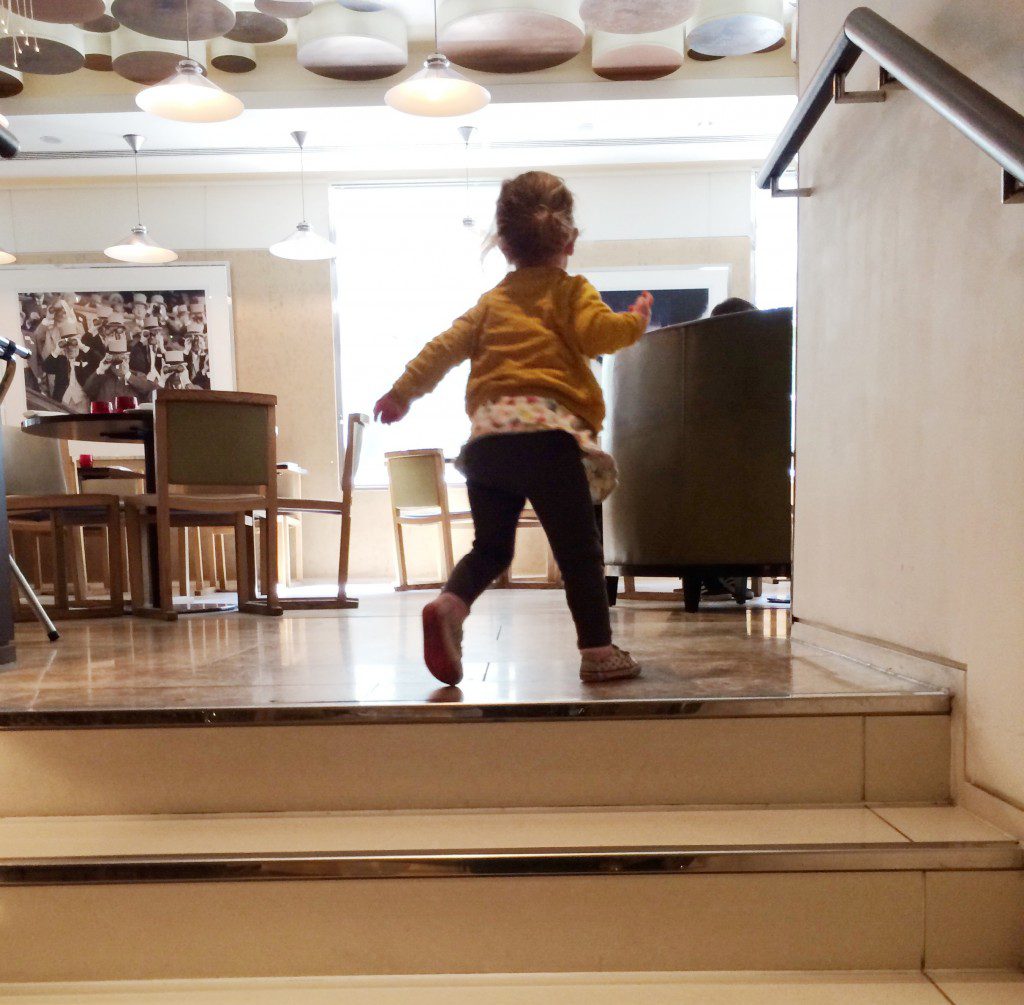 Children eating free at the weekend is a good deal, and it makes a nice change for parents to eat in such a lovely environment. What also surprised us is how reasonably priced the adult food was. The steak is what you’d expect for good steak prices (from around £25+) but if you go for a standard main like the burger, it was only £14.

Final point; I didn’t get to eat in a Gordon Ramsay restaurant till I was 27, and have only eaten in a couple since. So my daughter has just had her first fine dining experience and she is only TWO. Kids today, hey?

We were invited along to the Maze Grill and given a free lunch, for the purposes of this hungry person’s review.