A positive message about public breastfeeding 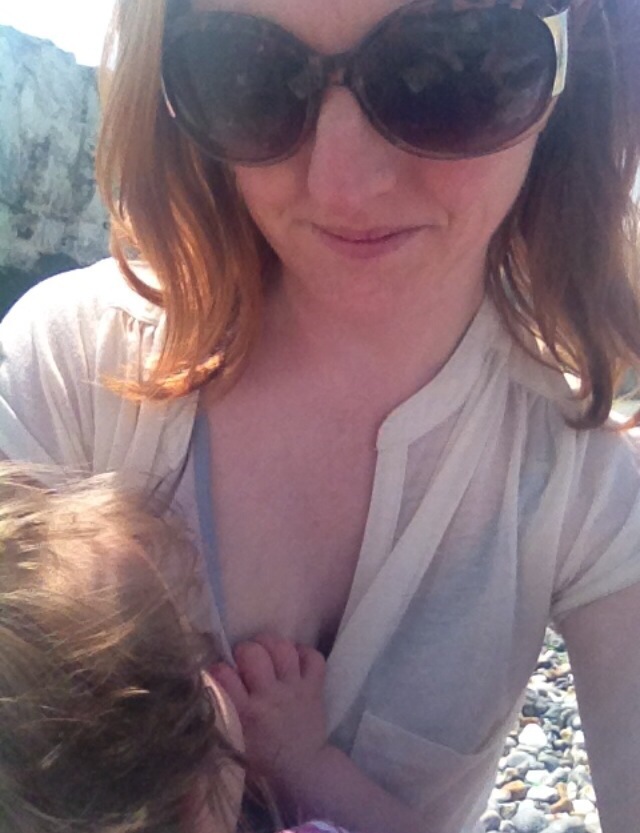 Here’s some of the places I’ve breastfed my daughter in public: cafés, restaurants, shopping centres, waiting rooms, train stations, station platforms, on trains, on a train full of drunken football fans, on beaches and on board boats, on packed tubes and buses during rush hour in central London. In museums, art galleries, at the zoo, at the Olympics. During playgroups and play dates and baby groups, and doctors appointments. Notable, different and interesting places. And hundreds of normal, everyday, commonplace places we went to all the time when she was a baby.

My daughter was breastfed on demand, so we fed her when she was hungry. For the first six months of her life that pretty much meant every 1.5 – 3 hours. And as I didn’t want to stay trapped in the house, this meant a lot of public feeding, often at unpredictable and inconvenient times.

But do you know what? I’ve had nothing but positive reactions. I’ve not once relieved a negative response.

Most of the time people either don’t notice, or just don’t look. Then there was the old lady on the packed bus who tapped me on the shoulder and said ‘that’s so lovely to see.’ The person in the waiting room who told me all about how much they loved breastfeeding their own child, 30 years ago. And then there were the hundreds of people who smiled, caught my eye, or didn’t react at all, making it the non-issue that it really, really is.

I don’t know if I was just lucky – I certainly had a load of responses ready in case anyone said anything – but no-one ever did, to me or anyone I know.

So like anyone who is pro babies, I was equally angry / cross / exasperated / incensed yesterday to read the story of Wioletta Komar, the young mum who was thrown out of a *shall remain nameless* sports retail shop for breastfeeding her hungry child.

Such stories in the press highlight the legal and social injustices against breastfeeding mums, and it’s hugely important that they’re brought to light. It makes me rage that people are subjected to such negativity (and about the idiot commenters who say things like ‘why was she in a shop, shouldn’t she have gone somewhere private?’ Or ‘it’s her own fault for insisting on getting them out and exposing herself in public’ or ‘why do people have to make such a fuss?’) The part that made me saddest about the sports shop story though, was when the mum said it had really knocked her confidence.

But it’s not always this negative – hopefully, and in my experience – and these negative reactions should be the exception rather than the rule.

It is intimidating the first time you breastfeed in public, even if you’re the most confident person in the world, and it can still feel intimidating at first in places where you feel more exposed, no matter how many times you do it. As it goes against all your instincts, doesn’t it? (getting your nipples out…in public?) But it’s about feeding your baby, not being an exhibitionist or making a political statement.

So to breastfeeding mums, I wanted to say, don’t be afraid to feed in public. And don’t read stories like this and let the fear and the idiots put you off. There are so many stories about positive breastfeeding (like mine and millions of other people). Basically, if your baby needs feeding, feed them. Full stop. That’s the priority here.

The photo is of me and E feeding on a beach in France. I’m also talking about how midwives helped keep me breastfeeding over on TalkMum.