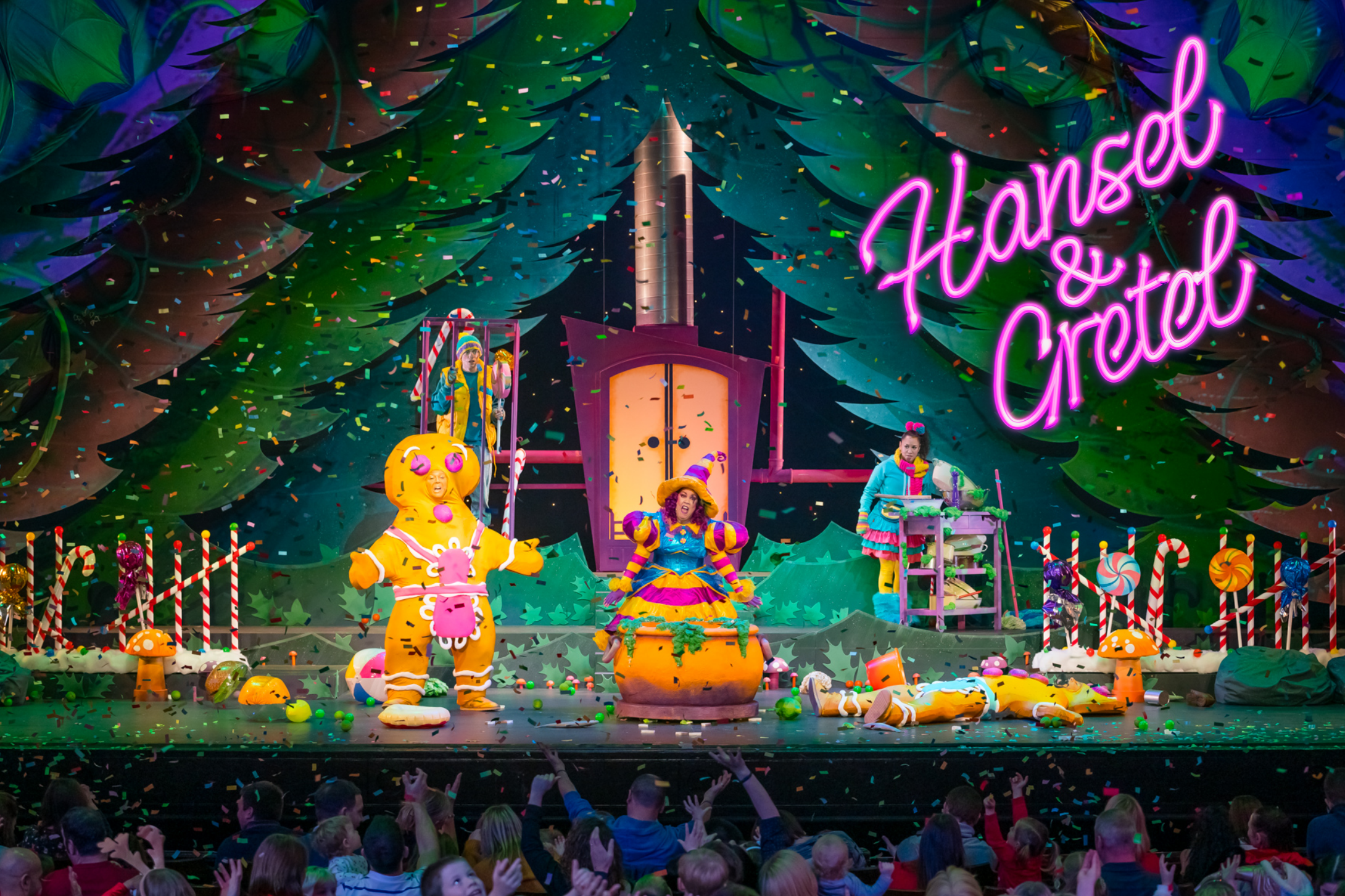 We had a sneak peak of CBeebies Hansel and Gretel, the brand new CBeebies Christmas show – here’s what we thought…

Everyone loves the CBeebies Christmas panto, right? This year the performance is Hansel and Gretel, staring all your children’s favourite CBeebies actors and presenters – including none other than Waffle The Wonder Dog – and has a brilliant 80s theme.

Who Loves The CBeebies Christmas Panto?

We really do love the CBeebies Christmas panto in our house – from CBeebies Thumbelina last year through to The Snow Queen on repeat – Dr Ranj! His wink! Winter Roses! – and the children even still watch older shows like Alice in Wonderland and Peter Pan (usually in the summer, because of course, right?). The CBeebies pantos are inclusive, diverse shows, and fun, festive performances with songs catchier than a cold at soft play.

And most importantly, they allow parents an hour of peace and head space at a busy time of year where you’re more frazzled than a multi-pack of Frazzles.

CBeebies Hansel And Gretel – The Cast

We were lucky enough to be invited to the premiere screening of CBeebies Hansel and Gretel, which stars loads of CBeebies stars.

Everyone you’d recognise is in it, including Maddie! Cat! Rebecca! Justin! Etc etc.

The main characters are Gretel (Cat) and Hansel (Mac from Molly and Mac – who actually sat in front of us and said hi after). I’m not sure who was more excited, me or the children…definitely me.

Hansel And Gretel – The Songs

I’m happy to report that Hansel and Gretel is brilliant, especially the songs, which are as catchy as you’d expect. This year they have a special 80s twist, which is also reflected in the costumes, with neon leg warmers aplenty.

CBeebies Hansel And Gretel – Our Verdict

The best kids TV appeals to both children and adults, and this is where the 80s theme is so good at bridging the generational divide, with synthesizer music, stonewashed denim, shell suits and loads of brilliantly dated cultural references for parents including Mr Maker’s dodgy ‘tache and Hansel and Gretel’s day-glo Walkmans.

The show was recorded live in Edinburgh last month, and will be shown on CBeebies and BBC iPlayer in December. However you can also watch it at cinemas across the country on 30th November and 1st December. It’ll be shown along with a special Mr Tumble singing featurette the children you’ll love and you will, well…

‘Do you think we’ll ever be too old for the CBeebies Christmas panto?’ I asked my children when we left the cinema, singing (note, the we). Luckily, they replied with a resounding NO.

Our verdict on CBeebies Hansel and Gretel is two big Christmassy thumbs up.

We were invited along to a screening of CBeebies Hansel and Gretel free of charge…more posts – CBeebies earworms, what CBeebies The Baby Club gets wrong about baby clubs and the politics of Paw Patrol