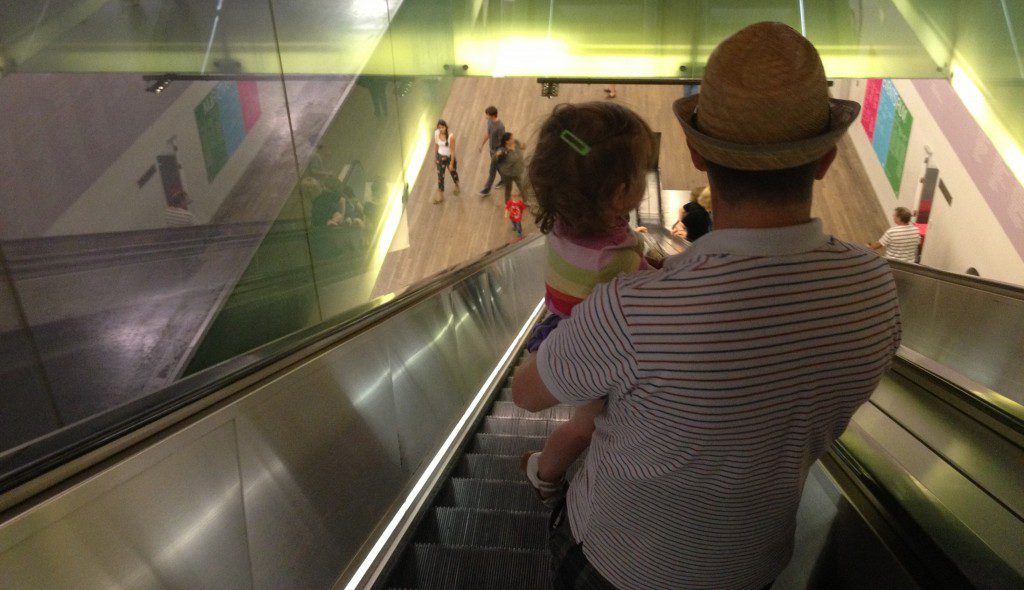 This post was originally going to be titled ‘Meschac Gaba at the Tate Modern, and a walk along the Southbank.’ However, slight change of plans.

Monday was a Bank Holiday, and Alex and I decided to head over to the Southbank and the Tate Modern. We’ve been there quite a few times with Eliza – here and here – not because I’m under any new mum delusions that my child will become a mini pre-school art critic, but because it’s easy for us to get to, really child-friendly and, lets be honest, much less boring for adults than most children’s activities. I’d read that the Meschac Gaba exhibition was really bold, visual and interactive – and great for toddlers. What could possibly go wrong?

It started off well. The exhibition is pretty hands-on, with big puzzle tables and blocks on the floor that children can stack and make structures with. Lots of fun. Confusingly, it also has things at feet level that you’re not supposed to touch – as we were shortly to find out.

We wandered into the next room, with a TV in the corner next to more things on the floor (this time, not for playing with). Eliza spied the screen and parked herself down by it, probably hoping for a peeeg episode. ‘Cute!’ I thought. She looked relatively settled so I got out my phone to take a photo. And then this happened…

She turned her head. Spied the piles of stuff on the floor to the left of her. And pounced. With lightening speed, her hand was mere inches away from the display.

Summoning all his secret goalie skills, Alex leapt over and grabbed her, safely swooshing her away in his arms.

Luckily, it was a fairly noisy room, but she really wailed. And wailed. All our tricks to soothe and distract her – “Look! Some colourful things! Oooooh what’s THIS?” – didn’t work. Nothing was as interesting as the giant pile of cassettes her mean old parents wouldn’t let her play with.

We quickly hot-footed it to the Tate Cafe, which has lots of space, a proper children’s menu that’s not just things with chips, and lovely waiting staff who made a big fuss of her.

To be fair to an 18 month old, what’s the difference between some blocks you can play with, and a big pile of general stuff that’s also on the floor? Where’s the line between blocks and art? So take it from us, dear reader, toddlers and art – proceed with caution. And parents, exercise your reflexes. You’ll never know when you might need them.