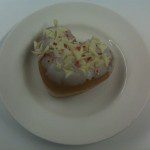 Here are five of the noteworthy things that happened during my 24th week of being pregnant:

Although week 25 was just hiding just around the corner, to make me worry once more.