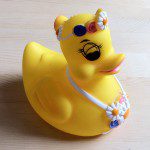 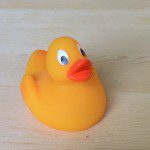 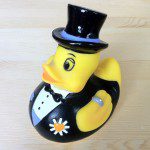 Prior to getting pregnant, I’d perfectly planned out the way I’d tell my husband when it happened. The idea involved a pair of wedding ducks I was given on my hen night, which now live on a shelf in our bathroom. I’d found a mini-duck in a shop in Crystal Palace and post-positive result, I would place it on the shelf, then ever-so-subtly point it out for the big reveal (it took months to finally happen, giving me ample time to over-think ridiculous things like this). However, it turns out subtlety is not my strong point and when the second line appeared, all previous plans flew out of the window and I just ended up just giving Alex the test and bursting into tears.

The mini duck did make its way to live on the shelf eventually, and I was reminded of this story this weekend as we just moved everything out of the bathroom – including the duck family – to paint it (well; Alex painted, I nobly assisted from the sofa). Painting the bathroom was next-to-last on our list of house jobs pre-Baby C’s arrival, which means we now we only have turning the spare room into a nursery left to go.

In terms of everything else, the Clexane injections are fine, although as I’ve been doing them for a few weeks it takes a while to find a non-bruised spot on my stomach (and it hurts!) Aside from that I’m feeling great; loads of energy, still a mini-bump, and only ever-so-slightly knackered. Bring on week 24.