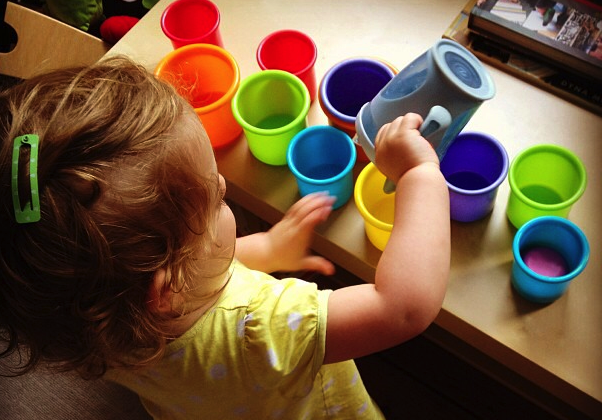 Which of your traits have your children inherited? Apparently handedness may actually be genetic, scientists announced recently. I was interested to read this, as when Eliza first started properly gripping things, she would always use her left one. And as a left-hander, I was delighted.

It’s not so much that I was desperate for her to be left-handed, and indeed have my life-long struggle with scissors and directions. It just seemed that it was a tangible thing that was the same as me. From the moment she was born, and it was obvious that she was very much not ginger or ghostly pale, she’s been likened to so many people in our families. She’s been compared to my Gran, my Great Aunt, my Mum, my older brother, the entire side of Alex’s family, his Dad (matching hair!) and my Dad when he was younger. So many people; just none of them me.

It wasn’t that I was expecting her to look like me. I just didn’t see any of me in her when she was born, and after carrying her for nine months I did think there was something that might make me say ‘Hey! I recognise you…’

Even though she’s much more ambidextrous these days and apparently you can’t tell for sure until they’re three, it seems there’s now a chance that I might be able to claim this as something I’ve handed down to her – no pun intended – in her genetic mix.

Thinking about it, there’s the traits I do want her to have of mine (my love of words and pictures) and those I don’t (taking about three years to tell a three sentence story, always being late). And those from people around me, branching off in her family tree; being happy and strong, resilient through the hard times and positive in spite of them.

But left handedness or not, similar traits to me and her relatives or completely different ones, she’s very much her own self. And it’s a fascinating privilege watching her grow into the person she’s becoming.