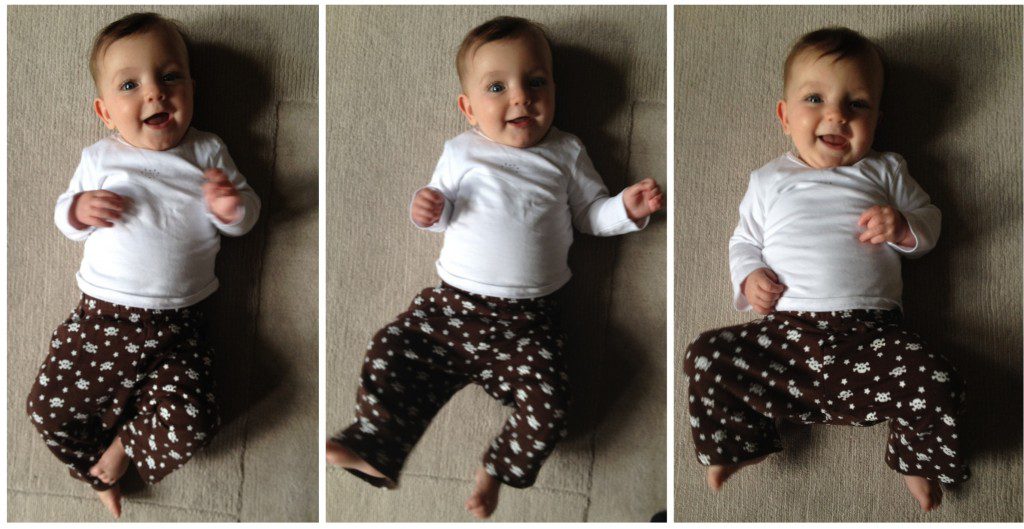 We were sat waiting for baby clinic last week, and when I looked around the waiting room I saw that we were surrounded by shellshocked mums and their newborns. I suddenly realised something I’ve been vaguely aware of for a while; Eliza’s really, really grown. Where did my tiny baby go?

Parenting is bittersweet, but the trade-off of losing the tiny baby is the delight of watching her grow and develop as we put together the pieces of the proper little person she’s becoming. We’re really starting to see flashes of her personality and she’s now so much more interactive, alert, and well, fun.

Recently we’ve had the discovery of her feet and her voice, and she now happily squawks away like a pterodactyl, as well as coming out with proper giggles. She’s obsessed with putting things in her mouth, and at the moment her meal of choice is our hands, which she gnaws on like a giant rib bone, Flintstones-style. And once she tentatively started rolling she now won’t stop. She flips over in seconds on whatever surface I place her on, leading to me coming out with something I never thought I’d hear myself saying – “Don’t lick the changing mat!”

On the not-so-positive front, Eliza’s sleep went haywire approaching the middle of month three (I never want to hear the phrase ‘four month sleep regression’ again, ever). Some nights she sleeps well; we have a magical next day, the sun shines, the birds sing, and we have a spring in our step. Yet some nights she wakes up every couple of hours all night; I revert to biscuits for breakfast, everything is foggy, and it’s a massive effort to coordinate getting us both dressed before lunch. It does help to stop stressing about it and just surrender to the unpredictability of it all (but far easier said than done at 3am when you’re awake…again). She seems to be turning a corner though with more good nights than bad recently, so fingers crossed.

This month marks my mid-point through maternity leave, but to put a more positive spin on it, it means I still have half as much time left and really I’m so lucky to be able to take a whole year out to spend with her. And there’s so much more to come even within the next month; we’ll be starting weaning, and Eliza also becomes a cousin, which we can’t wait for.