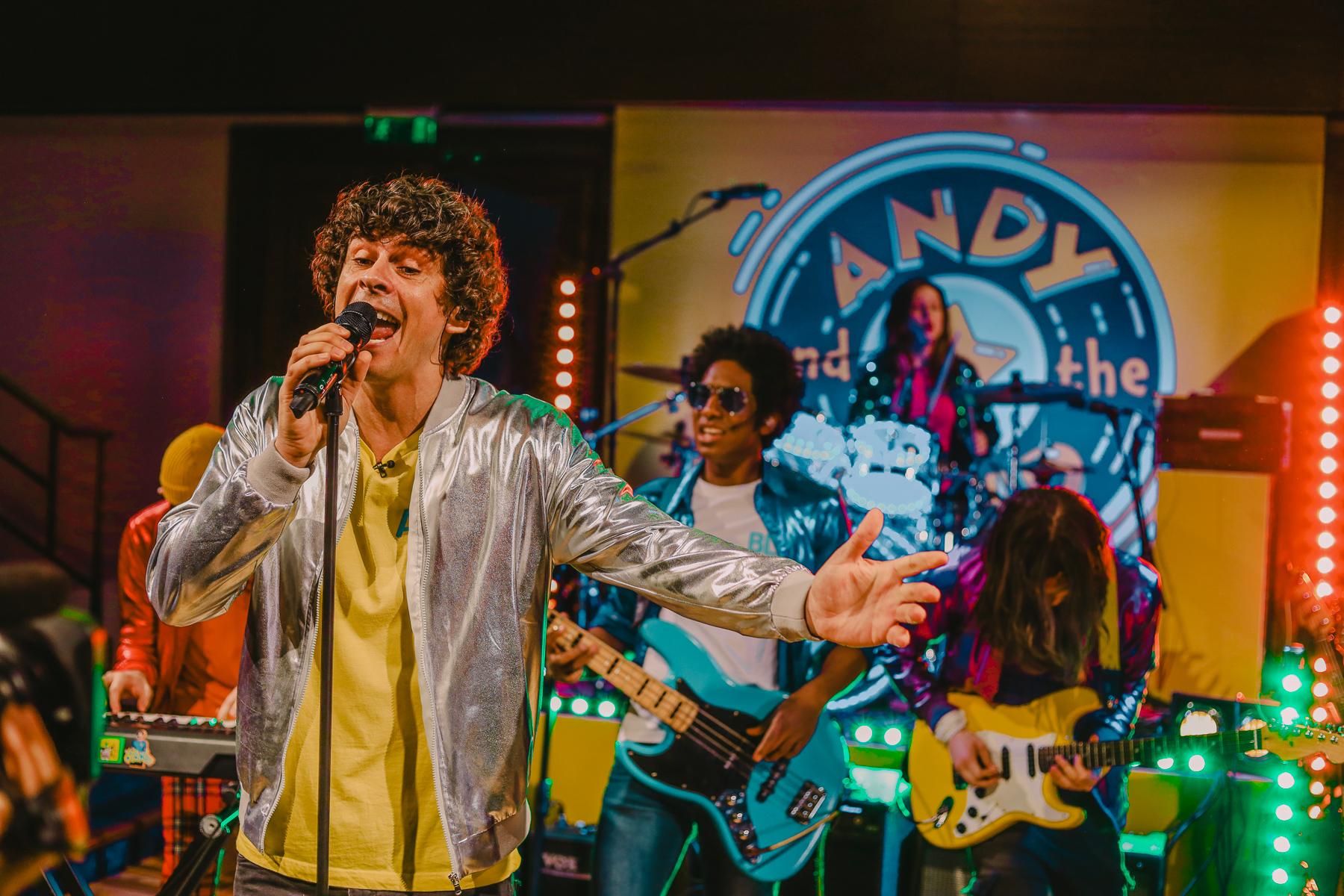 Andy And The Band: Watch The TV Show Once, Sing The Songs Forever

Have You Seen There’s A New Andy Andy And The Band TV Show From CBeedies Favourite Andy Day?

If you – or your children – are a fan of CBeebies legend Andy Day, you should definitely watch his new CBeebies and CBBC children’s TV programme Andy and The Band…

We were invited to a special live launch event for the brand new CBBC and CBeebies TV programme, and the good news is it’s great, but the other news is you’re going to be singing the catchy songs on repeat, possibly forever…?!

Everyone knows – and loves – Andy Day from CBeebies, right? He’s the stuff of children’s TV legend. If you have small children of a similar age to mine, it’s likely they will have watched Andy presenting on CBeebies, Andy’s Dinosaur Adventures, Andy’s Safari Adventures and the CBeebies Christmas pantos…on repeat…and so on.

Andy and The Band is his new TV programme, featuring none other than Andy…and no, not some dinosaurs, but his band, Andy and The Odd Socks, a five piece rock and pop band for children, who’ve even played at Glastonbury.

In the programme, Andy and the band solve a series of fan dilemmas while out on tour, despite the attempted sabotage of their fame-hungry manager (there’s usually a musical solution resulting in happy fans).

We Go To The CBeebies Andy And The Band Live Launch

We were invited along to the live launch event for the show, with a performance from the band and a live link to CBeebies where the show was officially launched by Dodge, the CBBC dog (*cough* don’t mention he’s a puppet…one of my children was startled to realise that).

(I mean, live on CBeebies? I’m not sure who in our house was more excited, to be honest!)

Both my girls want to be Moxie, the female Andy and the Band drummer because ‘she is THE COOLEST.’

It’s great – really fun, funny, silly and has what all the best children’s TV programmes have, which is lots of in-jokes for the adults. And the music’s great too.

We watched two episodes at the launch event and then the rest at home on iPlayer over the weekend. And we’ll probably watch it again, most days.

As a side note, it really warms my heart and brings *something* to my eye that there are people like Andy – who seems like the loveliest guy, – who dedicate their whole careers to making children happy. How amazing is that?

Where Can I Watch Andy’s New Show?

You can watch Andy and the Band:

We were invited along to the launch event for Andy and The Band...apologies for any musical earworms you develop as a result of watching the show…