I am a member of the Collective Bias®  Social Fabric® Community.  This shop about buying all the ingredients for a family party and night in has been compensated as part of a social shopper insights study for Collective Bias and its client. 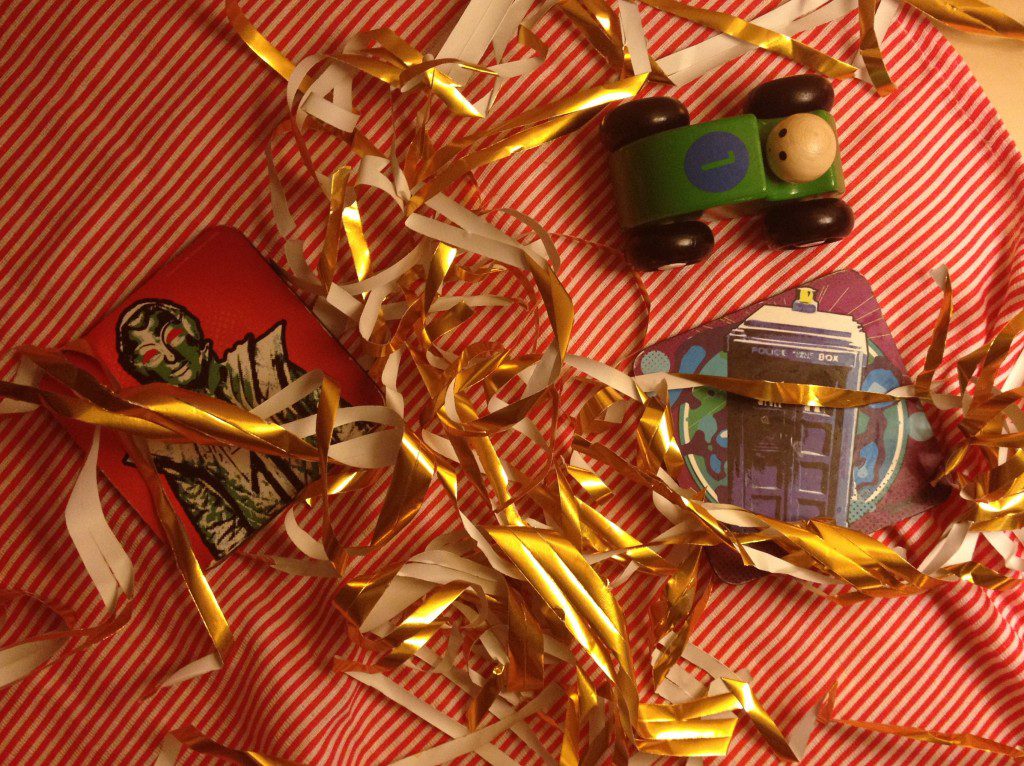 It’s looking like we’ll be moving soon (fingers crossed, still-don’t-want-to-jinx-it-yet though). The whole process has dragged on and on for months, but we now actually have some dates on the table. So the run up to Christmas is looking busy; as well as the move, we have birthdays, trips out and a weekend visit to Sheffield planned.

I wanted the three of us – Alex, Eliza and I – to spend some quality time together as just our little family before we’re knee deep in packing crates, dust and removal vans. We also wanted to say goodbye to the place we bought our tiny newborn home to; her first home, and the place where she’s grown up to be a tall toddler of nearly two years. So we planned a flat leaving party for last weekend. The opposite of a house warming party, it was to be a cosy but low-key affair with just the three of us.

As everyone knows, the backbone of every good party is planning. And supplies. So we headed off to the big Sainsbury’s in Sydenham, which is a short bus ride from our house. It’s huge and sells everything, including clothes, homewares and electrical goods. It’s a change from most London supermarkets, which are of the mini or metro scale.

So first, food. We checked out the Christmas snacks and confectionery: 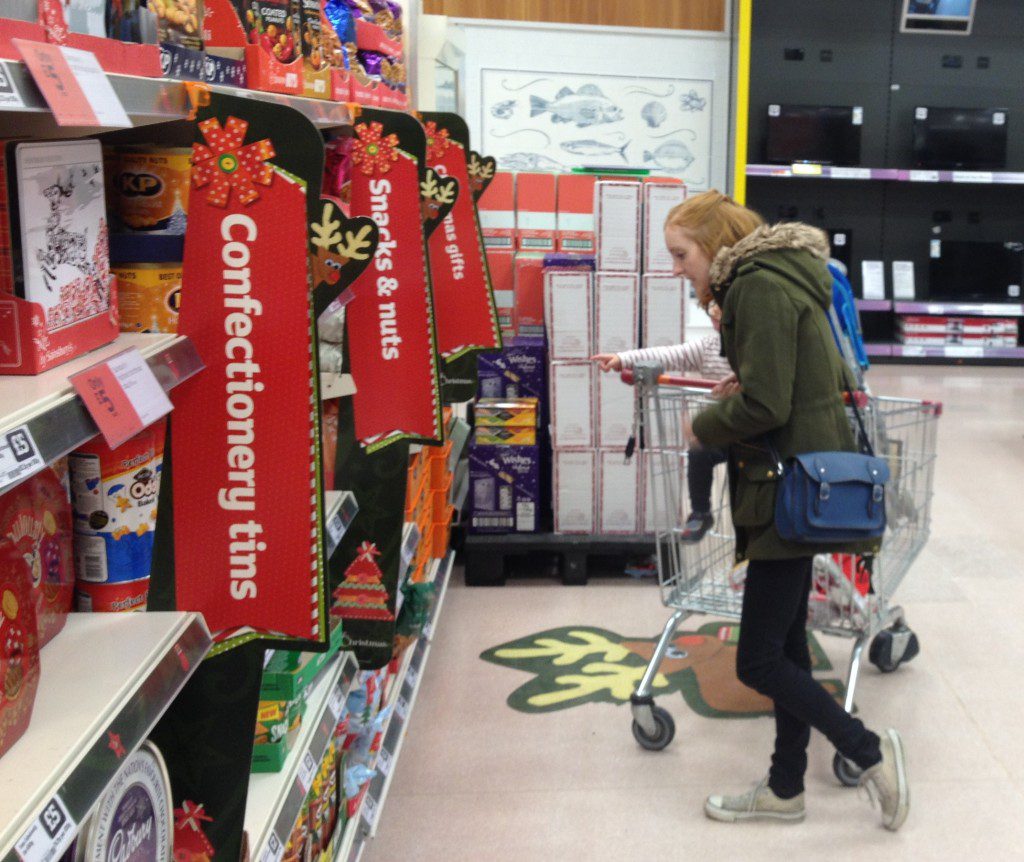 And my favourite of all, party food. As it’s Christmas there was a good selection, ranging from your fairly standard sausages wrapped in bacon, through to Indian, Japanese and Tex-Mex. 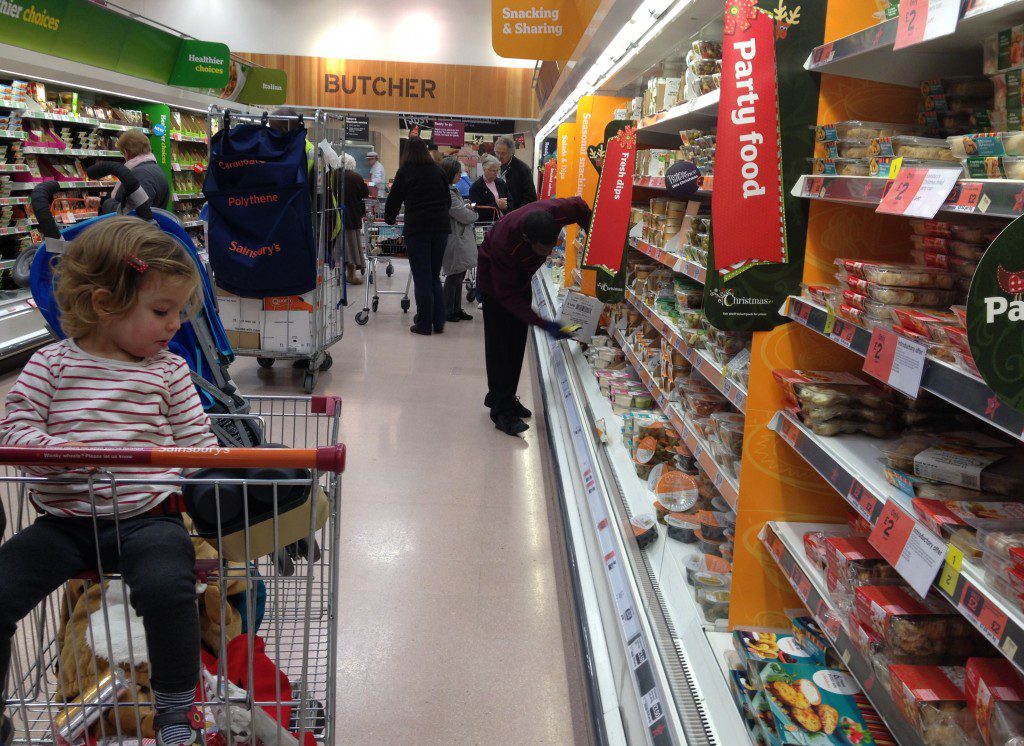 And of course, everyone needs a good party dress, right? We had a quick look at the Sainsbury’s children’s clothes (we’ve bought Eliza lots of bits from there in the past and we picked up a Christmas jumper for her this time). However, then we spied the next aisle over, and the children’s fancy dress costumes. There weren’t many of the smaller sizes, but one outfit in particular was a hit with everyone – the Gruffalo’s child (£15). Into the trolley it went. 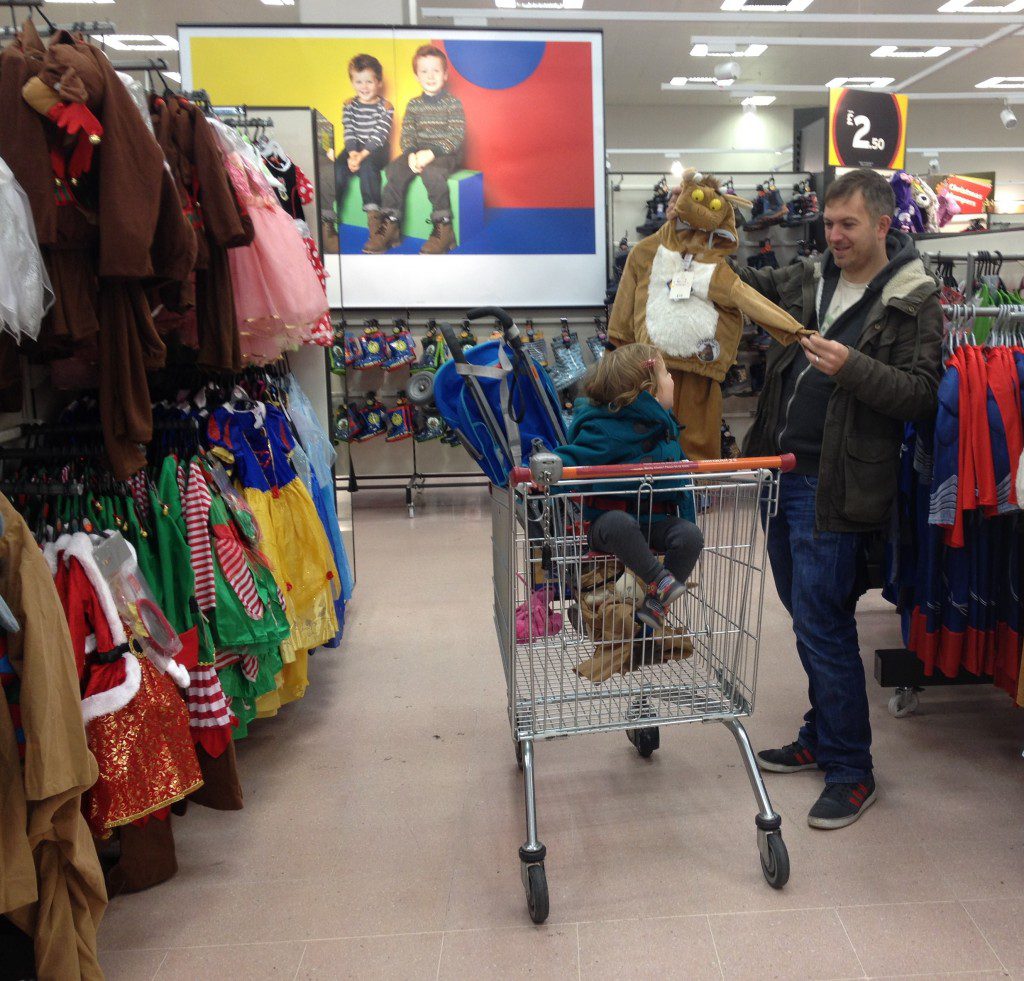 Once we were back at home, we put on our special party playlist to get us in the mood and decorated the flat with the gold and silver streamers we’d bought from the party aisle. One of us got changed into their Gruffalo outfit. 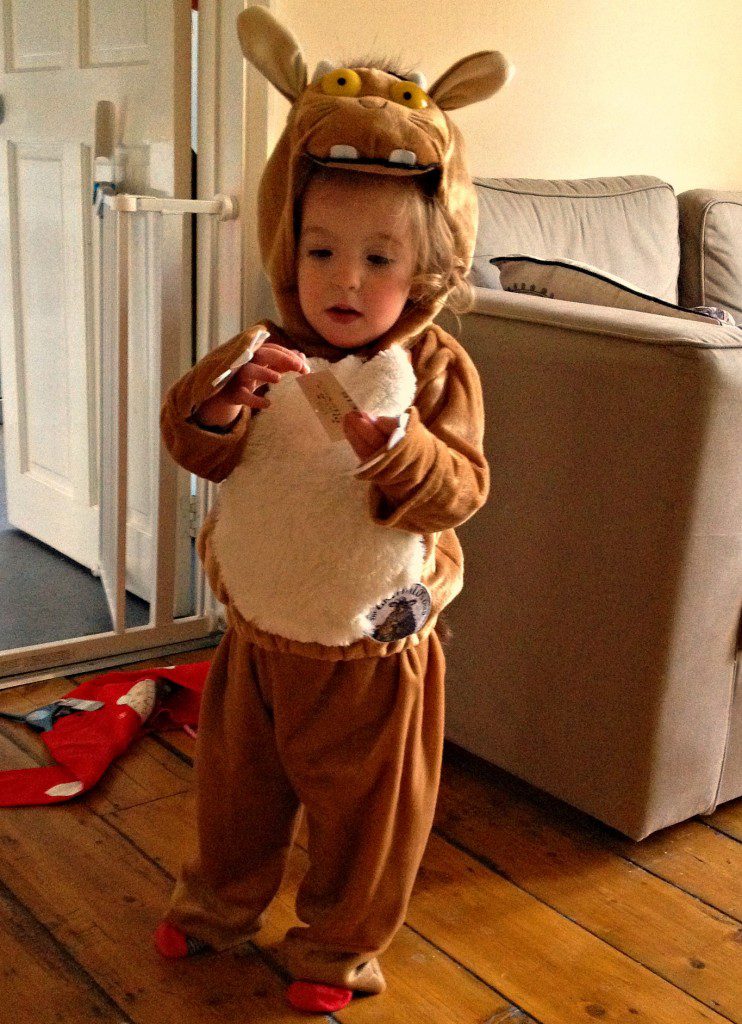 There was a living room disco and dancing. One of us took off their Gruffalo outfit and put on a party sweatshirt instead.

And then it was time for our incredibly retro party buffet. We’d bought a selection of Sainsbury’s party snack food including mini kievs, Indian starters, cheese and mozzarella sticks, a party pizza, Christmas pretzels, dim sum and of course hummus, olives and carrot sticks. Probably not the most healthy mix but hey, carrots and olives! 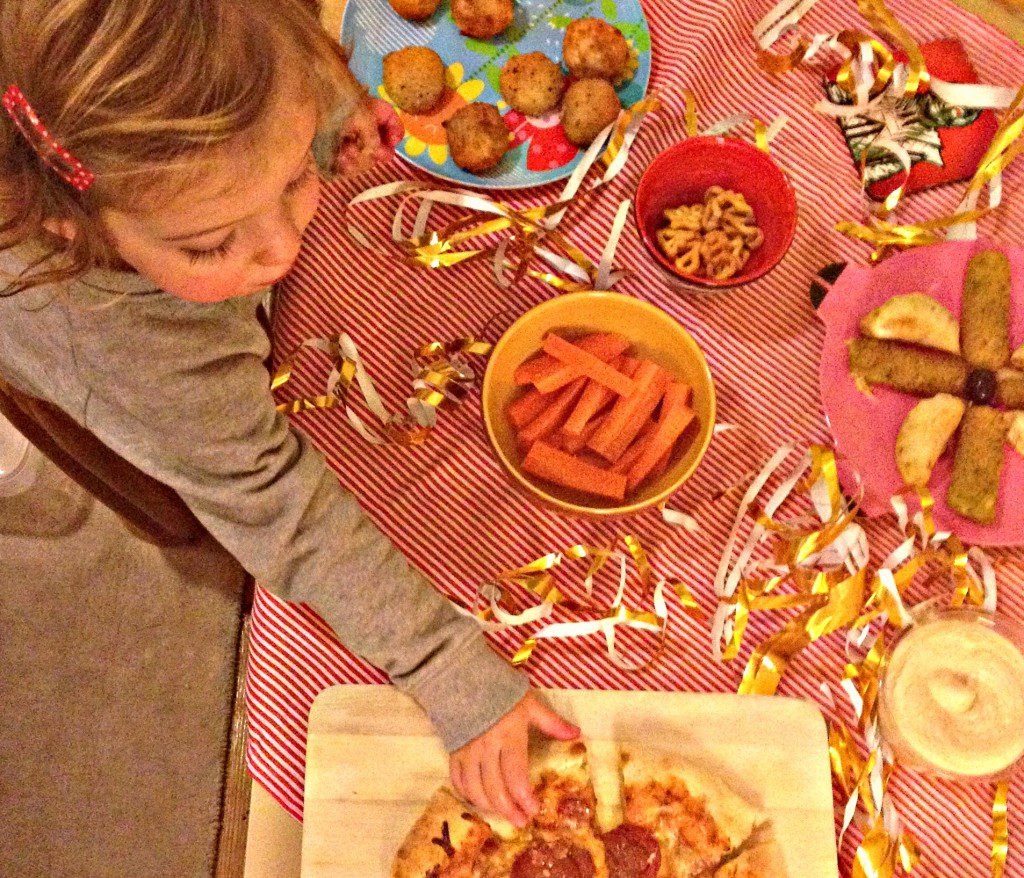 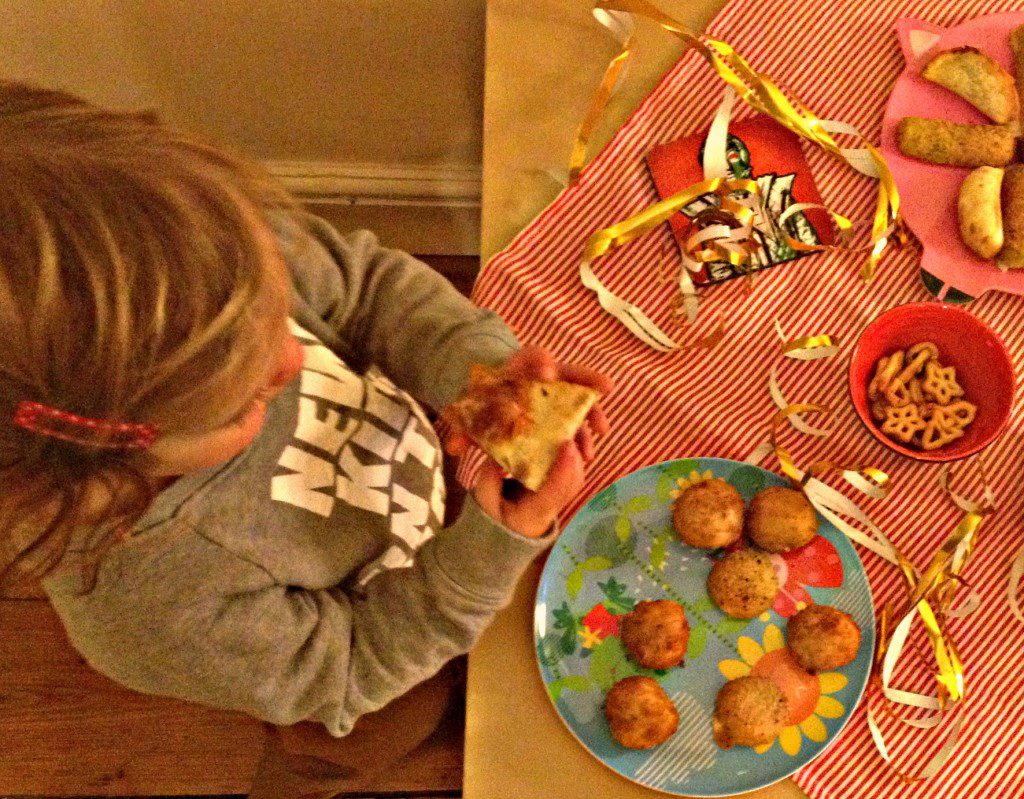 As always, the hummus was a big hit: 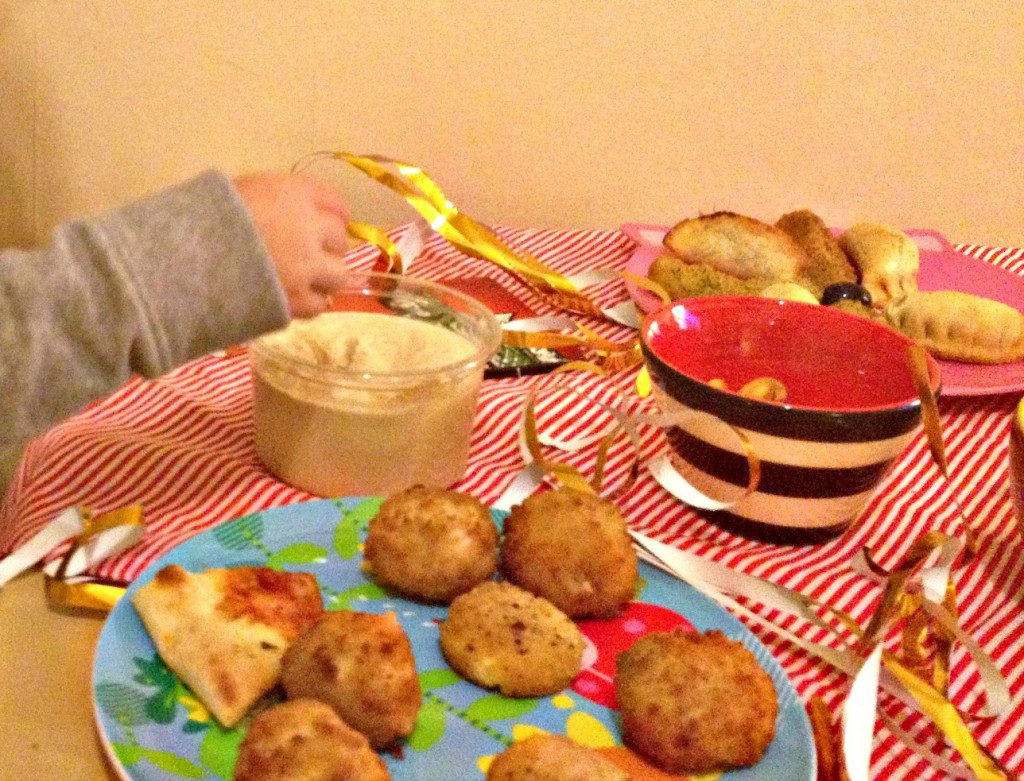 After dinner it got really crazy with some crayoning (what else?). At the end of the ‘night’, one of us fell fast asleep in bed and the other two ate the rest of the food while lying down on the sofa with giant glasses of the wine we’d bought from Sainsbury’s earlier. And watched Dr Who.

As with any good party, what makes it is the people on the guest list. And for us, as well as saying bye to our flat, it was about spending time together. As I always tell Eliza and Alex, they’re my two favourite people in the world and there’s no other people I’d rather spend time with. The next few weeks will be hectic, but I’m so excited about our future. And it was a lot of fun to spend this time together ahead of it.