Last week I went along to the launch of the Nipper Clipper, the new baby nail clipper and app made by Apprentice winner Tom and none other than LORD SUGAR himself (you can read all about the event over on TalkMum).

I don’t know about you, but we dreaded cutting newborn Eliza’s fingernails. It’s strange to think it now, as she runs around the house pulling big things off shelves, but her fingers were just so tiny. It was the awful dread and fear of accidentally nipping her flesh…it gives me chills even now to think about it. It does get easier as they get bigger, but they also get wrigglier too. 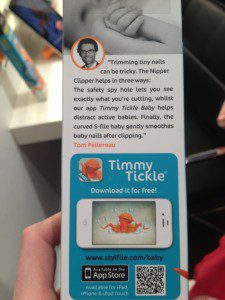 So when I was given a pair of the clippers at the event I was intrigued to try them out. We’ve been using them for the past week and I am impressed so far – they have a side-to-side scissoring motion instead of one chop from the top, which means you have more control over the cutting direction. There’s also a spy hole in the top so you can actually see what you’re doing.

And while they are great, it’s the app that’s the genius idea. At the event, Tom – himself a new dad – said he thought of various different options, but figured distraction was the best tactic. You prop the iPad up near you for the child to watch while you clip away, diverting attention away them from the task in hand. It features the character of Timmy Tickle, a crafty little octopus who transforms into various different characters while icons rain down the screen (a strawberry, a banana, a pirate among others, and a vampire – which seems a bit sinister for little children, but that’s my only criticism). And it really works; Eliza makes an ‘oooh’ face while she watches it, and I did both of her hands and feet in one sitting, which is unheard of. I even sprung it out when we were at the dentist. 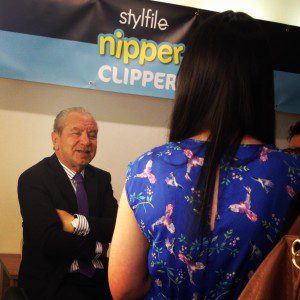 Nail clipping is really that traumatic for parents, so anything that can help is a bonus. And it seems the Nipper Clipper and app really might help to nip your nail clipping fears in the bud. It retails at around £9.99 and will be available from Amazon, Sainsburys, Boots and Mothercare.

P.S. – I’m totally cool in the face of celebrities, of course, but here’s the man himself at the event…