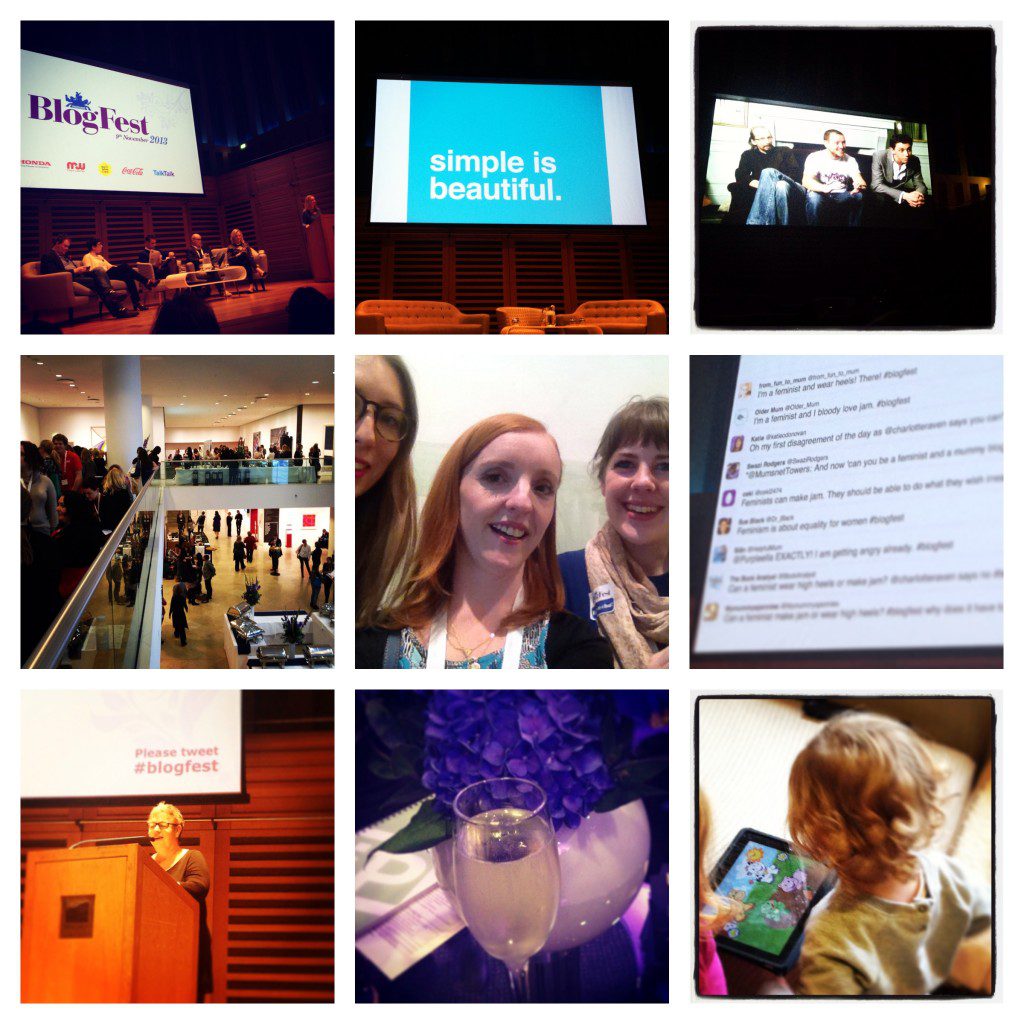 This weekend I went along to the Mumsnet Blogfest (photo 1, top left), a blogging conference organised by parenting website Mumsnet. And without wanting to spoil too much of this post upfront it was great; useful, interesting, thought-provoking, inspiring.

House of Fraser approached me to sponsor my ticket – thanks so much – and as part of the day I took over the HoF Instagram feed. So here’s a selection of the photos I took throughout the day, and the significance behind them…

I thought most of the keynotes and sessions were fantastic. Photo 2) is a snapshot from the advanced social media tips section, which I was surprised to find useful. I really enjoyed ‘How blogging and social media can change our world’, excellently chaired by Helen Lewis from The Spectator and with the fab Mummy Barrow on the panel talking about Team Honk.

My favourite session was ‘Future minds: how will technology shape how we think?’ Tanya Byron and Sue Black were great, and having recently written about how much I love technology, it was really interesting to hear about the #TechMums initiative, which aims to empower mums through tech education. And as a long-time reader and watcher of his work, I was really looking forward to Jon Ronson too, and 3) is from a video of when he confronted three professors who’d set up an automated Twitter spam bot of his feed. It sounds as surreal as it was, and I’m not sure how serious the whole thing was, but it was really, really funny.

It was held in the same office as The Guardian (photo 4) and as always with conferences, one of the best parts is meeting up with other bloggers – 5) here’s me, along with Fritha and Rachel. As well as more familiar faces, I got to meet lots of new people as well as others I’ve followed for a while. Everyone had interactive badges that you swiped to exchange contact details, which are now stored for us to access later – how good an idea is that?

Moving on to 6) the controversial and much-discussed  ‘can mummy bloggers be feminists?’ panel. Which had, I thought – despite the answer to the question being yes from the start – a lot of potential, especially as the panelists were all interesting and inspiring women with strong views.

I don’t want to go too much into the debate (I think a lot of the audience tweets were spot on, but also that some of what was said was taken out of context; feelings were running high around what were clearly emotive subjects). However, I did feel that a big negative was panelists either not knowing much about mummy blogging, or having an incorrect and stereotyped perception of mum blogs as a pastel-hued, picture-perfect vision of Stepford Wife-esque domestic life. And I’m sure it wasn’t intentional, but it meant they came across as incredibly judgemental. The only person who I felt really got it was Alison, and her opinions were shared by a big portion of the audience judging by the really positive reaction she received.

All of the mum-focused blogs I read – and the one I try to write – are predominantly realistic and honest about the ups and downs of motherhood and family life. And they cover all manner of subjects – from those in the traditionally domestic sphere around babies, teething and cooking, yes – but though to more lifestyle-focused topics such as fashion, travel and beauty and also campaigning, education, working, earning money and causes people are passionate about. There is an element of domestic life, but for most bloggers it’s about reclaiming and recording it, and making it our own, on our terms and most importantly through our own choices. And even if your blog does cover making cupcakes for your husband, if that’s your choice, what’s wrong with that? Just because you don’t write political essays, as an example, doesn’t make it any less valid. Or you any less of a feminist, if that’s what you identify yourself as. Ultimately, there’s no right and wrong way to blog. There’s so many different ways to be a mum, and millions of different ways to be a blogger. It’s about you, choosing what to write about on your terms.

(And as an aside, I also thought it was a curious criticism about working with brands and commercialising your blog. Family life and motherhood has been commercialised by brands for years. So why not take some of that power back yourself, especially if it means you can earn money and support your family? You chose to decide the extent to which you put yourself and those closest to you online. And again; there’s no wrong or right way to blog).

Following on from that, Jo Brand (photo 7, bottom left). Who with good – comic – timing, was funny and brilliant, and 8 ) drinks, which were a chance to discuss 6) and meet lots more bloggers.

9) And finally, not a photo from my day but one Alex sent at lunchtime of Eliza’s. She had a playdate with one of her friends, iPad, cake and a whole day of uninterrupted Dad time. It was the first time in days I’d not been with her, and although it was great to finally have a break I really missed her little face by the end of the day. But it was definitely worth it for the sessions, the inspiration, and meeting lots of new bloggers (and also, wasn’t the goodie bag brilliant?!).