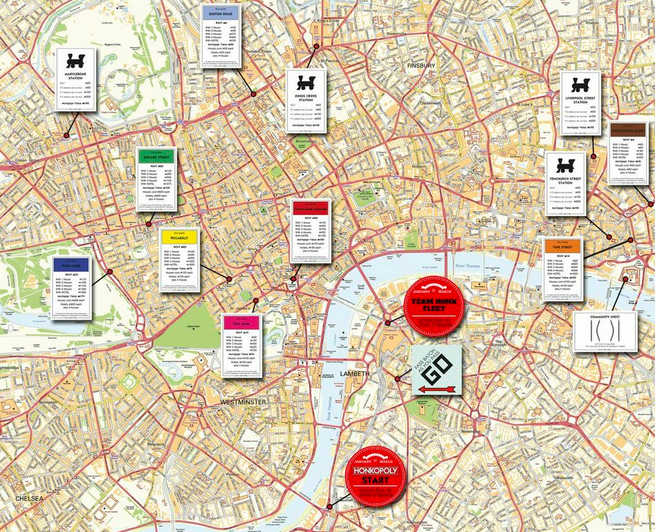 Q: What do you get if you cross a charity challenge, a whole load of London bloggers, and our capital city? A: Why, it’s Honkopoly for Sports Relief – part of the 2014 Sports Relief Challenge.

And tomorrow, it’s the turn of London, and a whole team of bloggers – including me – will be walking, London-bussing and Boris-biking at a hectic pace around the city on the route of the Monopoly Board (all dressed in a variety of giant t-shirts and hopefully quite ridiculous Monopoly costumes). The London Team Honk organisers – Vanessa from HPMcQ, Sarah from Grenglish and Sophie from Franglaise Mummy– have devised an amazing route and accompanying artwork, and even did a dry run of the entire route in the pouring rain (plus, two of them have a birthday tomorrow).

Of course, this is all in the name of charity and raising money for a fantastic cause. So, I’d love it if you could sponsor us. Thanks so much!

And if you’re interested in actively getting involved with Sport Relief, the first ever Sainsbury’s Sport Relief Games take place from Friday 21st to Sunday 23rd March 2014. The public can join the fun and games by running, swimming or cycling their way to raising cash at over a thousand venues around the country, including the landmark events at Queen Elizabeth Olympic Park.

As one of the biggest fundraising events, Sport Relief brings the entire nation together to get active raise cash and change lives. The money raised by the public is spent by Comic Relief to help transform the lives of some of the poorest and most disadvantaged people both at home in the UK and across the world.